Everything Was Fine Until… 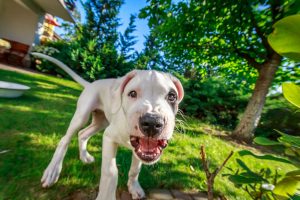 When a dog has a clean bill of health and yet his behavior has suddenly changed, behavior consultants are advised not to accept labels from their clients, but to dig deeper for detailed specifics of behavior © Can Stock Photo/MarcinSl1987

Does this sound familiar? “Everything was fine until… [fill in months, age, event].” It’s a statement that is common, and sometimes accepted without much thought. For example, a client might tell us that their puppy was a saint until he turned 7 months old. Or that there were no problems until Grandma Tilley came to stay for a week. Perhaps a new neighbor was bitten, or the owner was nearly pulled into the street when the dog spotted a squirrel. Whatever the precipitating event(s) that brought the client to us, understanding when the problem began can be helpful. So we ask, “When did this start?” and we are assured that everything was fine until…

As trainers, if we begin without closely examining that possibly false premise, we may go down the wrong path. If the statement is true, then it is a critical piece of information which should lead us to a discovery of what changed for the dog. Sudden, abrupt or significant changes in behavior may point to a need for a thorough veterinary exam, as well as detailed info on changes in the household.

Environmental Changes
I remember one client presenting a dog who had been fine but had become “suddenly” very irritable with the other canine family members. There was not a history of any serious conflicts. I asked a lot of typical everyday questions and kept coming up blank with nothing that might explain the dog’s behavior. Diving in deeper, I asked about household schedules, work changes, illnesses, new neighbors, construction nearby, etc. To my surprise, we finally stumbled upon a minor comment about how the dog seemed to dislike having to share the backyard with the sister-in-law’s dogs. Since sister-in-law (and her dogs) had not been listed as living in the household, I wondered how and when this sharing took place. I nearly fell off my chair when the client casually noted, “Oh, she and her husband and their five dogs are living in our basement while their house is being remodeled.” Surprised, I asked why she hadn’t mentioned this as a change in the household. Her reply, “Well, they’re just going to be there for three to four months, so not a big deal.” Clearly, it was a big change and a big deal for her dog, though it wasn’t for the client.

Everyday Scenarios
How carefully we question what’s presented can make a big difference in what we do with and for the dog and client. In this scenario, it wasn’t rocket science to see that the dog really had been fine until two more people and five dogs moved into his home.

When a client tells me that everything was fine until day X, we then have a chat about what “fine” looks like. I typically take them through everyday scenarios. I am interested in finding out what the dog’s behavior was like back when all was “fine.” Here are some questions I might ask, depending, of course, on what the client presents as the problem.

• When you handle the dog’s body for bathing, grooming, nails, wiping muddy paws, administering meds, wiping eyes, does he quietly accept the handling? This does not mean that the dog is necessarily enjoying the handling, but that he is willing to accept it and be reasonably cooperative.
o If the dog is not quietly accepting, why not?
o To what degree is there resistance?
o What does it look like when he protests?
o Does the dog have to be forcibly held? By one hand in collar? On leash? By more than one person?
o Is medication necessary?

• If you really insist, force or use the leash/collar to make the dog do something he doesn’t want to do, what is his response?
o Does he just give up and cooperate?
o Does he fight back?
o Pull on the leash?
o Whine? Bark? Growl? Snap? Bite?
o Try to run away?
o Body slam you? Jump up? Grab you or your clothing?
o Lay down? Shut down?

• When the dog is excited, as when going out to the yard or for a walk, what does it take to get his attention?
o Will he sit while you put the leash on?
o How many times do you have to tell him sit?
o Do you have to physically help him, such as body blocking, to keep him from dashing out the door?

• If the dog is on the bed or furniture, can you ask him to get off without having to force him in any way? If not, do you have to repeat the request more than two times? Bribe him with treats or toys? Use a collar and/or leash to move him? Physically remove him? Does he growl or threaten you in any way? Does he shut down?

• When walking on leash, how much time does the dog spend pulling? What equipment is needed to keep control of the dog?

• If the dog sees other dogs or people or animals on the walk, what does he do? What does it take to get and keep his attention in that situation?

• What are the situations where the dog gets really excited and it’s hard to get his attention?
o What really distracts him?
o Do you have to use cookies or toys? Are they
effective? All of the time? Usually? Sometimes? Only under certain conditions?

Investigation
There are endless questions that can be asked. Diet, exercise, housing, feeding practices, schedules, and even activity in the neighborhood can all play a role. This article cannot list all possible avenues to investigate. What you ask – and discover – will depend on what’s presented. For example, when a client tells me that her dog was fine until the neighbor came over and the dog bit him, I’ll be asking a lot about the dog’s social interactions both at home and elsewhere.

What I often find is that this investigation into what “fine” means reveals that the dog wasn’t fine at all. In fact, he was displaying behaviors that a knowledgeable eye recognizes as potentially problematic as the dog matures, though the average dog owner may not see a brewing problem. This is no different from the average driver who ignores a chronically underinflated tire, unaware of what a mechanic knows: i.e., what seems to be a simple tire problem can lead to other mechanical or safety issues.

Identifying Specifics
Sometimes, however, there really is a precipitating event, and the dog was totally fine before that happened. I’m reminded of a young dog who had been housebroken, but suddenly began to refuse to go out in the backyard and would urinate in the home as soon as she had a chance to do so unobserved. The veterinary exam had shown nothing unusual, the diet had not been changed, work schedules were the same, there had been no new additions or losses to the household, etc. Watching the dog as the client and I talked, I noticed that every tiny sound outside the consultation room was registering with the dog. Her ears were moving just about nonstop as she tried to track all the sounds of a busy veterinary clinic. Loud noises made her cringe, though she recovered in a few minutes. I asked about sounds that the dog might be exposed to in the backyard.

At first, the guardian shook her head, “No…” but then paused. It turned out that with the spring weather, she had hung up some big garden chimes. Additionally, a new neighbor had moved in with two small dogs who were incredibly persistent about barking at the backyard fence. This helped explain why the dog was okay going out on the front lawn to urinate, which the owner found infuriating as she had spent a lot of money fencing the backyard. Tracking backwards, the dog really had been fine until chimes and new neighbors became part of the picture.
“What does that look like?” is a great investigative question. Remember that “fine” is a label and an interpretation, not a behavior. Listen carefully, accept no labels, dig in for detailed specifics of behavior. Effective and humane training decisions rest on accurate observations of behavior.

This article was first published in BARKS from the Guild, May 2020, pp.30-31. For more great content on all things animal behavior and training, you can sign up for a lifetime, free of charge, subscription to the digital edition of BARKS from the Guild. If you are already a subscriber, you can view the issue here.

About the Author
Suzanne Clothier (suzanneclothier.com) has been working with animals professionally since 1977. Currently based in St. Johnsville, New York, she is well respected internationally for her holistic Relationship Centered Training™ approach to dogs and the people that love them. Her background includes training, instruction, behavior modification, kennel management, temperament assessment, physical assessment and conditioning, early puppy development, class curriculum development, obedience, agility, Search and Rescue, conformation, breeding and more. Since 1991, she has taught workshops and seminars on a broad range of topics throughout the United States and internationally for a wide variety of groups from training clubs to international conferences in 11 countries. An award-winning author of multiple books and DVDs, her book, Bones Would Rain from the Sky: Deepening Our Relationships With Dogs (2002) has received widespread praise from every corner of the dog world, including twice being included in the Wall Street Journal’s list of Top 5 Dog Books. She has served on the American Humane Association’s Task Force for Humane Training, the AKC Agility Advisory board, and is currently a consultant for Frankie & Andy’s Place, a senior dog sanctuary in Georgia. She has also developed multiple assessment tools such as CARAT™ and RAT™ (Relationship Assessment Tool), as well as puppy and adult dog tests. These tools have been used by guide and service dog organizations, therapy dog groups, AAIA organizations, shelters and rescue groups, and trainers. In her work as a consultant to guide dog schools, her Enriched Puppy Protocol™ served as the structure for the updating of their puppy raising programs. Since 2007, more than 10,000 puppies have been raised in programs built around The Enriched Puppy Protocol™. Meanwhile, with fellow trainer Cindy Knowlton, she developed CCC: Connection, Cooperation & Control™, a puzzle-based program that builds joyful relationships between handlers and dogs. Her newest program, FAT – Functional Assessment Tracking™, helps caretakers assess a dog’s well-being day-to-day as reflected in physiological, cognitive and social aspects.