The Dangers of Stereotyping 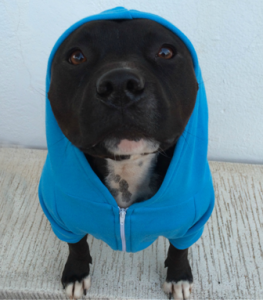 Jambo must be dangerous: He has his hood up!

A couple of years ago I was in England visiting my family just before Christmas. As is usual for this time of year in the UK, the weather wasn’t particularly nice. The rain was pouring down, the wind was blowing and it was icy cold. My mother and I had decided we would go to a nearby shopping centre and spend the day buying presents for family and friends. On leaving the warmth of the car I pulled up the hood on my sweatshirt, thankful for the extra protection it gave me from the freezing cold.  I entered the shopping center with teeth chattering and hands thrust into my pockets. What happened next took me totally by surprise. A security guard quickly approached me and ordered me to take my hood down or leave the shopping centre. I was slightly bewildered but lowered my hood, explained that I was cold and asked what the problem was. The security guard proceeded to tell me that hooligans wore hoods and therefore the shopping centre had a policy of denying access to anyone wearing one. I understand that a hood can obscure someone’s face and make it harder to identify them but on asking if other headwear that hid people’s faces was also forbidden, I was told: “No, just hoods!” I’m not sure if he was implying that I was a hooligan but, nevertheless, it just shows how we can be stereotyped because of our appearance.

This “stereotyping” of people is exactly what happens with certain breeds of dogs. People see a tiny Pomeranian and think they are cute; they see a Border collie and presume they will be well-trained: a Labrador will, of course, be good-natured. However, when many people see a Rottweiler, a German shepherd, a Doberman or a Staffordshire bull terrier they often assume that they will be aggressive, with “pit bull” type dogs faring even worse.

Unfortunately, the stereotyping of these breeds is often exacerbated by the media. Most incidences of dog bites are not reported on the televised news or written about in the newspapers, but you can guarantee that, if one of the aforementioned breeds is involved, it will make the headlines. Even when it is unclear what breed of dog was involved, the word “pit bull” will often make an appearance. 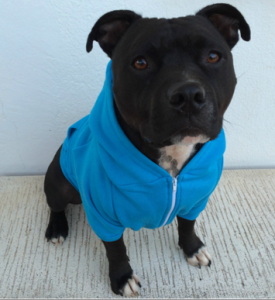 Is Jambo not as “dangerous” now he has taken his hood down?

It’s human nature to form opinions and to make judgments based on what we see but, more often than not, people’s thoughts, fears and prejudices are based on what they see on the television or what they read in the daily paper or on the internet. This exposure to, often very biased, media coverage then influences the popular consensus. For much of the 20th century the American pit bull terrier was one of the most loved breeds in the US. They were even called “America’s Dog.”  How did “America’s Dog” end up being the target of such fear, prejudice, discrimination and even hate?

Just as the media often depicts “hooligans” as wearing “hoodies,” they have also been largely responsible for changing the portrayal of the pit bull from a loving, family dog to a dog that is supposedly so inherently dangerous it should be obliterated from the face of the earth.

There are, of course, other factors that have contributed to the fall from grace of the “bully” breeds. They have often been mistreated, over bred, abused and made to fight in the most unforgivable way. Wouldn’t you think that this should have led to more compassion rather than more hate? A victim is normally considered the innocent party – one who should be cared for and protected. The perpetrator of the crime is, hopefully, the one to be judged and condemned. So why, in the case of pit bull-type dogs, hasn’t this happened? Why have they been judged guilty? Why are they not “presumed innocent”?

Sadly, until the media begin to change their biased reporting against certain breeds, I think we are fighting an uphill battle. What is very encouraging though is the number of people who are championing these breeds and fighting for their rights.

The force-free training community is, I believe, an integral factor in the battle to end discrimination against certain breeds.  I would like to add that there is a complex interaction between genetic and environmental factors which determines how an animal will behave but I believe that educating people about the use of reward-based, scientifically proven training techniques for all breeds of dogs is paramount in irrevocably demonstrating that the way a dog behaves has very little to do with the way he or she looks.