Encounter with a Poisonous Toad: How Positive Cues and Scent Games Saved the Day 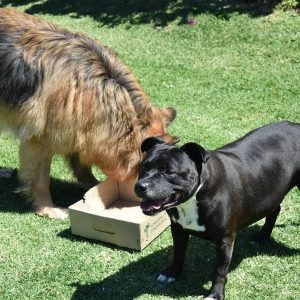 In the early morning hours of a wet April in 2015, I found myself rushing my gorgeous Staffordshire bull terrier Jambo to the emergency vet. As a result of what happened on that stormy night, I shared our experience and the information that my veterinarian subsequently shared with me in a BARKS blog titled How Force-Free Training Helped Save My Dog’s Life!

Here is a quick recap of what occurred:

After a particularly bad thunderstorm had finally dissipated, I decided to take my two dogs out for a bathroom break before we went to bed. Unfortunately, there was a large toad in our path, and I didn’t see it until it was too late. Toads produce a venom through their skin when they’re under attack, or think they are, and this venom poisoning can be fatal to dogs if left untreated (Turner, 2018). Unfortunately, Jambo fleetingly touched the toad and immediately began shaking his head, pawing at his mouth, and flicking his tongue.  He then started spinning one way and the other. This was followed by fear, panic and immediate flight. 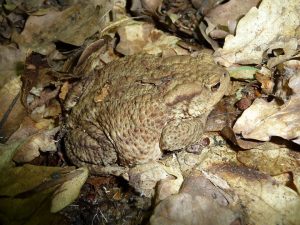 Understanding the seriousness of the situation and the need for quick action, I quickly called him.  His response to the recall cue ‘come’ is extremely reliable under normal circumstances and has even been conditioned so that whether I pronounce the word in my usual happy, high-pitched tone or scream it at the top of my lungs, he comes quickly running to me;  but on that night, under those conditions, he didn’t respond, he kept running. As the Fight-Flight-Freeze response is the body’s automatic, built-in system designed to protect all of us from threat or danger, his response was totally normal. I quickly followed up with his emergency-stop cue which has also been highly reinforced. He stopped; I caught up with him; was able to carry him inside, administer first-aid and drive him quickly to the emergency veterinarian’s clinic.

A massive ‘bank account’ of positive reinforcement and my much-loved dog’s response to his emergency-stop cue may well have saved his life, as toad venom can cause rapid heart failure. I encourage you to read the original post for more information and to learn about both the symptoms of toad poisoning and what you should do if you suspect it may have occurred.

The positive outcome of our latest encounter with one of these toxic critters yet again confirms everything I already know about the power of force-free, rewards based, science-based training.

At this time of year (mid-October) it is still dark when we rise. Because I know that night-time can be a favorite time for toads to make an appearance, especially as we irrigate our yard throughout the early morning hours, the first toilet break is always on leash. With the flashlight on my phone lighting up the route ahead, we made our way into the garden. Jambo usually walks very well on leash and is seldom prone to pulling. We can happily amble or rush along and his pace will match mine and mine his but Jambo suddenly lunged forwards. I quickly pointed the light further ahead and there, about two meters (6 ft) in front of us, was an enormous toad!  I immediately asked Jambo to ‘leave it’.

I taught this cue to mean something very specific, as I believe we should with all cues in order to facilitate learning and understanding. I taught ‘Leave it!’ to mean ‘look at me’. I am then able to ask my companion to either stay, come, move away… whatever it is I would like him/her to do. My instructions will differ depending on the particular circumstances. An unknown dog? Perhaps my next cue will be ‘let’s go’ or maybe it will be a hand-touch, or it may even be a ‘say hi’. It depends on the approaching dog, the dog’s body language, the environment, the situation, my dog’s reaction, the setting events – on leash, off leash, signs of fear, anxiety, stress, avoidance… Whale eye? High tail carriage? Low tail carriage? Growling? Snarling? Lunging? Circling? Freezing? Wriggly? Soft? Relaxed?

I digress, back to our toad. After asking Jambo to ‘leave it’, he quickly looked at me. I marked the behavior with a ‘yes’ (conditioning reinforcer) and while praising heavily said ‘let’s go’ and quickly moved both of us away from the toad and back inside the house. It was soon daylight and time to venture out again. This time in search of the toad. We were quite sure that with daybreak, it would have safely burrowed itself away somewhere and that we wouldn’t be able to find it. Jambo safely inside, my husband and I ventured out. There was no sign of the toad. I then had an idea.

As a qualified Fun Scent Games Instructor and the Assessor of the DogNostics Fun Scent Games Instructor Certification Programs, I often play fun scent games with Jambo. The games have a long and strong history of positive reinforcement. Not only is the ‘game’ itself reinforcing, extrinsic reinforcement in the form of yummy food or the toss of his favorite boomer ball has always been provided.  Inside or out, from searching for food hidden in boxes, to scented swabs on window ledges, car keys placed under wheel arches or mobile phones concealed in trees, Jambo loves to play fun scent games and is usually pretty successful in his response to my ‘find it’ cue.

Off I went inside to put on Jambo’s harness. As I recognized the potential gravity of the task I was about to ask of him and clearly did not want to put him in any danger, I shortened my leash to one meter (3 ft) so that I would be right on his heel. – When playing ‘fun scent games’ it is usual to work the dog off leash or on a longer leash so that they can freely move ahead – I then led him towards the area where we had encountered the toad and gave my cue:  “Find it!” 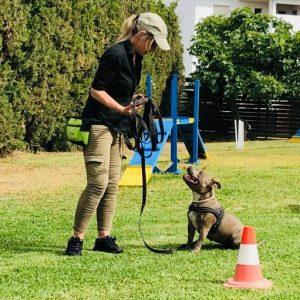 Jambo’s nose immediately when to work. He sniffed the nearby ground for a few seconds and then hurried forwards down the side of the swimming pool. He continued the full nine-metre (30 ft.) length of the pool and then lifted his nose and trotted along the bottom edge.  At the far corner he made a left turn and began to make his way up past the other side of the pool. At this time, I was quite certain that we had lost the toad but then he did a ninety-degree head turn – he was locking on to the source of the odor!  He quickly ran forwards and then stopped and sat down.  I have previously taught him to sit as an indication signal that he has made a ‘find’.  Up ahead, pressed against the wall about a meter (3ft) in front of him, was a big fat toad! I congratulated him on his amazing find and quickly led him away continuously praising him until we arrived at our upper deck where I tossed him his boomer ball, his highest value reinforcer.

I collected a bucket, a broom, a long-handled dustpan and a big crate that we use to put the fruit in that we pick from our trees and returned to where we had left the toad.  My husband had stayed nearby to make sure we didn’t lose track of it.  A little flip of the broom and the toad was on the dustpan from where it was quickly placed in the bucket which was sealed with the upside down crate acting as a lid.  Into the boot of the car it went to be driven to the side of a nearby lake where we were sure it wouldn’t pose a risk to anyone else’s pets.

Yet again, a combination of the relationship I share with Jambo; the management strategies that I employ (always on leash after dark); the positive way in which I have trained him, and the cues and games that we have learned together, resulted in a happy outcome and a safe dog!