A Bit on the Nose 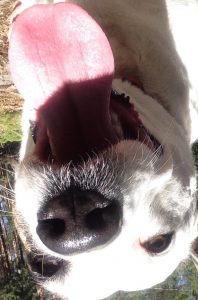 Finding a dog’s nose can be more difficult than one might think. Photo: Susan Nilson

I’ve tried all sorts of things. In my dog free lesson at the beginning of my courses, I take a model dog to class.

On the Nose 101 – find the dog’s nose. I demonstrate what I mean by ‘close’. I then get each participant to give the same demonstration. Almost everybody passes this. A great start!

On the Nose 102 – Keep close to the dog’s nose. I demonstrate how to, keep close to the nose using a ‘sit’ signal. Guardians repeat this. On the whole, fairly successful. Then I demonstrate what the dog would be likely to do if I waved the food a foot or more away from its nose or moved too quickly or too slowly. Laughter. Very good, I think.

On the Nose 102 – (Sit Practicum) The first session with the dogs is usually okay but little reminders about keeping their treat hand close their dog’s nose are always necessary for a few guardians. That’s fine with me – they’ll soon get it.

On the Nose 201 – stand from a sit. This is getting complex so the toy dog comes to class again. Discussion with the guardians about the difference between how our bodies move when we stand from a sit and how a dog’s body moves for the same manoeuvre is usually greeted with sage nods. A demonstration confirms this. Then I demonstrate the technique with each of the real dogs in the class. Of course there is uncertainty in the minds of some guardians and some nervousness. Therefore the first ones I ask are  the ones I think will be most likely to succeed and I am usually right. I set them to do some supervised practice while I move on to the less confident.

So back to On the Nose 103 – Drop or Down. Already some people have begun to move their hand further and further away from their dog’s nose for the sit. Some are doing fancy little wrist flicks that worked for ‘sit from stand’ often enough because the dog had already learned to sit when a treat hove in sight. People like their wrist flicks – and they had started to work for the sit – so they begin to use the same movement or something very similar for the drop, then the stand, then ……!

There might also be the problem with drop for people who move slowly away from an L shaped hand signal to a diagonal line away from the dog’s nose. Sometimes people won’t get up from their chairs when they are cuing a behaviour or try to cue when their dog’s back is to them. So I add some concrete learning materials.

In the dog free lesson I have started giving each guardian a long piece of adhesive tape and asking them to stick it on their slacks/jeans at about the spot they thought their dog’s nose reached.

Most think this is fun and, at the following lesson, they report how close they had come to the real height of the dog’s nose. Some proudly announce that they were really really close. Others laughingly report that they had been nowhere near the real height.

But their accuracy or otherwise in judging their dog’s height usually has no bearing on whether or not they can lure close to their dog’s nose.

Unsurprisingly, the guardians who worked close to the nose in the beginning and used the most consistent, sensible luring motions have the behaviors happening and the prompt dispensed with quickly. The others may well still be struggling and I go to them to demonstrate, and the dog responds.

Perhaps I should find a good (cheap though!) sculptor or modeller who could make me a giant nose to take to class. It could help some people focus on the nose – but I’m afraid others would simply think it was either amusing or ridiculous!