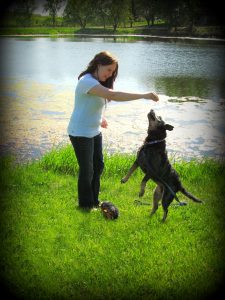 Before entering the world of dog training I had never really had an opinion on shock collars. To me they were just another kind of collar, another way to train a dog. I was unaware of any negative effects. After studying more about positive reinforcement training, however, I began to see another side to them as I realized exactly what they did and how they worked. It made me think about how this type of collar can mentally, physically and emotionally affect a dog.

Then, on September 10, 2013, I got a first-hand look at the side effects of such implements. It was an experience that will forever change me.

We received a call about a dog sitting in Animal Control with her intestines exposed. When we arrived we realized it was not, in fact, her intestines but a massive tumor hanging from her abdomen. She was uncomfortable but still very full of life. The news from the vet was not too optimistic though. She was diagnosed with mammary gland cancer and given four to six weeks to live.

The rescue that had pulled her from Animal Control decided that euthanasia was the best option for her. Instead I told them that I would hospice foster her as I felt it was not her time to go. She was not in any pain and had just been dealt a bad hand ending up with Animal Control. I agreed to take Petunia home and allow her to pass peacefully in a calm environment.

When I got home I pulled out a pretty pink collar from my drawer with Cupcake’s old ID tag and thought, “Well little girl, as you’re staying for a bit you’ll need this.” I thought it would be a breeze, just snap it on and she’s good to go outside.

WRONG! Wow, was I wrong. The collar clicked and she whipped round to take off my arm. I was stunned. What just happened? This sweet little girl had all of a sudden became an attack dog. She barely missed my arm.

She panicked. She paced.

She was not having the collar but I could not get close enough to remove it.

I stopped to wonder what could have caused such a negative reaction. After much ado I finally got the collar off her and she was instantly a different dog again.

She would no longer look at me, however. She panicked when she saw the collar in my hand. She gave avoidance signals. I knew from then on that collars were going to be a difficult thing but, unfortunately, as we lived in town and had leash laws to abide by, she would need to wear one.

I had the next day off work so decided we needed to work on reintroducing the collar into her life. I grabbed my trusty clicker and go-to treats and set out on a mission.

I began by just laying the collar on the floor and each time she looked over and acknowledged it I clicked and treated. We did this several times before I moved the treats closer to the collar. We completed this step until she was able to move around the collar without panicking. I then began to lay the treats on the collar and have her take them from there.

We did several short sessions throughout the day. After a few successful sessions I felt we would start again tomorrow.

The next day we started over again. This time she only gave me avoidance signals. She whale eyed, lip licked and turned away. Sadly, this was a huge improvement from the previous day. She no longer ran from me like I was a terrifying person.

I was able to set the collar down and as soon as she saw the treats we were able to begin our session. This time I included me touching the collar. I would touch it and immediately click and treat. Again this session lasted as long as she remained comfortable and under threshold.

Everything moved at her pace. At the first sign of discomfort we would stop the session and remove the collar from sight. We would then spend time calming. I would lay and massage her. I would talk to her. If we were able to start another session in a relaxed state of mind we would. If she could not we were done for the day.

Over periods of days and sessions I was able to pick the collar up and move it towards Petunia. I worked at a slow pace until I could get the collar near her while it was in my hands. She began to realize that a collar touching her was not a negative experience any more.

Finally and after many sessions I was able to place the collar around her neck without snapping it. Eventually after months and months I was able place it on her neck and snap it into place. I put it on and then immediately took it off.

We began to slowly lengthen the amount of time that she had the collar on. I cried tears of joy the day I was able to say “collar time” and she came over, sat facing away from me and allowed me to place her collar on her.

The look on her face when she saw my “OMG” moment said it all to me. She had a look like, “Mom, I did it! Look at my collar!”

I could not contain my excitement. All my dog training clients and pet parents were bombarded with the news.

Petunia wore her collar successfully for many months. Her fear had finally gone.

I always had the suspicion that Petunia’s fear of her collar came from wearing a shock collar. I know many Australian cattle dogs are trained this way.

My suspicion was pretty well confirmed in one moment. One evening Petunia and I were cuddled up on the couch, incidentally something else that it had taken her quite awhile to do, with our fuzzy blankets. We spent a bit of time snuggled before I needed to get up.

As I was getting up I felt it, a static shock that ran from my body to hers. She screamed. She yelped. She freaked out. She cowered. She ran from me. I could not touch her for hours. My heart broke to know that I had done this to her.

Yes it was unintentional. Of course I would never ever shock her but Petunia did not know this. In her eyes I had betrayed her. I bawled for hours and sat wondering how this would affect our relationship. That night she would allow everyone but me to look at her or touch her.

The next day she finally allowed me to interact with her. A few weeks later she decided to roll in something nasty and I needed to bathe her.

Sadly my fear was correct. I took her collar off with no issue. I went to place it back on afterwards and she barely missed taking out my arm again. Everything we had worked on had gone out the window. I felt heartbroken but prepared myself to start all over again.

Sadly, Petunia passed of cancer before we were successful. I now look at her collar with mixed emotions. In Petunia’s honor I have set out to eliminate as many shock collars as I can and to inform people of the impact they have.

I hope one day to see that shock collars are no longer available for use. My strength in this fight is knowing Petunia will always be by my side.

This article was first published in BARKS from the Guild, July 2015, pp.34-35. For more great content on all things animal behavior and training, you can sign up for a lifetime, free of charge, subscription to the digital edition of BARKS from the Guild.

About the Author
Kayla Sprague is a dog trainer based in Jacksonville, Illinois. After adopting a reactive pit bull she set out to help dogs overcome everyday challenges. She realized how much she loved to help dogs and their owners co-exist successfully, stating that every dog that has came into her life has been a lesson worth learning.