A Crazy Quilt of Laws 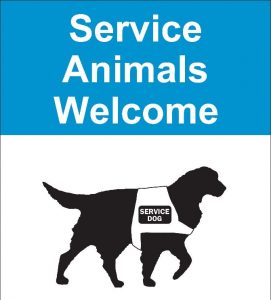 I spent much of the day prepping for two short classes I am teaching on service dog access law. I am hoping to turn these presentations into PPG Webinars, so stay tuned!

I’ve done this before, but most recently, I had an entire semester to teach students about access law and other dog-related laws. We spent seven weeks on the crazy quilt of federal laws that govern public access for people who have service dogs. Paring the vast amount of information down to two one-hour presentations is tough.

I decided that the most important things that the students, future service dog trainers need to know are:

Beyond that, I hope to give this group of students an overview of the applicable laws and plenty of info on where to get more in-depth information.

The biggest problem with the number of laws and variations in how and where they apply is how easy it is for people to break the law — sometimes intentionally, sometimes not.

What do I mean?

The most common area of confusion is over determining what a service dog actually is. The ADA gives people with an ADA-recognized disability the right to take their service dogs into most places that the public is allowed to go. But the ADA defines a service dog as a dog that has been individually trained to perform one or more tasks that directly relate to mitigating a person’s disability. Dogs that merely provide comfort are not considered service dogs. Animals other than dogs (with limited exceptions for miniature horses) are not covered.

Contrast this with the Fair Housing Act, which covers animals other than dogs, allowing them into no-pets housing, for example. Calling them Assistance Animals, any dog that meets the ADA service dog definition is covered — and so is any  animal that “provides emotional support that alleviates one or more identified symptoms or effects of a person’s disability,” commonly referred to as an emotional support animal (ESA). These animals must be allowed into most rental housing, including college dormitories, if the person requesting the accommodation provides documentation of the disability and the need for the animal. But while people are allowed to bring these animals into their homes, they are not allowed to take them along when they go shopping, for example. Outside the home, the animals have the legal status of pets.

Similarly, the Air Carrier Access Act has different recommendations for the way airlines should treat travelers with service dogs and travelers with ESAs. Airlines are allowed to require documentation of the person’s disability and need for the animal, but are strongly discouraged from requesting such documentation for a service dog. However, they can require that travelers with ESAs provide documentation, such as a letter from a medical professional, 48 hours prior to a flight. And, while these travelers may take their ESAs on the plane and have them in the gate area and in ticketing and baggage claim areas, shops and restaurants in the airport — which are covered by ADA, not ACAA — are off-limits.

Confused yet? And we haven’t even gotten to kids taking service dogs to schools, veterans with service dogs at VA facilities, or employees wanting to take service dogs to work with them. Not to mention the overlay of state and local laws that try (illegally) to add restrictions to the federally permitted access or (legally) to expand access.

It’s unlikely that Congress will amend all the necessary laws to create a single standard of access, much less add common-sense requirements, such as a public access test. That’s where PPG comes in.

Trainers who work with people who need service dogs or ESAs can serve as gatekeepers in a sense. Traveling, going to malls and restaurants, being exposed to constant stimulation and attention is stressful for animals, particularly those who have not been prepared properly for this role. Not all dogs can be service dogs; a dog who has high prey drive, is dog-reactive, has any tendency toward aggression or resource guarding — these are all poor candidates for public access. Any handler who cannot keep her dog safe and under control is a poor candidate for a service dog. The trainer sometimes has the difficult task of telling a client that his beloved pet is unsuitable as a service dog, for example.

People are not allowed to take their emotional support animals in public with them (other than airplane travel), but many people confuse the laws, believing that permission to have the animal in no-pets housing means it is a service animal and can go anywhere they go. Other people know that they are breaking the law when they purchase a vest online and head off to the coffee shop with Fido in tow. Trainers are often in a position to (gently) set these individuals straight.

And even if a person has a disability and has a dog trained to assist with that disability (meeting the ADA definition), that person can be asked to remove the dog from a public space if the dog is misbehaving. A dog who is not housebroken, who presents a danger to anyone else, is not under the handler’s control, or is interfering with other people’s ability to participate in a business or service can be excluded, even if it is a legitimate service dog. For example, a person is dining in a restaurant and her service dog wanders away and begs for food from another diner — or the handler feeds the dog from her plate, allows the dog on a chair, or lets the dog lick a spoon. The restaurant staff can ask the person to remove the dog. Another example: You see a shopper in the supermarket with the service dog in the shopping cart. Or licking food items. These are inappropriate behaviors and grounds for asking the person to remove the dog from the store.

As trainers working with service dogs in training or helping people who are training their own service dogs, we can educate people on their responsibilities as service dog handlers. We can’t fix the problems created by a patchwork of vague laws, but we can ensure that any service dogs we work with are calm, confident, safe, and well-behaved in public.