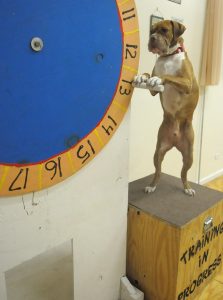 Freddie passed away on October 4, 2014. Not a day goes by that I don’t think of him and all that he meant to me in his brief life. He changed my world significantly since our first meeting at the adoption fair, and without him, I never would have discovered the joy in helping other people and their special canine companions. But rather than be maudlin, I’d like to share an excerpt from an article I wrote for a magazine years ago, highlighting “volunteer activities with your dog.”

While unpacking my belongings after I moved into my condo, I came across an old book titled The Koehler Method of Dog Training. As I starred at the cover with its photos of “trained movie-star” dogs, I was suddenly transported back to an obedience class in 1980. I can still see the poor family dog “learning” the recall while I, and other like-minded students, yanked our dogs toward us like we were reeling in big fish, and for those slow responding dogs, we were instructed to toss choke chains at their rumps as added incentive!

The experience left me with such a bad taste for dog training that it would take another 20-plus years and the adoption of my “wild-child shelter dog” before fate would introduce me to a gifted, positive reinforcement instructor.

For someone who grew up learning compulsion-training methods, this was indeed a very Zen experience, a paradigm shift that was so dramatic, I knew I had to tell the world about this ‘new’ method, and so began my journey to become an instructor and spread the word.

And who better to help with this mission than Freddie, my amazing, sometimes anxiety-producing, but always amusing, French Mastiff mix who at times can respond with lightning speed to any cue I toss at him and at other times, well, I don’t want to admit he’s mine. One such time was when we were invited to a nursing home for  ‘Show & Tell’. I knew his exceptional nature and exemplary behavior would be a big hit with the folks. However I wasn’t counting on having Freddie’s archenemy, Mr. Tennis Ball, showing up! Who would have known that tennis balls are put on the legs of walkers to keep them from slipping? UH OH!!!

Okay, so it was not our finest moment, but I knew there was a place to showcase his ‘talents’ while getting the word out about the benefits of positive reinforcement training. And that’s when the stars lined up, and fate stepped in once again, when the friend of a friend, who knew somebody, who was friends with a guy who I think knew Kevin Bacon, introduced me to an extremely talented marine mammal trainer where positive reinforcement training is a must because as you might guess, there’s no tossing choke-chains at these big ‘fish’, for incentive!

This trainer started his own not-for-profit group, with the sole purpose of raising awareness for shelter dogs and demonstrating how positive reinforcement training can help get and keep dogs adopted. One of the many platforms for his group was a theater production featuring regular dogs and their owners who have trained using positive reinforcement methods. Well since I had a regular dog and I was an owner, I thought we’d be up for the task of trying out for the show, and of course being a trainer, I figured we’d have an edge (or so I thought).

The auditions were held in the theater during the off hours, and at precisely the same time I was demonstrating one of Freddie’s tricks, someone started calling, ‘Hey pup-pup!’ It was the seductive voice of a half eaten hot dog hiding under one of the theater seats! As Freddie took off for a meat n’ greet, I sheepishly said that I’d be happy to put that behavior on cue, as it would be a great gag to have Freddie sprint off the stage and run through the audience looking for ‘contraband!’ Fortunately the judges must have seen the potential in us, as we, along with 7 other dog-teams, were chosen for the show!

So far we have mastered spin in a circle, wave to the audience, pull the rope, hit the Easy Button, and what has become his signature behavior, turn the roulette wheel (like a game show host)! And I’ve even invited Mr. Tennis Ball and his friend, Hot Dog to every practice session!

In this unregulated industry where self-proclaimed gurus are ‘whispering’ the necessity of dominating the dog, it’s now more important than ever to highlight the benefits and fun of positive reinforcement training (using dinner rolls, no alpha rolls here) and I hope that through this unique show, we will get more trainers to volunteer their talents and as well, inspire audiences to hire a gentle professional dog trainer who will teach them how to toss cues, instead of chains!”

Freddie was a character who shaped my career, brought wonderful people into my life, and showed me how to be appreciative of all the good things that have come my way. My memories of him make me laugh and warm my heart… every moment of every day.