A Lesson in Tolerance 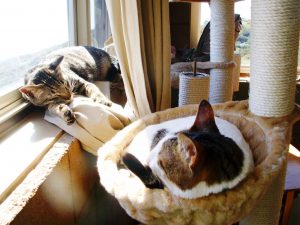 An estimated 40 – 75 percent of all cats that present with behavioral symptoms have some kind of elimination disorder, making it the most commonly reported feline behavior problem of all (Overall, 1997) and the most common reason cats are abandoned or surrendered to shelters.

In this particular case, nine-year-old Ruby had started urinating around the house for no apparent reason. Ruby was an indoor spayed female domestic short-hair who lived in a four-cat household comprising her male sibling and two much younger cats, one male and one female. Nothing major had occurred in terms of environmental changes and she had always been tolerant of the younger cats if not overtly friendly.

These particular owners had adopted Ruby with her brother from a rescue at the age of two years old and had already moved house with them three times without Ruby getting particularly stressed. She was always the intrepid, independent one they told me. She kept herself to herself and nothing really fazed her. They had always followed the rule of thumb and had a litter tray for each cat plus an extra one, and had not experienced any issues like this previously. So they took Ruby to the vet for a check-up, which confirmed she had developed oxalate crystals in her bladder. These had caused urination to be painful, a pain that Ruby had apparently begun to associate with using the litter tray before her owners had realized what was going on. So, she started eliminating elsewhere – on the curtains, sofa, furniture and carpets – to try to avoid this unpleasant experience. At its height, the behavior was occurring several times a day.

As soon as the clinical diagnosis was received, Ruby was placed on a special diet to dissolve the crystals and she started to recover. The discomfort gradually went away and she was given a clean bill of health. However, her elimination habits did not change. It is probable by this stage that Ruby had ‘learned’ using the litter tray was a painful experience to be avoided at all costs. Conversely, given that the pain had disappeared relatively soon after she had embarked on the special diet, her more recent strategy of urinating outside the litter tray did not have quite the same unpleasant association. 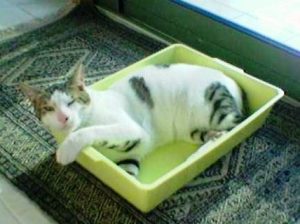 Ruby associated urinating in her litter tray with a painful experience, so started avoiding it. Photo: Susan Nilson

Just to complicate matters, the relationship between the two male cats in the house deteriorated rapidly around this time as the younger male reached social maturity. This lead to some aggressive behavior and even some fighting. Ruby was very anxious about this situation as, if the young male could not find her brother – to whom she was very bonded – he would victimize her instead. So she resorted to a behavior that had brought her relief in the past – urinating around the house. She may also have been trying to assert herself and make herself feel more secure in the multi-cat household by marking objects with her scent. Her owners rarely – if ever – saw her performing the behavior and were unable to pinpoint specific triggers or contexts – aside from Ruby’s primary emotional state, which at the time was one of anxiety. She favored no specific spot, although curtains and furniture were the most commonly sought out. She had also managed to deposit large quantities of urine against the owners’ old CPU, which was on the floor under the desk in their home office, causing it to rust quite badly. The urine had dripped down underneath and soaked into the carpet. It wasn’t pretty. Nevertheless, the owners were endlessly tolerant and dutifully went round cleaning thoroughly whenever they found Ruby’s latest offerings.

The treatment plan involved separating the warring felines at all times they could not be supervised, ensuring they were all able to relax without fear of being attacked or feeling compelled to attack. The aim was to remove stress, anxiety and fear and elevate Ruby’s overall mood state. When the cats were permitted access to each other, it was always at a safe distance and focused on positive events, such as feeding or attention from the owners. Calm behavior was rewarded and any signs of aggressive body language or behavior were interrupted and redirected onto a cat toy before they could make any real progress. Cats can be masters of both overt and covert aggression and the owners were schooled in watching closely for all signs, such as staring, dilated pupils, piloerection, lowered slashing tail and flattened ears, as well as the more vocal growling and hissing. We also added in more play time and exercise to give Ruby some extra highlights to her day to help improve her overall mood state while simultaneously reducing her anxiety levels. We discussed confinement while Ruby could not be supervised but, as the owners were unenthusiastic, we continued to allow her free range.

In addition, we addressed more practical considerations. Curtains were tied up off the floor, sofa corners were covered in transparent plastic, rugs removed, carpets professionally cleaned etc. Unsurprisingly, the owners were desperate to sort out the problem so we took a multi-faceted, holistic approach. As such, litter trays were placed in popular elimination areas (unpleasant but only temporary). Dishes of dry food were placed in areas where a litter tray was not practical. The aim was to restrict access to soft furnishings while providing Ruby with an acceptable alternative in the litter trays in her favored locations, as well as anticipating that she would steer clear of urinating in areas where she was likely to eat. Thorough cleaning of all soiled areas was essential, using a biological detergent to break down the fatty proteins in the urine that a cat would otherwise still be able to smell and be tempted to overmark.

Over a period of a number of months, the frequency of the inappropriate urination gradually started to decrease until it became occasional and then infrequent, instead of several times a day as it had been at its peak. During this time, the owners were gradually able to remove the litter trays and dishes of food scattered around the house and put them back in more appropriate locations. Eventually all the cats were able to be together again without supervision.

Over the next few years, in times of extreme anxiety, Ruby would still occasionally urinate on the curtains, resorting to the behavior she had once learned would bring her relief. The fact that the feeling of relief is chemically addictive should never be under-estimated, and can be a contributing factor in many a behavior problem. Eventually however, after a few years and when the feline dynamics in the house had settled down again (and thanks to her owners’ unwavering patience), Ruby never performed the inappropriate behavior again.

Susan Nilson BA (Hons) DipCABT (UK) PCBC-A is a Reuters-trained journalist who studied feline behavior under the tutelage of Prof. Peter Neville at the Centre of Applied Pet Ethology (COAPE) in the UK and completed her diploma in companion animal behavior and training with COAPE in 2005. Based in Los Angeles, California for the last six years, she saw behavior cases on an ad hoc basis, assisted START Rescue, with temperament assessments and was a volunteer behavior consultant at the Linda Blair Worldheart Foundation, one of the largest pit bull rescues in the US. She recently moved to Finland where she edits PPG’s trade publication, BARKS from the Guild, and is learning the language prior to jumping back into the world of behavior.