A Life Full of Learning 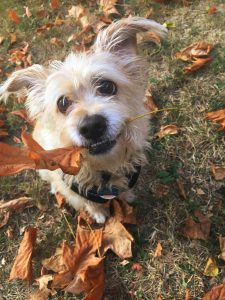 Dustin was scared of many things (for example, the refrigerator, and any sort of extreme emotions on my part, such as being too angry, excited or upset). He was scared any time he made a mess inside my apartment, like urinating or vomiting. I learned that he was happy and content in his crate; liked squishy treats, but not biscuits; and that he was potty-trained, and not destructive. He would play with his toys for hours and he was a little cuddle bug at night on the couch. I also learned that as much as Dustin loved going out for walks, the city streets were very stressful for him. Loose leash walking was a nightmare. He practically walked on his back two legs when we were outside. He flinched whenever he heard a loud noise, and was afraid of men wearing hoodies and children playing. He also struggled with walking at night, barking at almost every moving object. Read more.