It’s a question I’m sure that Beethoven and Mozart asked themselves at some point in their illustrious careers: “Sure, the crowned heads of Europe love my stuff, but how do dogs feel about my music?” Well, as it turns out, dogs are big on classical music. Researchers have studied it. Really. 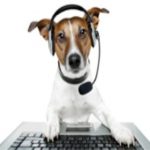 The question came to mind the other day when I read that the Dog TV channel has hired Grammy-winning musician Andrew Dost to write some relaxing tunes for dogs who are stuck at home alone while their owners are away working to pay for Dog TV and kibble. The channel plans to air the music along with soothing scenes of nature in Yosemite National Park to help canine stay-at-homes deal with stress and anxiety. For the owners, there’s the relaxing experience of not coming back to a house torn to shreds by a stressed-out dog.

So, how do you go about writing tunes for a dogs? I know my dogs do like music. The three of them shuffle into the living room three or four times a day for a songfest. Finn, my wolfhound, tosses back his head and belts out a soulful howl. Sully and Bentley fill in the backbeat with yips and yowls. The neighborhood dogs often join in, accompanied by melodic cursing and shouts from their owners. I see by their toothy grins that it relaxes my three dogs quite a bit. Or at least keeps them amused.

But not every dog has canine housemates for sing-along fun, so, there’s a growing industry that uses the science of psychoacoustics to help dogs cope with separation anxiety and loneliness when they’re home alone. Psychoacoustics is the science of finding which sounds have what effects on people. For $12.95 a CD plus shipping, you can see how effective it is with dogs. There are several web sites that sell music for dogs. Since dogs tend to mangle keyboards, you’ll have to be the one deciding which CDs are right for them.

We don’t hear with our ears alone. There’s a brain attached to our sense of hearing, too, and it’s directly affected by different pitches, tones and rhythms. They can excite us, calm us, put us in a contemplative mood or simply make us feel happy. Psychoacoustics is a complex and growing field of human study and some are now applying its findings to music made specifically to benefit canines. In dealing with stressed dogs, the producers simplify the “data” in pieces of classical music, often limiting it to performances on a single instrument, removing much of the musical ornamentation and density, choosing rhythms that ease the mind and slow the heart rate.

One site features music for elderly dogs with the higher frequencies removed from the music to avoid arousing the older dog’s nervous system, which becomes more sensitive with age. You were wondering why your senior hound is suddenly adverse to fireworks? Maybe it’s the high, banshee shrieks ricochetting through the night air? Well, music for older dogs tries to avoid all that.

There are tunes for your car to help Rover settle down instead of panting, drooling or howling pitifully like he usually does when placed inside a moving vehicle. One testimonial said, “This is the first time I’ve heard my dog snore. He curled up in a natural fashion” and conked out. Which is a big improvement over Rover hanging from the ceiling like a fruit bat and screeching while going around the town square.

A common theme among the claims about the high-tech dog arrangements is that they not only calm your dog, they’ll put him in a deeply tranquil state. Some of the music come with warnings that the owner should not operate heavy machinery while listening to the hypnotic rhythms. I think it’s safe to say your dog shouldn’t either.

But a study by Lori Kogan of Colorado State University questions whether the psychoacoustical music will actually cause Fido to tip over into a deep slumber or whether he’ll just keep on biting his nails until you’re home. For four months, Kogan played three genres of music for 45 minutes to 117 dogs of various breeds and recorded what they were doing every five minutes.  She tested the dogs on classical music, music adjusted to dog’s ears using the psychoacoustic approach and heavy metal music. She said the dogs seemed to ignore the psychoacoustic arrangements altogether. Meanwhile, the strains of Tchaikovsky and Debussy got the dogs’ attention and had a calming, restful effect. And, heavy metal music, not surprisingly, made the dogs jitter.

Animal researchers say if you really want to hold an animal’s attention, play it recordings of its own kind, because those are the pitches and rhythms they’re most naturally attuned to and affected by. For example, Tamarin monkeys use vocalizations three octaves higher than human speech. Songs recorded in that range affects the monkeys, but grate on us as much as Alvin and the Chipmunks. But the Tamarins calmed down when happy monkey sounds were played to slower tempo in their natural octave range.

So, if you want something your dog will certainly listen to, you might try a recording of dogs barking along to “Jingle Bells.” But it’s not likely to have a calming effect on either you or Rover.

If we think of it, we usually leave the kind of music we personally prefer playing in the background when we leave our dogs home. Given the findings in the emerging field of music for dogs, maybe it’s time to be more selective. Future studies will likely refine what works and what doesn’t, but for now we know that the slow strains of classical music have a reliably soothing effect on canines. But for relaxation, I think I’d skip the 1812 Overture.