Advocacy opportunities sometimes pop up unexpectedly, as happened to me in November 2016.

I contribute a column to a local weekly newspaper and while perusing an issue I found an interview with the public works director of a nearby village. He casually mentioned spraying herbicide in the dog park to control thistles.

The director responded to my email inquiry and identified a specific 2,4-D product in use, inviting me to attend a meeting of the Park Board in two weeks. Knowing nothing about 2,4-D I did a little research and was amazed it was one of two main components of Agent Orange. 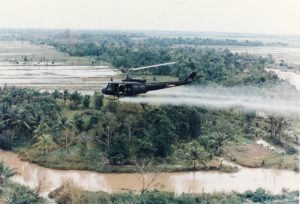 That defoliant was used during the Vietnam war and is responsible for generations of Vietnamese suffering birth defects and the death of many American soldiers who were contaminated. Included among them is my friend, Larry, who was one of the first veterans granted recognition of disease caused by Agent Orange.

I wondered whether it was safe to use 2,4-D in municipal parks and found there were over 3,000 sources in scientific literature on the chemical, spanning seven decades.
My goal was to inform the Park Board of risks using a 2,4-D product and what alternatives were available. I printed fact sheets for each board member and attended the meeting.

Gladly I heard several sincere expressions of concern about public safety and welfare in the parks, and was equally alarmed to hear the public works director say 2,4-D was to be used in other parks where children played. A sandbox with thistles was one specific target.

Based on what I read, the chemical has been identified as an endocrine disruptor affecting human reproductive systems, is linked to cancers and can easily contaminate water. Should it be sprayed in a sandbox where children play or on grass where dogs and families recreate? 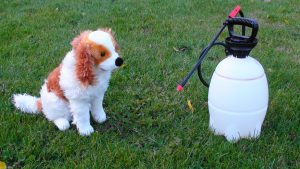 I read the product label of the particular herbicide used by the village and it was identified by the manufacturer as a corrosive that may cause irreversible eye damage and may be fatal if swallowed. The manufacture warned “Do not apply directly to water or to areas where surface water is present”.

The dog park is on moist peat about 40 feet from a creek and a bit further away from a water treatment plant. The soil retains water and is easily flooded. One complaint about the park is that foot traffic turns the surface to mud. Summer winds usually blow from the south and the water features are to the north, raising the risk of contamination.

I emailed the manufacturer asking how soon after spraying was it “safe” for children and pets to play on the turf. The response was “As soon as the surface is dry”.

Hmmm? If I sprayed my lawn on a hot sunny day and it dried an hour later I could send my kids and dogs onto the lawn…knowing children engage in hand-to-mouth behavior and dogs eat grass? No thank you.

Independent data declared “2,4-D…are highly volatile and will drift by wind to other fields. Production and use of 2,4-D and other chlorinated pesticides has been associated with considerable environmental contaminations with dioxins and furans.”

“Tetrachloridibenzop-dioxin is known to be a human carcinogen based on sufficient evidence of carcinogenicity from studies in humans, both epidemiological and on the mechanism of carcinogenesis. It is also a potent endocrine disruptor with significant effects on reproduction.”

“…under sunlight traces of dioxin contained in pesticide formulation may multiply.” (1)

Another source declared “There’s a growing body of scientific evidence that the chemical poses a danger to both human health and the environment.”

“Researchers have observed apparent links between exposure to 2,4-D and non-Hodgkin’s lymphoma (a blood cancer) and sarcoma (a soft tissue cancer.)”

“…in 2015, the International Agency for Research on Cancer declared 2,4-D a possible human carcinogen, based on evidence that it damages human cells and, in a number of studies, caused cancer in laboratory animals.”

“More conclusive is the proof that 2,4-D falls into a class of compounds called endocrine-disrupting chemicals, compounds that mimic or inhibit the body’s hormones.”

“Also problematic, 2,4-D sticks around in the environment. Depending on the formulation, it can drift through the air from fields where it is sprayed or be tracked inside homes by pets or children. By the EPA’s own measure, 2,4-D has already been detected in groundwater and surface water, as well as in drinking water.”

“It can also poison small mammals, including dogs who can ingest it after eating grass treated with 2,4-D.” (2)

I ended my presentation with information about less-toxic alternatives to thistle control such as picking, mowing, vinegar-based herbicides, insect and animal control.

The Park Board suspended herbicide spraying in all village parks while they conduct additional research into less toxic methods of weed control. The dog park was chosen as a pilot project.

The public works director agreed to accept direction from the Board but stated “People don’t want weeds in parks” to which a member replied “They don’t want cancer either. We can find safer alternatives.”

Following that meeting a board member who stopped using herbicides 15 years ago informed me “We had no idea this chemical was being used.” She lives in the country and lets her goats eat the weeds in her horse paddock.

We may inform and educate others in ways that we never expected, keeping people and their pets safe.  Advocacy rocks!

Daniel H. Antolec is the owner of Happy Buddha Dog Training in Wisconsin (USA) and is a Project Trade participant, and humble chair of the PPG Advocacy Committee. His adopted Labradors, Buddha and Gandhi, are Pet Partners therapy dogs.