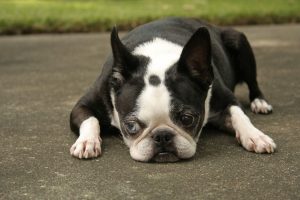 As any reputable behavior consultant will tell you, all animals presenting with a behavior problem should first be checked by a vet.

As behavior consultants, we work on veterinary referral for a number of reasons. Firstly, we want to be sure that the problem is not a symptom of an underlying medical condition and, secondly, we may need to collaborate with the veterinary professionals if medication or supplements are needed to support the behavioral therapy.

Sometimes we might receive a referral where the examining veterinarian has decided that a medical issue has caused the behavior problem, but it is always worth going through our normal case taking and diagnostic processes to check out these assumptions.

In the case of early or late-onset deafness where the presenting dog was not born deaf, but has become deaf due to ear infections, trauma or deterioration in old age, we may find that a change in behavior is attributed to the deafness. In a previous article I explored some of the common myths around deaf dogs, including debunking the notion that deaf dogs are more likely to be aggressive and reactive just because they are deaf (see It’s All in the Management, BARKS from the Guild, May 2015, p. 35).

In fact, an interesting paper by Farmer-Dougan, Quick, Harper et al. (2014) reported that, based on a sample of 461 dog-owners, hearing- or vision-impaired dogs were less likely to show aggression among other undesirable behaviors.

With this in mind, I am going to present a case study of a relatively complicated little dog who happens to have lost most of her hearing and was referred for aggression problems. A colleague asked me to review the case notes and provide deaf dog-specific input. The summary below is necessarily abbreviated to focus on the most relevant details.

(All names and any identifying details have been altered)

Tess lives in a home with two owners, and another dog of the same breed (male, slightly younger, some tension between the two dogs). The owners contacted a behavior consultant for help at the suggestion of their vet as it was difficult to handle or touch Tess without being snapped at or nipped.

It transpired that Tess would also bark at any dogs she saw when out on walks and had attacked three dogs when off-leash.

The vet suggested that since Tess had now lost most of her hearing following repeated ear infections and mites, that the deafness was the reason for the aggression. Their reasoning was that since Tess was likely to be surprised by both her owners and other dogs, she was becoming defensively aggressive.

Additional information from the behavior consultant revealed that Tess was reluctant to have her harness and leash put on (resulting in nipping and snapping) and once out on a walk would refuse to take treats, becoming fixated on the other dogs and barking.

The owners reported that Tess was okay to handle and social with other dogs prior to the onset of the deafness.

The behavior consultant had started the owners on a straightforward plan of education in canine body language to help them respect Tess’s personal space, and using food for desensitization and counterconditioning (to both handling and harness fitting).

The owners were encouraged to walk Tess at quieter times and generally avoid other dogs for the moment. Good progress had been made by the second visit and Tess was noticeably more affectionate with the owners. So far so good.

However, little Tess was described as being “very distracted” when going out for street walks, staring at the door and then either sniffing or pulling when outside. Tess refused food at all times out on walks.

The working prognosis thus far was that this was due to her deafness, Tess was now hypervigilant and worried when out on walks. Since she was unwilling to take treats at all when outside the home (even on quiet walks) the behavior consultant was starting to feel rather stuck.

Time to Stop and Reconsider

As a deaf dog specialist trainer, the behavior consultant asked for my input at this stage.

What would I do differently? Well, for me when a dog appears to be finding it so difficult to cope outdoors, my first port of call would be to encourage the owners to only drive to very quiet areas for Tess’s exercise and avoid all street walks. Keeping a daily diary to monitor encounters with other dogs should also help to get a clearer picture of the stressors.

Working at home on handling, harness fitting and making sure the owners had some simple hand signals to use for communication would be the first priority. I would then want to explore Tess’s ability to eat different kinds of appealing food in different places – to see whether she really could not eat at all outside the home.

I would want to study a video of her body language outside the home to try and get a better sense of the underlying emotion.

I would also want to make sure the owners understood about uncued or zen attention, and that Tess was really comfortable playing this kind of focus game with them in the house and in the garden. We would want to then try and extend this to a very safe outdoor place based on where she seemed able to take some treats. And so it would hopefully build into a successful intervention.

(Note: For reasons of space and focus I have not outlined my entire process here, and would also like to acknowledge that as individuals, each behavior consultant has his/her preferred approach.)

I was puzzled by the assumption that the problem behaviors (snapping/nipping owners, barking and attacking other dogs, nervousness when outside the home) were all caused by Tess losing her hearing. Perhaps I am naturally suspicious, but as a trainer and behavior consultant I have learned to keep an open mind when hearing the words “she was fine before xyz.”

Sometimes this is true, but as I read through the notes I could not help wondering if the little dog might have been less comfortable in all these situations even before losing her hearing.

Repeated mite infestations and ear infections are painful, and it seems likely the infections were severe since they led to a total loss of hearing. The treatments would have been uncomfortable and required repeated administration and restraint by the owners.

We know that pain changes behavior in general, and it seemed to me that it was very likely Tess would start to associate any hand movements near her head with future discomfort and pain. So we have an alternative explanation for the snapping and nipping when handled, and when the harness was pushed over her head.

What if Tess had been slightly less pro-social around other dogs than her owners realized (and without historical video footage to go back to we are reliant on owner-memory and observation skills)? Then the addition of ear pain into somewhat stressful encounters with other dogs could have been enough to change her reactions and prompt a more pro-actively defensive response.

Certainly deafness could result in some increased startle responses to a suddenly appearing dog, but it seems more likely that pain had influenced the emotional association.

It was unclear from the notes to what extent Tess’s very distracted behavior outside on walks was a new development following the hearing loss, so we are left wondering how much of this might also have been present beforehand.

Coming to the case with a slightly different set of preconceptions meant that I saw the deafness as a much smaller part of the jigsaw puzzle for Tess. Occam’s razor* reminds us that the simplest explanation is often the best, and we should avoid over- complicating things.

In this case, it seems more likely that repeated painful experiences created an aversion to being handled, and this may also have affected Tess’s interactions with other dogs. Noting this as a potentially significant factor would mean that my approach would also now include rechecking the ears for any discomfort, and introducing sensitive bodywork such as TTouch™ around those areas.

*Occam’s (or Ockham’s) razor is a principle attributed to the 14th century logician and Franciscan friar William of Ockham. The principle states that: “Entities should not be multiplied unnecessarily.”

About the Author
Morag Heirs PhD MSc MA(SocSci)(Hons) PGCAP human and canine remedial massage therapist, is a companion animal behavior counselor who runs Well Connected Canine, www.wellconnectedcanine.co.uk, in York, UK. She works with deaf and blind dogs professionally, provides training and support for the Deaf Dog Network and is the behaviorist for Sheffield Animal Centre (RSPCA) and York & District RSPCA branches in the UK.