An Allegory: What Happens if a Dog is Punished for Having a Phobia? 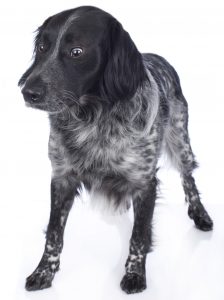 This dog is experiencing a fearful response to a stimulus. Canine body language signals indicating fear can include a lowered body, tail down or tucked, ears back, lip flicking, freezing, dilated pupils, panting, pacing, avoiding eye contact, commissures pulled back, whale eye and yawning, among others. © Can Stock Photo/Absolutimages

Johnny is five years old and he is a great kid. He is loving, does very well in school and absolutely adores his mom.

One day he was playing in the park and was badly bitten by a spider. He was never afraid of them before until he got bitten. He became so fearful that every time he saw one he would cry, tremble and have a panic attack. He would sweat and almost faint. Almost all physiological signs of fear were present at the mere sight of a spider, no matter how far away.
Oh it was truly embarrassing… He did this in front of everyone. All the other moms had kids who were fine with spiders. Johnny was the only kid making a scene. This needed to stop.
Johnny’s mom called a child ‘expert’ who had experience with such situations. He told Johnny’s mom she was being too soft on her kid; she needed to show him that she was the boss so that he would not try to dominate her by having a panic attack – on purpose – when he saw a spider. He was clearly trying to be the leader of the family and take charge of the household by sweating and almost fainting. How dare he?! Involuntary crying, involuntary sweating and involuntary trembling were not acceptable. It was obvious that he was doing these involuntary (aka reflex) behaviors on purpose. And the expert was going to make sure the mom had complete control over the involuntary behaviors. 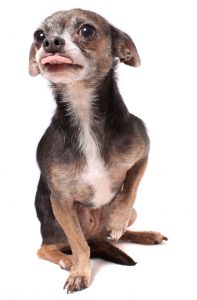 If an owner or trainer uses aversive techniques as a “quick fix” for fearful behavior, they may get a dog that looks as if he has ceased exhibiting fear and “gotten over” his phobia, but in reality he is simply displaying learned helplessness – the fear has not dissipated by any means. © Can Stock Photo/gvictoria

So the expert showed mom how to get Johnny to stop reacting to spiders, and stop embarrassing her like that: every time her five year old son cried in fear when he saw something similar to what bit him, she should yell ‘NO’ at her son, stare at him, grab him by his shirt and hit him really hard. After all, he was definitely trying to take charge of her and the situation by having a panic attack and she needed to take back control.

After a short time, Johnny had been punished so many times when he saw a spider that he would not cry any more. He would still tremble and sweat and almost faint – but that didn’t matter because these feelings could not be heard, meaning his reaction wasn’t embarrassing. And the expert stated that Johnny was cured: “You see?” the expert cried, very proud of another great achievement. “Now he’s fine.”
As he was speaking, Johnny was hiding in a corner, looking at a spider, still petrified. But now he’s more scared of his mom. So is Johnny ‘fine’?
Please bear this story in mind before using aversive training techniques and tools on your dog!
For more on fearful dogs, see Navigating the Storm, BARKS from the Guild, May 2015, pp.18-23.
About the Author
Sandra Machado CPDT-KA VSPDT FFCT is a force-free dog trainer and owner of Learned Behaviors in southern Florida. She is an advocate for pit bulls, against the use aversive techniques and tools, and a devout Fear Free advocate in veterinary settings. Around 8 years ago, she created the Box of Shame/Box of Change, which started with trading an aversive training tool for a free training class and this expanded to become an educational tool during lectures/presentations at schools, rescues, and vet offices, and has been duplicated by fellow trainers and students aspiring to be trainers. Being guardian of a dog reactive ridgeback pit mix, more prey driven than food motivated, helps Sandra relate to owners with challenging dogs. Her training methods rely on a combination of science, creativity, understanding the dogs’ needs, as well as their owners’ capabilities. Sandra is a member/presenter of Doggone Safe and has a passion for working with children, helping interpret the communication between children and dogs, working closely to improve their relationships and preventing bites. However, her real passion lies in dogs who have a real need to be understood, i.e. fearful and anxious dogs, dogs with bite history and labeled as aggressive, dogs that fit in what is known as the “bully breeds” category and dogs that do not fit at all.
Tweet