Appearances Can Be Deceiving

Adoption is a popular option among many families who wish to bring a dog into their lives. Sometimes, their goal may be to adopt a specific breed. Science Daily defines “A dog breed is a group of dogs that have very similar or nearly identical characteristics of appearance or behavior or, usually, both, primarily because they come from a select set of ancestors who had the same characteristics.” Many of us have our favorites and mine happens to be Labradors. Of the five Labs I have lived with the last four were adopted. My first was a puppy. I knew Samantha’s mother, and grandparents. She came with a breed certificate and was identified with certainty.  Not so with my other four dogs. Charlie, Jake, Buddha and Gandhi look like Labradors and that is good enough for me.

But what about other families? How do they know their dog of choice is the breed they are seeking?  Appearances can be deceiving, and unfortunately, so may be those who label individual dogs.

In 2014 researchers compared breed identification processes used by shelter staff in the United States and United Kingdom. As reported by Science Daily: “Recent research asserts that shelter workers operating in areas restricted by breed-specific legislation (BSL) are more likely to consciously mislabel a dog’s breed if they felt it were to increase the dog’s chances of being adopted and/or avoid being euthanized.”

Recently, an acquaintance chose to adopt from a local dog rescue and he experienced intentional mislabeling. He wanted to give an older, calm Labrador a home on his 50 acre country homestead and take him along to his shop each day.  His adoption decision was based on an online posting, without a photograph or an opportunity to see the dog in person.  What he got was a young, energetic dog who more like a pit bull and nothing like a Labrador.

Several dog rescues which I have some professional knowledge of tend to label mixed breed dogs as a “Lab-mix” to enhance the dog’s heritage.  Labradors have been the most popular breed in the United States for several decades. Misidentification also occurs through honest mistakes, as researchers at the University of Florida found in 2016. That study focused on how dogs are identified as pit bulls.

“The research team evaluated breed assessments of 120 dogs made by 16 shelter staff members, including four veterinarians, at four shelters. These staff members all had at least three years of experience working in a shelter environment. The researchers then took blood samples from the dogs, developed DNA profiles for each animal and compared the DNA findings against the staff’s initial assessments,” according to Science Daily.

For the purpose of the study “pit bull” was defined as dogs having American Staffordshire terrier, Staffordshire bull terrier or American pit bull terrier DNA. Researchers found considerable disagreement between shelter staff regarding identification of individual dogs, and inaccuracy when compared with DNA tests.

Dr. Julie Levy concluded “reliable inclusion or exclusion of dogs as ‘pit bulls’ is not possible, even by experts.” Olson, et al. (2015). Science Daily reported research at the University of Arizona in 2018 found similar problems with shelter identification of breeds.

Researchers collected DNA from over 900 shelter dogs using Wisdom Panel Canine DNA Tests from Mars Veterinary. “When the researchers looked at whether either the assigned primary or secondary breed matched the information from the genetic profile of a dog, they found the shelter staff accuracy was 67%. The accuracy fell to 10% when staff identified more than one breed.” 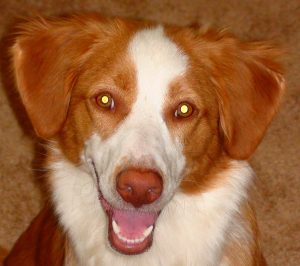 “What breed am I?” Photo: Daniel H. Antolec

A client of mine recently adopted a dog through online search for an Australian Shepherd. A rescue presented her with a dog that appeared more like a Border Collie, and the dog was labeled an Aussie/Collie mix.

Out of curiosity she bought a DNA test and the results came back stating her dog, Minton, was 50% “sporting dog” with equal parts English Setter/German Shepherd/White Swiss Shepherd.

She is very happy with her multi-breed dog, who is smart, healthy, social and easy to train.

My conclusion is that visual identification of dog breeds is largely guesswork. Some shelters have stopped giving dogs breed labels altogether.  Rather than relying upon labeling, I suggest those who want to adopt rely upon the behavior and personality of the dog they see before them.

For those who prefer a purebred dog I suggest seeking a reliable professional breeder who selects for health and temperament. Let’s love the dogs we live with and not fret over breed labels.

On 9-14-18 Minton’s guardian sent me the following comments, with permission to post them.

I was more than happy to share some of my journey with Min.  I have learned volumes of information about dogs in the short 5 months I’ve had Min.  Like I told you, I don’t know if I would have adopted her if I’d had her DNA information ahead of time because I was looking for Aussie traits.  And who knows.  Maybe she does have Aussie in her with the 50% unknown, and DNA tests giving you the “closest” breeds.  What I do know, is that she’s sweet, gentle with the kids, smart, happy, sometimes timid, and a great match of a dog for me.

I’ve already told many of my friends and family about the information you presented in your article, and what Min’s DNA tests results were.  They’re all flabbergasted that Border Collie didn’t show up.  But they too are now seeing the traits Min presents as Min.  Not Min the English Setter.  Or Min the German Shepherd.  Or Min the Sporting Dog breed.  Or Min the possible Border Collie.  Just simply Min.  Min brings me joy every day, which is truly the most important thing in the end.

I don’t know if you believe in fate, or the energies that surround us, etc.  I didn’t so much until I went through the process of my mother passing a couple years ago.  I believe Min and I were meant to find each other.  She was returned to the Clark County Humane Society by her first adopters after just a couple days.  The chances that I would see her the day she popped back up on the adoption site, get my application in before midnight that day, have the director of the Clark County Humane Society contact me the very next day and then hold the dog for almost a week until I could make the over 2 hour trip out to the Humane Society on a weekend day…  Whatever brought us together, fate, happenstance, good luck- I’m grateful Min and I found each other, and I’m truly enjoying learning more about her and dogs in general.  You were pretty much the catalyst for that learning curve Dan.  Perhaps you were part of the fate as well. ☺ Going to Sit Means Sit first, then finding the right match for me with Happy Buddha.  You’re a great teacher for both me and Min.  I know I’m getting a strong base of training and information that I can work off of in my and Min’s future adventures.  Be it rally, a dog I can take into nursing homes and hospice’s, or my initial hope of helping kids (including my grandson) with autism.

I’ll be passing your article along to my circle of people.  And looking forward to more.