Are We Dogs’ Best Friends?

My blog is called The Thinking Dog, so it doesn’t take a canine Einstein to figure out that I take dogs’ thinking ability seriously. But what does it mean to talk about thinking dogs? How do dogs think? What do they think about?

While human thinking tends to occur primarily in words, and maybe images, what about dogs? While most dogs learn to understand many words, it’s unlikely that they think in words. Their thinking and memories are more likely to be tied to scent, which is their dominant sense, and images.

Hoping to understand how thinking in smells might work and even to figure out what dogs think about, neuroscientist Gregory Berns trained Callie, his own dog, to sit very still in an MRI machine so he could watch her brain response to different stimuli. Berns studies the caudate nucleus, a part of the brain that shows a lot of activity when humans experience pleasure, satisfaction, or anticipation. Turning his research to dogs’ brains was a complicated project, described in detail in his wonderful book, How Dogs Love Us.

Since training Callie to lie still in an MRI machine, Berns and his team have tested a variety of hypotheses, each bringing us a little closer to understanding how and what dogs think. His research suggests that relationships with key humans are more important to dogs than relationships with other dogs. They have mapped dogs’ reactions to the scent of a human from their own family and the scent of a different, unfamiliar, person. The team also mapped the dogs’ responses to a familiar and an unfamiliar dog.

The first test the team performed measured the dogs’ response to cues indicating a desirable reward (small pieces of a hot dog) and cues indicating less-desirable reward (peas). The dogs actually were almost as happy to get peas as hot dogs, which might contain an important lesson for us trainers. They decided to try hot dogs vs. no reward, and got responses with a bigger differences. Dogs definitely got more excited about hot-dog rewards than about no reward.

These tests showed that dogs brain responses look very much like human brain responses to pleasurable stimuli. Dogs scenting their own humans showed similar responses to humans viewing photos of their loved ones, for example. Dogs anticipating a tasty reward showed more pleasure than dogs who knew no food was coming.

A 2014 paper on these studies, Scent of the Familiar, (published with a Creative Commons license granting open access) suggests that dogs associate greater pleasure with familiar humans than with other humans or any dogs, familiar or not. The olfactory centers in the dogs’ brains reacted to all of the scents, but the response in the caudate indicated a much stronger positive response to the familiar human’s scent than to the familiar dog’s or the unfamiliar scents. The familiar human whose scent was tested was not present in the lab where the test took place. 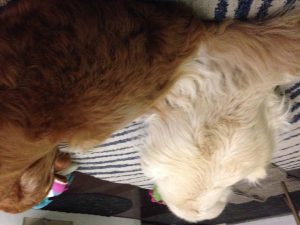 Turning their backs on their best friend?

The researchers say that this indicates a stronger association of reward with humans than with dogs. “Whether this is based on food, play, innate genetic predisposition, or something else, remains an area for future investigation,” the researchers conclude.

While we probably don’t need an MRI scan to figure out which treats are our dogs’ favorites, it’s nice to have some confirmation that they care about us and our relationships with them.