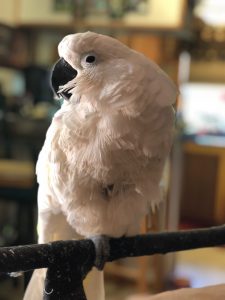 …the mutilating behavior was getting worse. The keepers admitted they couldn’t give their attention to creating the foraging toys I had advised, and told me Abbey was now taking his food and placing it into the hole he had created in his chest. I understood the keepers’ inability to dedicate the time to the toys. Unfortunately, I also noticed a decrease in the ability to divert Abbey from his chest. The behavior had increased dramatically. I got him out of his cage, and even when standing on my arm, he was more focused on his chest than on the attention I was giving him. This increase in attention he was giving to his chest was the behavior I was most concerned with preventing. In this video, Baseline behavior of Abbey, the mutilating cockatoo, you will see Abbey’s tongue clicking, which occurs in correlation with nesting behaviors. You will also see him trying to maneuver my hand to sexually self-stimulate. When not allowed to do either, he quickly reverts back to his chest. Read more.