Dog Speak – The Language of Barking 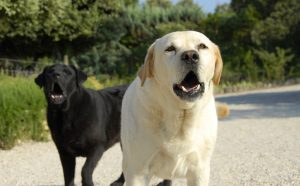 Barking communication has a very clear progression and purpose. It starts abruptly between two and four weeks of age, with most puppies showing a response as if they are startled by their first bark. Initially, barking occurs in a play-soliciting context and is not associated with serious aggression until after eight weeks of age, when puppies will respond to their dam’s growl…Excessive barking is one of the top five reported behavior problems, comprising between 6 – 35 percent of all complaints to canine behavior consultants. Over-barking can cause over-excitement, which can cause high level stress and other behavior issues (Campbell, 1973; 1986)…Understand that excessive barking can cause both physical and mental stress. It is not in the best interest of the dog, in most cases. Keeping barking manageable would be a better option. Read more.