Friends, Foes or Something in Between? 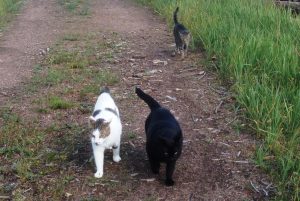 Unlike free-roaming cats who self-select their social group, owned cats living in multicat households don’t—owners do the choosing instead. And when people add cats to a household, they frequently overlook the social differences of the individuals involved, both the resident cats and the new additions. One survey of cat owners revealed that in more than half of multicat households, the cats were simply put together instead of being slowly introduced, and that in half of those households, cats fought with one another (Levine, Perry, Scarlett & Houpt, 2005). It is not surprising, then, that a large proportion of pet cats suffer from chronic stress as a result of contentious relationships with other cats and having no control over their social living arrangement (Bradshaw, 2016). Read article