How Cats Are Made: Nature, Nurture, and the Now 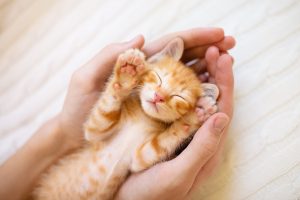 Handling kittens during the sensitive period of 2-7 weeks of age has lasting effects on their future friendliness, resulting in cats that bond quite readily to other people © Can Stock Photo / famveldman

It is not uncommon for adopters to base their decision primarily on the cat’s outward appearance and be less interested, or not interested at all, in the cat’s socialization history, life experiences, and behavior.

In Karsh’s study on placing adult cats, she found that “appearance of the cat, particularly the cat’s color, was usually the most important factor” to the person acquiring a cat (Karsh & Turner, 1988). The lack of interest in the behavioral history of cats could also be the result of the assumption (and the expectation) that all cats behave similarly. In other words, “a cat is a cat.”