How to Manage Dogs with a High Prey Drive

This article examines what prey drive means, identifying motivations, and adapting the Predatory Motor Sequence to ensure dogs still get the opportunity to perform innate behaviors 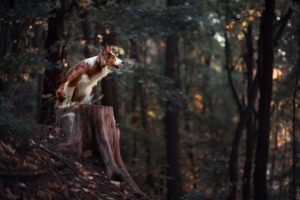 Prey drive is one of those areas of dog behavior that can generate a lot of discussion. It is also one of those things that can cause problems for dog owners. Yet the subject remains somewhat mysterious, with little data available that could help companion dogs and the people who care for them.

I got into this fascinating subject when I adopted a collie cross puppy back in 2007. I named him Cuillin (pronounced “Coo-Lin”) after famous mountains on the island of Skye in Scotland, because he seemed to have a wildness about him.

By then, I’d managed to train my deer chasing and rabbit killing bullmastiff to be calm around those animals to the point where I didn’t need to worry about him chasing or killing any longer.

So I felt pretty good about my abilities and didn’t expect any problems from Cuillin. Wow – did I get that wrong!

My little puppy grew up into an independent dog with a huge prey drive. Walking him off leash was hard because he would follow wildlife scent a long way from me and sometimes would get lost.

I gave up my plans to compete in heelwork to music with him and dedicated myself to learning what I needed to so that he could enjoy running freely in the forests close to my home.

What Is Prey Drive?

At the beginning of that journey, I found confusion, a lack of clear information and few sources of support. I’m now studying for an MSc in applied animal behavior and training and have made prey drive in dogs a focus for my studies.

Doing that has helped me understand why it was so hard to find knowledge and support; when it comes to companion dogs, there just isn’t much useful information available.

One of the issues that I see popping up again and again in discussions is a real lack of consensus about what prey drive is. I’d argue that it is a wider concept than is commonly thought.

The concept of drive is familiar to most people who’ve spent time learning about dogs. Drive describes an internal state – the strength of the dog’s desire to do something.

A dog who will throw themselves through brambles, ignoring pain and injury as they pursue a rabbit would be described as having a high prey drive.

Whereas a dog who withdraws their nose at the first scratch of a thorn and sticks to the path would not.

From an animal behavior point of view, drive is a tricky concept because internal states are impossible to see and therefore, hard to measure. I’d argue also that talking about prey drive doesn’t allow for precise enough discussions. I like to use the Predatory Motor Sequence (PMS) because it allows inclusion of observable behavior and a greater level of detail.

The PMS describes a series of separate behaviors, each of which a dog may feel a desire to perform. Most of the literature I’ve read in animal behavior journals, books, social media posts and blogs lists the PMS as follows:

Domestic dogs, however, are unlike any other predator on the planet. For somewhere between 3,000 and 7,000 years, dogs have been selectively bred for a variety of traits, often to help people to hunt or manage livestock.

Dogs are expected to help through performing different parts of the PMS.

Border collies will use eye and stalk to move sheep.

Many terrier breeds were bred to orient and then kill-bite all the unwanted animals in a small area.

These days, greyhounds are mostly bred to chase a mechanical lure around a track.

Some of the tasks that dogs are bred for require behavior toward prey that is not listed in the standard PMS. I would suggest that for domestic dogs, a more appropriate PMS would look like this:

Hunt is what breeds like spaniels, setters, pointers and the Hunt, Point and Retrieve (HPR) dogs have been created to do. Those dogs can be reliably expected to search any area they are in for prey. Their drive to do that is likely to be higher if their parents are working dogs but the desire to search for prey can be found in show bred dogs as well as in crosses of those breeds.

I’d like to see hunt routinely included in discussions about prey drive and the PMS because it is such a huge part of what can be expected from those dogs when they go on walks.

The other addition to the standard PMS that I’d like to see is possess, which is sometimes referred to as a desire to have and hold. Wild predators are unlikely to perform this at all, but many dogs are required to pick prey up in their mouth and deliver it to a person.

If a dog has a high drive and is strongly motivated to possess items, that can cause real issues for the bond between the dog and their human family. I routinely hear about dogs swallowing socks or aggressively guarding items or refusing to come close to anybody when they have something in their mouth.

The root cause is often that prized objects have repeatedly been taken from the dog by a family who don’t understand how important holding objects is to their dog.

A good understanding of the PMS allows for a greater understanding of dogs. If an owner reports that their dog chases anything that moves, the PMS can be used to help understand exactly what the dog is getting out of it.

Another possibility is that the dog sees a running rabbit and chases it because they want to possess it – carrying the rabbit around could be the dog’s main goal.

At the other end of the PMS, the chasing may be an extension of hunt. If the dog has searched the area using their nose to locate the source of the exciting rabbit scent, they may then continue to follow the scent plume that is coming from the rabbit as it runs away.

Or the dog could be interested in eyeing the rabbit and the chase happens in an attempt to get the rabbit under control so that the dog can perform the eye part of the PMS.

Lack of a detailed understanding of what is motivating the dog can lead to training plans that are not successful.

At the beginning of my journey in this area, I bought an excellent book about predatory chasing. When I read the blurb, I was convinced that the book would help me. After all, I’d seen Cuillin chase rabbits and deer several times.

I spent about 18 months diligently working through the guidance in the book. I taught him a great recall from a chase and, eventually, I could set up a rabbit skin to suddenly whizz off across the ground as Cuillin approached and he’d ignore it to chase a toy instead. That time, work and achievement made no difference whatsoever to the problems I was having with Cuillin.

I went back to the drawing board at that point and looked more closely at exactly what Cuillin wanted.

I realized that chasing wasn’t terribly important to him. What he wanted to do was hunt for the animals. I believe that when I saw him chasing, he was continuing the hunt section of the PMS. Indeed, he seemed to be happiest if the animal itself was no longer present.

I once witnessed him find a deer in an area where I thought there would be no deer. When the deer ran, he chased for a short distance, paused, and watched as if to ensure that the deer was leaving the area. Then he turned and went back to where the scent was.

His preference was to put his nose down and spend time absorbing the scent.

Why does this matter so much? Wouldn’t keeping dogs like Cuillin on a leash or long line unless in a securely fenced area solve the whole problem? From a human point of view, yes. Those precautions would work perfectly. From the dog’s point of view though, they don’t work quite so well.

Drive is about the intensity of the dog’s desire to interact in some way with prey animals. It represents an internal need that the dog has to perform those behaviors. So, interventions that prevent the dogs from doing so, may cause negative emotions for the dog, reducing the standard of their welfare.

To make matters worse, the most likely emotion for the dog to feel is frustration, an emotion linked to behavior problems, including aggression.

To prevent a reduction in welfare and an increase in behavior problems, the use of leashes and barriers to prevent the dog performing their preferred PMS behaviors must not be the only intervention. Those should go along with careful observation to determine what the individual dog feels the need to do, as well as a reward-based training plan that ensures the dog’s needs are met while keeping wildlife, livestock, the dog, and the dog’s owner safe.

Tracey McLennan MA (Hons), BSc (Hons) is the managing director and trainer at Best Dog Learning and Stuff in the UK. She has over 15 years of experience in dog training and behavior, having worked with a range of organizations from rescues to prison dog programs, as well as seeing private clients. She has degrees in both philosophy and canine behavior and training and is currently undertaking an MSc in applied animal behavior and training. She is also a Tellington TTouch Practitioner and an ACE Advanced Tutor.

Tracey is the author of Canine Aggression: Rehabilitating an aggressive dog with kindness and compassion. Alongside dogs, Tracey has had a successful career in IT as a systems analyst and developer. She now uses many of the skills learned in that role to help dog owners. Tracey offers online classes through her website and undertakes work as an expert witness for court cases.