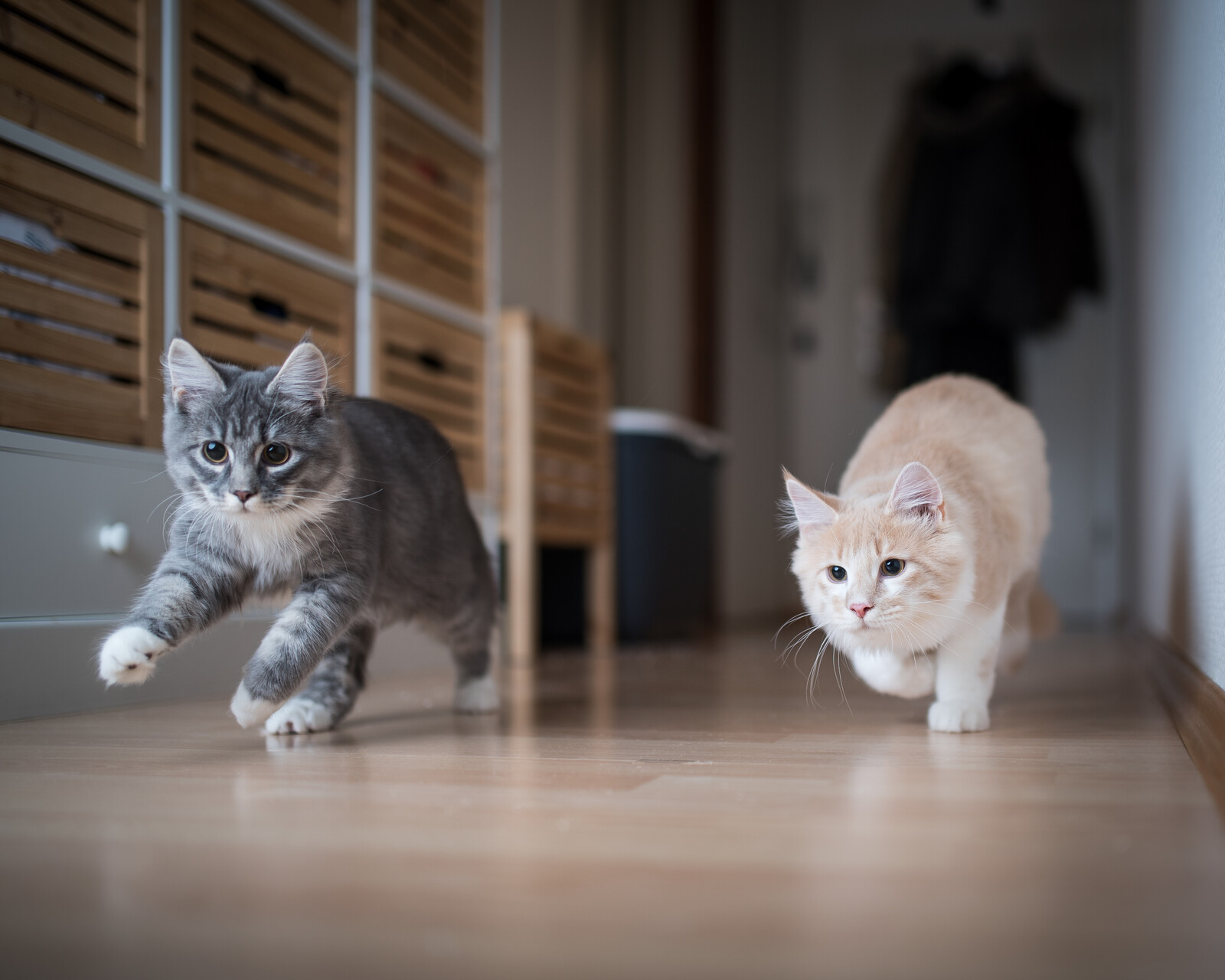 The problem with laser pointers is not only the potential frustration of never capturing the prey, but also the inability for the cat to physically feel the prey under their paws or with their whiskers and mouth at any point in the game © Can Stock Photo / FurryFritz

Laser light pointers are commonly found in pet stores and veterinary clinics worldwide. They remain an extremely popular toy with cat owners of all age. And yet, many cat behavior consultants generally discourage the use of them. Why?

Well, the simple answer lies in the idea that the incessant chasing of the red dot, without ever actually being able to catch it, could lead to frustration in the cat.

While they appear to be having fun in the moment and getting plenty of exercise at the same time, the cat is not following a hunting sequence and is never provided with the opportunity to catch the ‘prey.’.

However, while cat behavior consultants have long held this view on the use of these popular toys, there hasn’t been any specific research on the topic to back them up. Until now.

Last year, American research duo Kogan and Grigg published a study that explored the correlation between the use of laser light pointers (LLPs) in companion cat play and the reporting of excessive or abnormal repetitive behaviors (ARBs) in those cats.

Just over 600 cat owners, largely from the United States, Canada, and the United Kingdom, responded to the study’s survey. The cats owned by the respondents ranged in age from 1-2 years to older than 10 years. The majority were desexed and classified as indoor cats, with more than half living with their owners for five years or longer.

What the study found was a definite correlation between the use of LLPs in playtime with the cats and the development of ARBs such as spins, tail chasing, chasing lights and/or shadows, fixation on certain toys and obsessive staring at lights or reflections.

Interestingly, the study also found that, while more than half of respondents were familiar with statements such as “laser pointers can make cats frustrated if they do not get to ‘catch’ something at the end of play,” less than 40% of respondents followed that advice.

“It is concerning, therefore, that we did find a significant association between frequency of laser play and all forms of ARB, except overgrooming, and that LLP play was the largest predictor of ARBs. Overall, the more frequently LLP toys were used, the more likely guardians were to report ARBs.

“Although correlational, these results support concerns that LLP toys may be associated with the development of compulsive behaviors in cats, warranting further research into their risks.” (Kogan & Grigg, 2021).

In other words, many respondents stated they were familiar with the idea of cats getting frustrated by never actually catching the red dot, but most ignored the sentiment and chose to use them for playtime with their cats anyway.

There could be many possible reasons for this, including a laser pointer being seen as providing good physical exercise for the cat with little effort required by the owner; owners thinking frustration wasn’t something that applied to their cat; and owners’ failure to realize signs of frustration and stress in their cat.

As Pam Johnson-Bennett (2011) states: “Laser toys for cats are extremely popular. I think their success is based on the fact that they require minimal movement from the owners. You can sit in your chair, watch TV, and point the laser all over the room.

“For some owners the pleasure comes from the comical scene of watching their cats almost body-slam the wall in an attempt to reach the little red light pointed halfway up the ceiling…the cat never actually “gets” anything. A major component of interactive playtime is capturing the prey under her paw and letting her carpal whiskers detect movement.” (2011, pp.99-100)

The Problem with Laser Pointers

In other words, the problem with laser pointers is not only the potential frustration of never capturing the prey, but also the inability for the cat to physically feel the prey under their paws or with their whiskers and mouth at any point in the game.

So, what’s the alternative? Well, there are many other ways to help your cat fulfil their hunting instincts and give them physical exercise, whilst also ensuring that frustration and overstimulation does not have a detrimental effect on their mental well-being.

After all, mental well-being is of primary importance when it comes to our feline companions. Without it, or with a lack of it, cats will frequently experience stress, and stress is well known as a primary cause of the majority of feline health and behavioral issues.

Instead of laser light pointers, cat owners could consider the following:

My first choice for fun, interactive play with cats is the wand toy – a long, fishing-rod style toy with a feathered or fluffy toy dangling from the end that can be moved in such a way as to simulate prey in flight.

The toy can be used to take the cat through a complete hunting sequence – allowing them to stalk the prey, leap at it, sometimes catching it, sometimes not, manipulating it (which may involve flopping on their side to wrestle with it), and finally “capturing” it.

At this point, the owner should toss a tasty treat to complete the sequence. Several short bouts can be completed throughout the day (rather than long play sessions which may lead to over-stimulation).

One of the many reasons I recommend this type of play is it not only gives the cat a chance to complete a hunting sequence, but it also fully involves the owner in play and therefore increases the bond with their cat.

Many cats, particularly young ones, will enjoy self-play when their owners aren’t around. And we can also make this far more fun and beneficial for them than simply leaving them with a toy mouse or ball.  Instead, consider the following:

There are also toys on the market now that have motion detectors in them, turning on and moving or lighting up when the cat approaches.

The key to providing self-play toys and puzzles, however, is to have a wide variety which are rotated on a regular basis so that playtime never becomes boring.

And don’t forget about overall enrichment. Providing opportunities for play and human interaction is just one form of enrichment. Ensuring a cat’s environment also has everything they need to be happy and healthy – both physically and mentally – is crucial.

Be sure their resources are well-numbered and well-placed; that they have opportunities to explore and display all their natural feline behaviors; that they have safe spaces in every room; that their sensitive sense of smell is respected; that they have predictability and routine; and that they are given plenty of choice in all aspects of their lives wherever possible.

To conclude, then, let’s forget about the laser pointers and look to other less stressful ways of allowing our cats to exercise and display hunting behavior.

To echo Johnson-Bennett’s comments above, to me, the laser pointer is a lazy way to engage your cat in play. More often than not, it becomes all about the human’s desire to watch the cat’s acrobatic antics, rather than fulfilling the cat’s behavioral needs.

And it’s not something that can simply be fixed just by tossing a treat at the end of play. Laser pointers do not provide the tactile stimulation of the cat actually feeling the “prey” with their paws or facial features.

We owe our cats much better. We’ve brought them into our homes and many of us have asked them to live an indoor life to keep them safe.

In return, we need to provide them with an environment and interaction which fulfills their behavioral needs.  As part of that, the least we can do is be fully present in our interactive playtime with them and give them the chance to be rewarded for their simulated hunting efforts.

Andrea Carne is a graduate of the University of Southern Queensland, Australia where she majored in journalism and drama before, later in life, following her dream to work in the field of animal behavior. She is a qualified veterinary nurse and dog trainer and member of PPG Australia. Her special area of interest is cat behavior and her passion for it led to the establishment of her own cat behavior consultancy Cattitude, based in southern Tasmania, through which she offers private in-home consultations.
Tweet