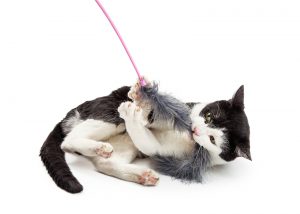 A study by Cecchetti et al. (2021) found that cats who engaged in play with their guardians using a wand toy for just 5 to 10 minutes a day brought home 25% fewer prey animals © Can Stock Photo / adogslifephoto

“Predation by domestic cats Felis catus can be a threat to biodiversity conservation, but its mitigation is controversial. Confinement and collar-mounted devices can impede cat hunting success and reduce numbers of animals killed, but some owners do not wish to inhibit what they see as natural behavior…” (Cecchetti et al., 2021).

So, instead of interventions which work on impeding hunting behavior – including complete confinement indoors, for instance – the study looked at what it calls “non-invasive” interventions which aim to reduce a cat’s want or tendency to hunt and/or their success in doing so, and whether these can actually be effective.