Teaching My Hound NOT To Hunt

This article details how a dog obsessed with chasing squirrels learned, through repetition and reinforcement of an alternative behavior, to leave the squirrels alone 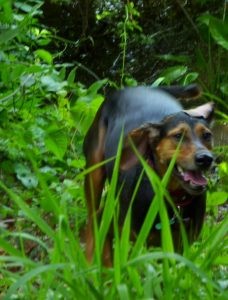 Shhhh. Can you keep a secret? I used to HATE walking my dog. Why? Because my neighborhood is full of squirrels, and every time my dog saw one, she went freak-show crazy. Airborne. Yowling, lunging, sometimes even pulling me off my feet and dragging me along the sidewalk.

People literally stopped and stared. Windows flew open and heads craned out to investigate the commotion. Oh, and the looks on their faces–judgmental, scornful, control-your-dog looks.

I was apprenticing to become a dog trainer at the time, so imagine how competent I was feeling. Not very.

But I knew this much: Yanking on the leash, yelling, and punishing her in any way weren’t my answer. I didn’t want a tough-guy approach. Rather than controlling my dog, I needed to teach her to control herself.

Like many fellow adopters of stray dogs, I’d made up a plausible but baseless back story for my hound mix, Huckleberry, a country gal from rural Virginia.

Once upon a time, she’d been someone’s hunting dog, trained to chase anything that moved and corner it in a tree to be shot. She’d probably spent little if any time on a leash. Maybe she was out for a romp one day, chasing critters to her heart’s content, and ventured so far that she lost her way home and landed in the pound.

This would explain a lot, I rationalized. Look what I was up against. A dog like that was a squirrel junkie; she wasn’t going to quit her habit cold turkey.

Well, whatever her past, Huckleberry definitely wasn’t alone in her obsession with squirrels. I did eventually become a dog trainer, and I’ve discovered squirrel chasing ranks way up there on our clients’ list of peeves.

Although dogs are hard-wired to scavenge for food, many also have some degree of prey drive, owing to their wolf ancestry and selective breeding for hunting with humans. And there’s an instinctual predatory sequence that, once triggered, can be almost impossible to interrupt if the dog’s on the loose, and pretty challenging even if she’s leashed.

It begins with the dog eyeing their prey, then stalking it, then chasing, capturing, and killing it. So when we try to stop them mid-chase, our dogs are already locked into the prey sequence and determined to complete it. Our best chance to abort and redirect squirrel chasing during our walks is to catch our dogs at–or before–the eyeing stage.

Easier said than done, right? Yes. But still, very do-able. Learning to interrupt Huckleberry at the point where she was still considering chasing the squirrel, but hadn’t set the wheels in motion yet, was the secret to our success.

And yep, let me brag a little… I did solve this one. Now when Huckleberry spies a squirrel, she turns to me instead of chasing–most of the time, anyway. (Nobody’s perfect.) I often don’t even have to give her a verbal cue anymore. The squirrel itself has become a cue for her to turn her attention to me.

I’m not going to lie to you: It wasn’t an overnight thing. It was a process that took many, many repetitions. We worked up to it gradually, with baby steps, and a generous dose of hot dogs.

Success took time, but I saw quick improvement and steady progress. Would punishing her have worked faster? For me, the point was moot since that approach was never on the table.

Scolding and punishing a dog for doing what comes naturally isn’t fair, and it doesn’t teach her what to do instead.

Instinct, not conscious choice, is driving the dog’s behavior. And behavior can’t just be cancelled. It needs an outlet–an appropriate one. For Huckleberry, I decided her alternative to chasing a squirrel would be chasing a treat.

Here’s how I did it…

May I Have Your Attention, Please!

Attention is the gateway to all other behaviors. If I have Huckleberry’s attention, I can ask her to do the things I’ve trained her to do. If she’s not tuned in, forget it.

Getting her attention when she was about to chase a squirrel was like a college-level exam. We were still in kindergarten. So I started out just capturing attention, meaning if she happened to look at me as we were walking, I rewarded her with a really great treat.

At first, I did it literally every single time she looked at me. She learned that focusing on me was a really rewarding behavior. After a while she was checking in all the time–as long as there were no distractions.

I also called Huckleberry’s name and rewarded her for looking at me. We did this over and over during walks, first with no distractions, then with mild distractions like a person walking in the distance, then with someone running by, then when she was sniffing something interesting, and so on.

If she didn’t respond the first time, I’d make some sounds to get her to make eye contact. If that didn’t work, I’d even put a treat on her nose and lure her around to look at me. I wasn’t going to take no for an answer, but I was going to make it as easy as necessary to help her succeed.

With time and practice, Huckleberry was whipping around whenever she heard her name. Once her “eyes on me” behavior was solid enough, I started putting it to use around squirrels.

I knew I needed to spot squirrels before Huckleberry did, or at least at the same moment she did, so I’d be ready to call her name and get her eyes on me. You’d have thought I was the squirrel hunter; I was always on the lookout. I even stopped listening to music on my phone so I’d be more alert.

At first, the squirrel had to be pretty far off in the distance for Huckleberry to disengage from it and refocus on me. With more practice–and more rewards–she got better and better.

All behaviors get stronger and more ingrained with more practice and more reinforcement. And I wasn’t just trying to teach Huckleberry a new behavior (looking at me, not the squirrel); I also needed to prevent her from rehearsing the old behavior (chasing the squirrel).

Looking at me was reinforced by me, with hot dogs. But chasing the squirrel was self-reinforcing, because it just felt good to her.

I didn’t want the chasing behavior to grow any stronger than it already was! No, it wasn’t the end of the world to have a setback now and then–that’s life. But by staying vigilant, I headed off a lot more squirrel chasing than if I’d been daydreaming.

Chase This, Not That

As getting Huckleberry’s attention became easier, I worked on maintaining it for longer periods.

For some dogs, holding their beloved owner’s gaze while passing a squirrel might be enough to squelch their urge to chase it. But I felt just watching me wasn’t going to cut it for Huckleberry; she needed to discharge her chasing impulse in a more physical, kinetic way.

I’m not that interesting to look at–not compared to a scampering rodent, anyway. So the second part of my sequence, after getting her eyes on me, was to toss a piece of hot dog.

I’d toss it in the opposite direction from the squirrel, far enough that she had to bound after it and then sniff it out in the grass. This typically gave the squirrel enough time to scramble up a tree.

Sometimes I tossed several treats, to buy the squirrel more time to get away. I found they’d often freeze when they saw Huckleberry coming, and then flee as soon as they saw she was occupied with something else.

So that’s how I came to LOVE walking my dog. My next challenge would be training Huckleberry not to chase my free-range rabbits inside the house.

Karen Baragona is a certified professional dog trainer (CPDT-KA) who owns and operates Eager Beagle Dog Training in Alexandria, Virginia. She has worked with hundreds of dogs and their people in training classes, home settings, and animal shelters since 2011. She also works as a behavior & training associate at the Animal Welfare League of Arlington, Virginia. She specializes in leash reactive dogs, anxious dogs, and dogs living with young kids and donates 25% of all earnings to shelters and rescues.
Tweet