This article sets out steps you can take to help ensure a smooth introduction between your human-reactive dog and your new partner, as well as their extended family 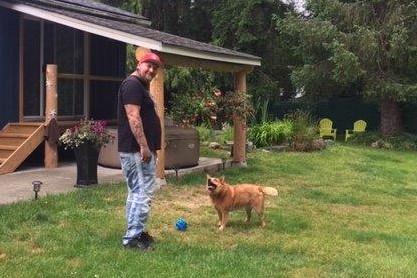 After a slow and careful introduction, human-reactive dog Gertie now has a new BFF © Gail Radtke

Sudden life changes can bring both many rewards and challenges. I’ve had the opportunity the past few years to share my experiences by writing about the journey that my three dogs and I have been on.

This experience is a deeply personal one that I felt I really needed to share, as I am sure there are many people like myself who have had to navigate this unknown territory. I’ve chronicled the lives of my dogs, but I haven’t really touched on Gertrude Mae (see Great Expectations, BARKS from the Guild, September 2015, pp.34-35) and her reactivity – both from my experience with her as a pet parent and also a professional in the field of canine training.

I recently wrote about my move with my dogs to Vancouver Island and leaving behind our family and friends (see New Beginnings, BARKS from the Guild, May 2022). For those of you who have a dog with human fear reactivity, you will understand how small your dog’s social circle can be and how very difficult and sometimes impossible it is to introduce them to new people.

Reactivity in an Emergency

My 22-year marriage was behind me, and I only knew two people in the area I had moved to. So naturally, one of my first concerns was, what in the world would I do in an emergency? I had nobody that could even enter my house.

I knew I had to take immediate action. I’ve worked with Gertrude’s reactivity for many years. We’ve made great strides ahead and we also do a great deal of risk management. This includes secure fencing, muzzle training, and most importantly, in my opinion, not putting her into a risky environment.

The protocols I used with Gertrude have been successful so far with four new people entering her life. But they have not succeeded in all my attempts to introduce her to new people.

Apart from needing to set up an emergency contact for myself and the girls, and expand my new social circle, after four years of being on my own I also found myself ready to start dating.

Dating and a Human-Reactive Dog

Let me start by saying this: dating and having a human-reactive dog is an emotional rollercoaster. Even when I first started to consider the idea, I thought to myself, how in the world is this going to work if Gertrude doesn’t like the person I’m dating? As it turns out I apparently value her opinion.

I can laugh a little now thinking back to the poor fellow I tried to introduce to Gertrude. Imagine me giving him the list of instructions on how the introduction protocol needs to go: stay over there, don’t move forward, don’t move your arms, and whatever you do, please don’t stare her in the eyes!

To say the least, the poor guy was nervous even before he met her. I’ll give him credit for trying but Gertrude would have none of it – and we did try several times.

Gertrude obviously did not want me to date him and so I didn’t. For me, it was an absolute deal breaker if she was not able to be introduced to the person whom I would spend time with. I was wanting a serious relationship and apparently so did Gertrude.

In the spring of 2021, I ended up utilizing my emergency contacts to the fullest. Well, all two of them to be precise. I tripped and fell on my hand breaking it in two places. Emergency surgery left me with pins in my hand and my two friends coming to the rescue, both for me and the pups.

It was during this time that fate would come knocking. Having one good hand and living on my own left me unable to complete some projects at my home so I reached out to my community (we know where this is going, right?!)

As the result of my outreach, a kind man, Mike, offered to come and help me, and after some doing projects together and lots of chatting, we started to date and get to know each other better.

Now comes Gertrude. I explained everything in detail to Mike and he was open and receptive. He loved dogs although he didn’t currently have one, and to be honest if he had his own dog, it would have created further complications.

As I have mentioned, having a reactive dog and dating is difficult. You have to consider whether the other person has children, dogs, or other pets, as well as if your dog accepts them in the first place.

I’m used to Gertrude (mostly) disliking everyone she sees, but when Mike arrived at my home for the first proper introduction, after a short period of time I observed her body language (which is normally tense and defensive around strange people) quickly become that of a dog who wanted this new person to throw the ball for her.

I can’t stress enough how vital it is to learn about canine body language if you have a reactive dog. Many signs can be quite subtle and get missed, causing the dog to escalate the behavior in order to create the distance they are trying to get from the object of discomfort, (aka distance increasing signals).

The Edmonton Humane Society has great resources on canine aggression and in their handout Human Directed Aggression they state that you need to “change your dog’s perception about strangers.” And this is what we did. Pairing Mike with Gertie’s most beloved item, her ball, is what brought us success, and Mike and I have now been dating for a year, thanks to Gertrude Mae. 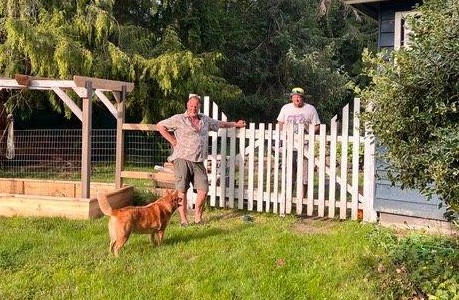 Recently, Mike’s son came to visit, and we had the opportunity to go through the introduction process again. This time I was able to watch more as a bystander, which allowed me to view the process more objectively rather than being a part of the process.

Looking for the subtle body language from Gertrude was key, watching the tension in her body and face, her level of engagement, and her overall comfort level.

The process could only go forward if Gertie was relaxed and displaying non-threatening gestures. A great book on canine body language is Canine Body Language – A Photographic Guide by Brenda Aloff. Aloff’s book has helped me immensely in learning about and understanding canine body language.

Mike’s son is also called Michael, so we will refer to them as Mike and Michael. The initial introduction went relatively smoothly, and Gertie did display distance increasing signals by barking at Michael initially. She lunged forward quickly once but Mike was able to interrupt the behavior by throwing her ball, which re-engaged her back into play behavior. 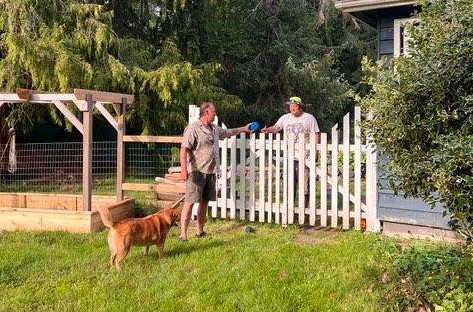 We used the garden gate outside as a safety barrier. Michael stood on one side with a bag of high-value treats and Mike was on the other side of the gate with Gertie and her ball. Mike would toss the ball to Michael, who would then throw it for Gertie to retrieve. He would also toss treats over the fence to her.

Due to Gertie having a negative response during the beginning of the introduction, we decided to stay behind a barrier for the rest of the first evening and continue the introduction process inside the house. I used an exercise pen as the barrier to my living room while we sat at the table for dinner, creating inclusion for Gertie.

Michael was able to stay engaged with her and toss treats over the barrier. Gertie started to display engaging body language towards Michael as she quickly realized he was the giver of good things for her.

This included a soft tail wag, soft eyes, and (Gertie’s signature move when she wants treats) the ‘head down’ move where she places her chin on the ground or any object close to her. We closed the evening behind the barrier and celebrated success for Gertie. She had done amazingly well having this stranger in the house and I believe at that point she decided she had another friend. 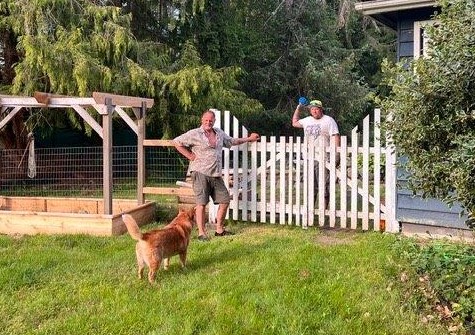 Michael, now the giver of fun things for Gertie, prepares to throw her ball © Gail Radtke

Michael returned the next day and we started the protocol again at the garden gate.

Gertie was immediately excited to see Michael as she now associated him with ball play and treats. She was bringing the ball right to him and the gate for him to throw. However, for precautionary measures, Mike would still hand the ball to Michael to throw instead of Michael reaching over the gate.

When Gertie started her demand barking at Michael to throw the ball, I knew we had success. Mike opened the gate and Michael threw the ball for her and play began between them directly.

Gertie loves kickball more than throwing, which eliminates the risk of a hand getting nipped if she is startled by sudden movement at the beginning of the play relationship.

For those of you with a human-reactive dog, you know that it is such a cause for celebration if your dog makes a friend. Being able to bring someone safely into your home is a big event, especially when you are used to having to isolate your dog in order for anyone to visit. 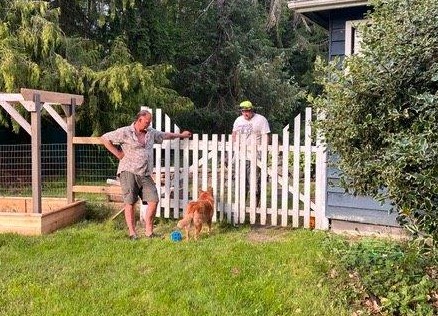 There are so many variables to the introduction I outlined above and its potential success, including the level of your dog’s reactivity and response, the safety setup, and the person you are introducing.

It is my opinion that this should be conducted by a professional, force-free trainer. Human-directed reactivity is far too risky.

Depending on one’s situation many things can be used as management aids, such as a muzzle, a leash, or a long line to limit the dog’s access to the barrier. In addition, this should only be done with adults due to the potential risks involved.

It is crucial to understand if your human-reactive dog is a bite risk and what level of bite could occur. A study on the behavioral assessments of 65 dogs after a bite had occurred stated that “dangerousness was based primarily on severity of injuries as well as appropriateness of aggressive behavior given the context, behavioral sequence, and type of aggression.” (Frank et al., 2021).

Given Gertie’s size, history and the safety measures put in place, I knew the bite risk was very low, and if for any reason a bite did occur, the severity of it would be minimal. The risk was discussed in full with Michael and with Mike when he first met Gertrude in July 2021.

What is important is that it’s what your dog is comfortable with and it’s something that your dog wants.

For Gertie, she just wanted another person in her world to kick the ball to her.

The author would like to extend a heartfelt thank you to Mike Ohlenschlager and his son Michael for caring about Gertrude’s well-being and working through this introduction protocol with her.

Gail Radtke CPDT is a retired correctional supervisor and former instructor of the Justice Institute of British Columbia, Canada. Gail has combined her passion for dogs and teaching and is a Certified Canine Fitness Trainer and a Dogsafe Canine First Aid instructor. She is also Fear Free certified and has recently completed her DipCBST. She is the owner and operator of Cedar Valley K9 in Campbell River, British Columbia, Canada.
Tweet