OK, I’ll admit it, I’m having a tiny bit of puppy envy. I’m working with a private client and his 13 week old springer spaniel. This wide-eyed cutie pie has already met everyone and everything on the ASPCA socialization list except the hot air balloon (and since we’re not in Albuquerque, we can probably skip this one). He’s game for anything and well on his way to being practically bomb-proof. He’s had very few chances to develop exasperating habits. He started learning basic manners the moment he stepped through the door of his new home a month ago, and he’s already mastered stuff a lot of adult dogs still can’t do. If not exactly a blank slate, he’s certainly far less set in his ways than my own rescue hound was when she entered my life right at the cusp of canine adolescence. Maybe in a parallel universe there’s a parallel me that would jump at the chance to start from square one with a baby dog and get him off to the great start my dog didn’t have. 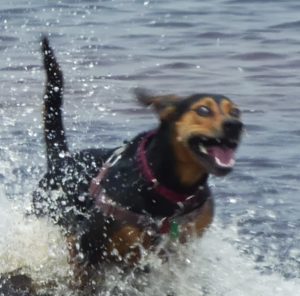 When we adopted Huckleberry, there was so much remedial work to do, so much missed socialization to compensate for, and so many undesirable behaviors to retrain. She didn’t even know “sit”. She was dog-reactive on leash. She was reactive toward some people, too–like if they were wearing a hat or sunglasses, carrying a recycling bin, dressed in black, walking with a limp, riding a skateboard…. Everyone else? She’d nearly knock them down with zeal. She was a resource guarder, and I was a prized resource. If I was sitting on the couch with her and one of my kids approached, she’d growl. She was terrified of riding in the car. She’d literally pull me off my feet in pursuit of a squirrel, or a person she desperately wanted to greet. If she escaped from the house, it took me a good half hour of chasing her through the neighborhood to get her back inside.

I’ve been asked, if I’d known what we were getting ourselves into, would I have chosen a different dog–or started from scratch with a shiny new puppy? I’d rather answer a different question: What have I learned from training, and loving, the dog we did chose? The experience of raising this dog, and helping her thrive in our home and our world, is something I wouldn’t trade for all the perfect little puppies on this earth. Here are some of the lessons I treasure:

Empathy: I’ve had dogs most of my life but never one with so many challenges. But that means I can empathize with almost every training client and fellow dog owner over one problem or another. And because Huckleberry, now three years old, has acquired some darn good manners to match her good heart, I can reassure clients that we can tackle their problems together, and a good outcome is well within reach.

Compassion: What was it like to be Huckleberry? What did it feel like to worry so much, not understand how things work, not be able to control herself? Yes, I got impatient with her at times and wished she’d just snap out of it, get over it. But I knew she wasn’t “misbehaving” on purpose. I’ll never know where she came from. But clearly the world we brought her into was unfamiliar to her, so sometimes it felt threatening and overwhelming. It was my responsibility to guide her through and help her cope. 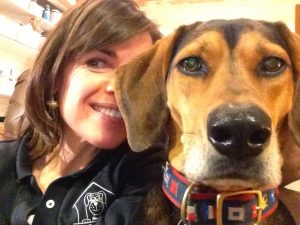 Confidence: When we adopted Huckleberry, I’d just started a dog training apprenticeship and was eager to put my precious few skills to work. I was an experienced dog owner but a very green trainer. I felt like I was in over my head. Huckleberry was a LOT of dog. There was a lot “wrong” with her. If I couldn’t “fix” my own dog, that must prove that I was destined to become a very sucky trainer indeed. I started bringing Huckleberry to manners classes at the dog training facility where I was apprenticing, and she was so over-aroused that she barked her head off the whole time. The instructor handed us the “peanut butter Kong of shame”. It’s what we give clients whose dogs are disruptively vocal; it keeps their mouths busy and stuck shut. When that didn’t work, we were “exiled” to the lobby so we could focus and give the rest of the class some peace. I was deeply, deeply mortified. 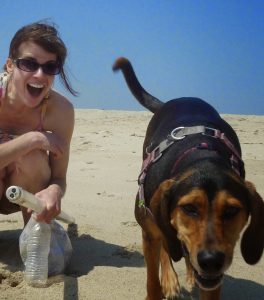 Yet I was also obsessed with becoming a better trainer. And my “problem child” became my pet project. I learned to stop trying to fix her. I learned to motivate and reward her, to manage her environment and set her up for success, to counter-condition and desensitize her to her many triggers. I cultivated patience and put faith in the process, and in myself. I celebrated our progress. I eventually became a training instructor at the same place where I’d been an apprentice. I’m proud of Huckleberry, and I can hold her up as proof positive that positive training works. It turns out that in the two years I’ve been teaching classes, I have never had a single dog as maniacal as Huckleberry was. So now I realize what I was up against. I had a hard case. I did good. I’m not a sucky trainer after all.

A thicker skin: For sure, Huckleberry is not a quiet creature. She has a lot to say about everything. All her emotions spew out through her mouth. Yes, when she gets excited or upset about something, she barks like a banshee. This tends to draw looks, and not the adoring kind you might give a smiling baby or playful kitten. These are withering glares that say “What’s wrong with your dog??” and carry a subtext: “What’s wrong with you, if you have a dog that does that??”

I’ve done a lot of work with Huckleberry, and today she’s far less prone to these outbursts. She can go to Petsmart or stay in a hotel with us and comport herself like a lady. But that took a while, and those judgy stares really used to hurt my feelings. I thought, they have no idea what it’s like to have a reactive dog, and how hard I’m working to help my dog through her anxious emotions. By now I’ve toughened up. I avoid situations that might put Huckleberry over the top, but when I do bring her into a challenging environment, I carefully manage things to keep her under threshold. And if she has a little barky fit once in a blue moon, well, tough toenails if someone doesn’t like it. I know how to quell it fast. Plus, I know I have a good dog. 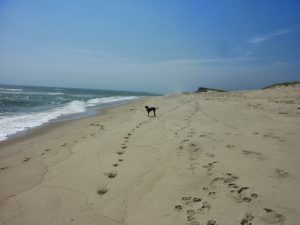 Acceptance: Huckleberry’s behavior is so close to what we might label “normal” these days that I sometimes forget how life used to be. But it’s not just all the training Huckleberry and I have done. It’s also that I finally found the serenity to accept the things I cannot change. Why do we, as dog owners and dog lovers, sometimes feel that our dogs are an extension of–and therefore a reflection upon–ourselves? That our dogs should do what we say, when we say it, and never deviate from the standards we set–and anything less makes us look bad?

My dog isn’t a remote-controlled robot. She’s not some Victorian-era child sitting primly with hands folded in her lap, being seen and not heard. She’s a dog. She’s MY dog. She’s a living, breathing, thinking, feeling being with her own opinions and her own agenda. Her priorities don’t always align with mine. That’s ok. That’s who she is.

I often wonder whether a different adopter might have given up on Huckleberry, with all her difficult behaviors, and returned her. Maybe. They’d have missed out on something wonderful. Yeah, Huck still sometimes does stuff that gets on my nerves. But so do my kids, and I’m keeping them.