This article was first published in BARKS from the Guild, April 2014, pages 37-39

Jambo the Staffie has won countless awards and accolades, yet is officially classified as a potentially dangerous dog. Louise Stapleton-Frappell explains why Breed Specific Legislation completely misses the point. 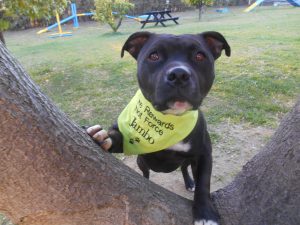 Jambo is our second Staffordshire Bull Terrier. Our first beautiful Staffie, Samson, was the most loveable boy ever. Calm, good natured and playful, Samson died at the age of 11 having lived a life of freedom and without the restrictions of Breed Specific Legislation (BSL). His best friend was our Doberman/German shepherd, Bess, who was a couple of years older than him. We would go for long walks in the countryside and on the beach where they were able to run around, have fun and enjoy their freedom.

After Bess passed away, we added Tessa, our wonderful German shepherd, to our family. She and Sam became best buddies but sadly she only had his company for a couple of years as he was already nine-years-old when Tessa joined us. Tessa was nearly five-years-old when Jambo came into our lives. We had already decided we would like another Staffordshire Bull Terrier but, unlike the situation elsewhere, there are not many Staffies in Spain. Luckily we heard of a family who had had a litter so we went to meet them and the rest is history! 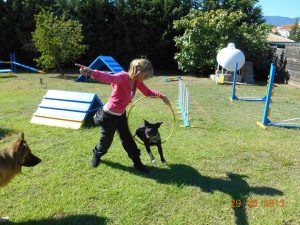 Jambo was born in 2012. His pedigree name is Warrior For Life but I wanted a name that would reflect his personality and not be too ‘hard’. I also wanted to name him something similar to our first Staffie boy, Sam. Jambo is the Swahili (think ‘warrior’) word for ‘hello’ and Jambo loves to say greet everyone he meets.

Jambo proved to be extremely loving, very mischievous, inquisitive, energetic and quite a handful! I started teaching him the basics straight away but as he got a little bit older I  wanted to do something more to use up some of his boundless energy. And so began our journey into performing tricks, which we eventually introduced at a Trick Dog Seminar given by Nando Brown.

By then, BSL was present in Spain, having come into force in 1999, and I wanted Jambo to be an absolute example of how amazing the so-called bully breeds are. We found ourselves on a mission to smash the stereotype! 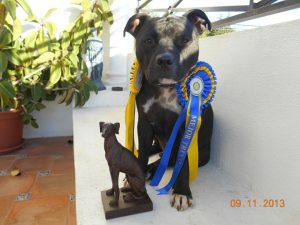 Jambo received his first Trick Dog title at just seven-months-old. By 14-months old he had already won seven Trick Dog titles, including ‘Expert.’ We also worked on general obedience and agility. We train everything using positive reinforcement and love to point out to people that it is a total myth that you need to have a ‘stronger’ hand with this ‘type” of dog! I am not Jambo’s leader and I do not command him to do anything. We work together as a team and he gets rewarded with food, play,  cuddles and fun. I firmly believe that we would never have achieved what we have if I had tried to train him in any other way.

At only 16-months-old Jambo achieved something no Staffordshire Bull Terrier had done before – he became a Trick Dog Champion! We immediately launched his Facebook page to celebrate his Trick Dog Champion title and to promote doing dog tricks and positive reinforcement training. We hoped to inspire others to do more with their dogs. We also wanted to try to help break the stereotype attached to the so-called bully breeds and highlight the injustice of BSL!

In 2013 Jambo was featured as Dog Of The Week for Your Pit Bull & You. He has also won rosettes and trophies for Obedience, Agility, Tricks, Best Dog, Best of Breed. He loves people and playing with other dogs. His photos and videos have been shared by Dangerous Dogs Act (DDA) Watch UK who work tirelessly to help dogs and families affected by BSL, as well as by many other groups fighting against breed stereotypes and BSL.

Jambo was honored to be named as ‘Dog Of The Year 2013’ by In The Doghouse DTC in recognition of all we had achieved in our work as bully breed ambassadors. 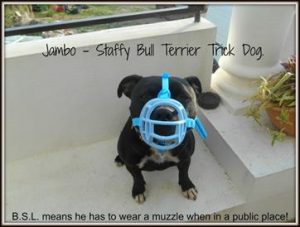 Despite Jambo’s many accomplishments, all his training and his good character, he is classified by the authorities as a ‘potentially dangerous dog.’  Jambo was born into BSL and, although there is no outright ban on his breed in Spain, BSL affects everything we can and cannot do. Jambo had to be registered as a potentially dangerous dog. He has to be kept on a 3 ft. leash and muzzled when in public. We have to get an annual veterinary health report stating the inexistence of illnesses that could make him ‘especially dangerous.’ He has a microchip – the number of which is registered as that of a potentially dangerous dog. He has to be enclosed by walls at least 6 ft. high (or kept on a chain – which we would never do)) and placed in a secure location should visitors come to our home.

He also has to be registered with the local town hall. He cannot go near any area designated for children. I have to have a potentially dangerous dog handler’s license; a psychiatric report; no criminal record; a  physical report stating I am able to ‘handle” him; public liability insurance for at least $244,000. I cannot walk or transport more than one “dangerous dog” at a time…. Fines for infractions are up to $160,000 and the authorities have the right to seize and destroy him if they see fit.

The following breeds are classified under BSL in Spain: American pit bull terrier, Staffordshire bull terrier, American Staffordshire terrier, Rottweiler, Dogo Argentino, Fila Brasileiro, Tosa Inu and Akita Inu. Different regions include various other breeds in the list, such as the Doberman, all Mastiff types or the German shepherd. Legislation also includes any crosses of the above breeds and any dogs with the ‘right measurements, i.e. width of chest, head, mouth, length of leg, weight, short hair and so on

So there is to be no running free in the countryside or on the beach for Jambo. By sharing Jambo’s photos and videos we hope to show everyone how awesome the bullies are. To show how positive reinforcement is the ONLY way to train. To show that you don’t need to be a ‘pack leader’or bully your dog just because he happens to be a ‘bully.’ To show the fun you can have doing dog tricks and, finally, to spread the word about the injustice of BSL.