Before You Share That “Cute” Dog and Baby Picture… 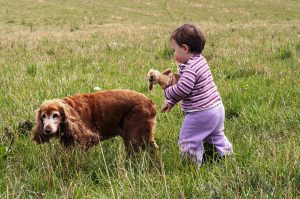 This dog is showing avoiding behavior towards the pursuant child. Photo by Shutterstock

First things first. I didn’t write this with you in mind. Let’s not make this about your dog or your parental decisions.

But there’s a problem with sharing that “cute” dog and baby picture. The problem is bigger than your individual situation, your family.

The myth is that good dogs, family dogs, your dogs–don’t bite. The myth says that dogs who live with us, dogs who like our kids, dogs who have always been “tolerant”–will stay that way, no matter what we or the kids do to them. The myth also says that dogs are supposed to take whatever kids dish out.

OK–remember–we don’t have to be talking about your dog. But when you post a picture of anybody’s dog with a very young child draped over him, hugging him, riding him, pulling his tongue, tail, or whiskers, or just plain sitting too close to him, and you “Like” it or include an approving comment, you feed the myth. The myth that gets some people’s kids terribly hurt or killed, and dogs euthanized.

Dogs are animals. They can move with lightning speed if they feel the need to. If you are six feet away taking the picture and the dog has his face right up next to your baby…you can’t get there near fast enough. Even if you are sitting right next to your child, the dog can still move faster than you.

A dog doesn’t have to be “vicious” or “mean” to bite. Sometimes all it takes is for him to be startled. Very young children, with their erratic movements, lack of fine motor skills, and exploratory natures, can stress out the most tolerant of dogs. It’s not fair to subject dogs to that. It’s not wise, either. Having a dog’s face, with that mouthful of teeth, up close to an infant’s head is an enormous risk. It’s not something to show off on social media.

A lot of people out there believed the myth until they learned otherwise. The hard way. The tragic way. Here are some real quotes from real people–mostly parents–from real news stories about dogs seriously biting children. The quotes took about 15 minutes of web searching to find. I promise–they are real.

“Fido” was super cuddly, the nicest dog you would ever imagine, and never once snapped … never growled, nothing. He never, never, never went after a person. I’m just in disbelief. –2015

In an apparently unprovoked attack, a 3-year-old child was bitten by a pet dog on Saturday… The girl was playing with the 2-year-old dog just before noon when she was bitten on the top and back of the head.–2015

She said the bite was out of the blue. “Mary” has known and played with the dog for years.–2014

I stood in the kitchen with my friend and her dog and my little girl. It was completely out of the blue, he jumped at my girl and tried to headbutt her to put her to the floor.–2015

He said the dog had no previous biting incidents, which is why he didn’t think anything of turning his back while his daughter went to play with the dog.–2014

The dogs had given no prior indication of behaving in this way, it was an attack out of the blue.–2015

What I didn’t include in the above quotes are the clues that were often just a few sentences away in the news story. The bites don’t usually come without warning, if one only knows how to read the signs. Perhaps the dog just got back from the vet after getting some shots. Maybe there’s a brand new dog in the household. Perhaps it is mentioned in passing that the dog doesn’t really like his tail pulled (but the child was allowed to do it anyway). Maybe the dog has growled in the past, and the owners duly punished him for it. (That’s a bad idea, by the way.)

Shooting Down the Myth

Maybe I can’t persuade you that your dog has the potential to do animal things. Maybe you simply can’t believe that your dog could get fed up one day and bite (probably after several warning signs that you might miss). Perhaps you’ve got the single most tolerant dog in the world. Can I persuade you not to share those pictures anyway? Your own or anybody else’s? Sharing them feeds the myth. If you share, you are implicitly condoning dangerous practices. You are encouraging others to let their kids get too close to their dogs and let them do uncomfortable things to the dogs for the sake of the myth, the romantic noble dog meme, that 15 minutes of Facebook fame.

There’s nothing new in what I’ve written here. (For instance, check out the second and third articles listed below.) Trainers and behaviorists cringe whenever they see photos like the one going around right now because probably this very week they have seen several very nice family dogs who bit a child “out of the blue.” The parents were loving and well intentioned, but they grew up with the myth, and they still see social media saturated with it.

Do learn about dog body language. Do keep your children and dog safe. Do check out the resources below on how to do that. Most of them have multiple, excellent articles on the subject.

Help educate people about safe practices with dogs and children. You can share the materials below instead of sharing that photo. Thank you!