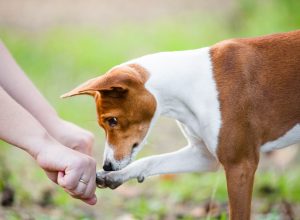 A working dog without a job can provide challenges for owners but keeping them outside is not the answer. Photo © CanStock Photo

When the lady called me she explained the situation: the dog actually belonged to her son but as he was away at university 3, 4 or even 5 days a week, she looked after the dog during the week. He was 9 months old and needed a “bit of training”. (I quake at these words!) He wasn’t a “bad” dog – he was just making a mess of the yard, destroying his toys (how sad it would be to have a dog that didn’t destroy his toys) and didn’t want to give the ball back. The hardest thing, the woman said was that he pulled so strongly on lead. She was the only person who walked him and he was too strong for her.

Newman was magnificent. Of mixed breed, a Border Collie crossed with something similar, he was big, black and shiny with intense eyes that regarded you intelligently. But things were wrong. While I was interviewing mother and son, Newman sat outside, peering in the door, vocalizing gently. “Could he come inside?” I asked. Absolutely not;

Newman was “a working dog”.

I suggested a front attach harness could help with the pulling. Newman responded well when I put a demo harness on him. The woman was pleased and was about to order one when the son said it was too expensive. She said she’d pay. He said no, it would be a waste of money, apologized to me smoothly for loss of a sale!

The lady, who obviously loved Newman with a love that was reciprocated, worked interstate 3 days a week. Newman was left to the care of the husband, a retired fellow, who was prepared to feed Newman once a day and that was all. The backyard was the place for dogs. Even when the husband was working in their (very large) front yard Newman was not allowed to join him. He was a working dog.

In spite of reminders that Newman was not doing any work he was still a working dog. “Would he insist that a Corgi or Sheltie be left outside because it was a working dog?” I asked. That earned me a look of derision.

I wasn’t surprised when the lady phoned me a few weeks later to say she desperately needed help. Newman had started jumping the fence and her husband wanted to relinquish him (such a euphemism) to the pound.

Bindi was an 8 month old Australian Kelpie. Her owner had recently moved from the centre of a big city to a property in my area. Being on acreage she had, of course, to have dogs and horses. There was an assortment of horses she said she was training, 2 adult Rottweilers that were kept penned and Bindi. She had bought Bindi because she wanted protection; her husband came home late at night and she was afraid of the emptiness outside. So Bindi lived outside with no human interaction other than when she was being fed. She couldn’t understand why Bindi was not happy with the huge area she had to roam in and why she was so uncontrollable. She hadn’t done any training with Bindi – the large property should have been enough to keep her happy.

When I arrived, Bindi was in her super-sized yard and immediately homed in on my car as it approached. I got out and, of course she jumped all over me, licking every part of me she could get at. The woman came out of the house and said, “You see what she’s like! She’s out of control.” She was so incensed that she had obviously not noticed that Bindi was now sitting alertly in front of me and moved only when I moved.

The antics that the woman pointed out to me during the couple of hours I was there were purely boredom motivated – jumping on the kids’ trampoline, barking when it bounced, digging her way under the gate when the woman was showing me what happened when she was ‘training’ the horses, failing to come when called, etc, etc.

Could she perhaps do some training with Bindi? Maybe bring her inside to get her clicker trained and then teach her a few little behaviours like “sit”, “drop” and “bed”? Maybe even teach her a trick or two? But of course she couldn’t – Bindi was a working dog! She couldn’t come inside!

There was nothing I could do for Bindi or the woman. Bindi was a working dog without work and should have been grateful for all the space she had to roam in. The woman was getting to breaking point because Bindi was ruining her expectations of an idyllic country life.

Bindi’s case was something quite out the ordinary for me. People who call me usually want to do something for their dog. This lady wanted me to wave a magic wand to restore her dream.

I hate doing it, but I have now got to the stage where I won’t take on a case where the dog involved is an outside dog unless I have a reasonable expectation that I might be able to convince the owner to let the dog come inside. I have my own sanity to consider. It is just too heart wrenching when I see a dog relinquished after all because there are no magic remedies.

Every time people use the excuse “… but he’s a working dog…” I think about Rose, a breeder of Old English Sheep Dogs who put me through the third degree many years ago when I was trying to buy a pup from her. After several interviews, she came to my home, examined my setup thoroughly and finally agreed to sell me a pup. The key to my successful application was that my dogs lived inside. “People who think they want an outside dog should keep chooks instead,” she’d said.

Bindi’s case was a foregone conclusion. I did have some hopes for Newman, though. At the time I was working with Newman’s family I was about to start a Canine Good Citizen course. I encouraged the woman to join because Newman had the potential to succeed at the highest level and the woman so obviously wanted to do the right thing by him. She agreed. She came to the meeting I ran before the course. The following weekend as I was coming out of the supermarket I heard someone calling me. It was her. She was with her husband. He was strongly opposed to her doing any sort of course with Newman.

She was brave enough to attend the first practical session. She said she would be working interstate all the following week but would attend both sessions I was holding the week after.

When she didn’t arrive I phoned her. She didn’t answer. I emailed. She emailed back. Newman had one of the new harnesses and was walking on lead perfectly. No more jumping the fence.  All problems solved.