Prettier by Another Name 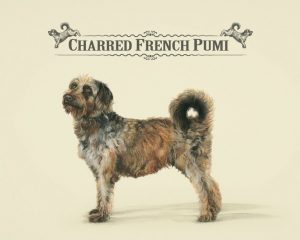 How much does a dog’s breed matter, particularly when that dog is of mixed breed heritage?

When people are seeking a pet dog, breed, or, more likely, what they think they know about various breeds, can heavily influence their choices. But in the end, knowing — or guessing at — the dog’s mix of breeds doesn’t tell you very much about an individual dog.

A shelter in Costa Rica, as described in Bark magazine, took a creative approach to communicating this message. Working with marketing professionals, the shelter promoted each mixed-breed dog as a unique breed. The campaign was a huge success: Adoption rates shot up, and the shelter gained new sponsors and additional funding.

The authors of a study published by PLOS One in March argue for going one step further and dropping breed labels altogether. Researcher Lisa M. Gunter and her co-authors conducted four studies that looked at the effect of labeling dogs in shelters with breed names. They compared the adoption rates and length of stay for dogs labeled as pit bull-type dogs with those of “lookalike” dogs labeled as other breeds. The lookalikes were matched for appearance, age, and sex.

The study was very thorough. They had people look at still photos and videos, and the surveys included questions about all participants’ experience with dogs. One study showed the dogs photographed alone and with different types of people — a child, an elderly woman, an athletic adult male, and a tattooed adult male. They then asked participants to rate the dogs’ intelligence, aggressiveness, approachability, and trainability. Others showed the pit bull-type and lookalike dogs with randomly assigned pit bull or other breed labels and asked similar questions of people who had come to a shelter looking to adopt a dog.

While there was no difference in the attractiveness ratings of dogs with no breed labels and dogs with non-pit labels, the same dog received lower ratings when shown with a pit bull label.

The researchers also looked at a shelter in Florida that had removed breed information from kennel cards and online descriptions. They looked at adoption numbers and length of stay for all dogs in that shelter for one year with the breed information and for one year after the breed labels were removed. Adoption rates were higher for all breeds without breed-information labels, but the most significant increase by far was in adoptions of pit bull-type dogs. Showing the pit-type dogs in photos with an elderly woman or a child also improved the dogs’ ratings.

People’s perceptions about breeds has long been seen as a factor that influences the choices of potential adopters. This study, and the Costa Rican shelter’s approach, suggests that shelter staff can use that knowledge to the benefit of dogs.

The study authors suggest focusing on behavioral traits of the individual dogs rather than their supposed breed heritage. This should be music to trainers’ ears! Shelter staff and trainers can use personal experience with each dog, paired with a behavior assessment done using an evaluation tool like C-BARQ, to create descriptions of each dog’s temperament. The researchers suggest that replacing breed labels with these descriptions could do a better job of providing useful information while also improving adoption rates.

While there are limitations to this study, it is comprehensive and informative. The published paper, titled “What’s in a Name? Effect of Breed Perceptions & Labeling on Attractiveness, Adoptions & Length of Stay for Pit-Bull-Type Dogs,” is available on PLOS ONE.