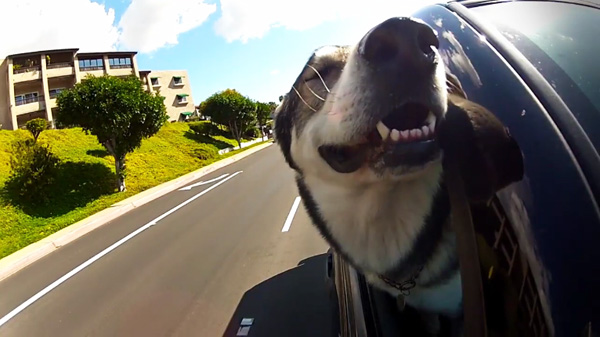 NOT my dog.
from dogster.com

Poor shivering, quivering Huckleberry. Not because it’s cold out; she couldn’t care less about that. This is fear. Huckleberry is about to experience something that makes most dogs jump for joy, and she’s beside herself with fright: She’s going for a ride in the car.

Part of this is my fault. When we adopted her three years ago, Huckleberry was a country bumpkin from the wilds of western Virginia, naive to the ways of Suburbia. Like so many rescue dogs, she was overwhelmed by the kaleidoscope of odd sights and clatter of new sounds. And like so many adopters, I tried to fast-track her adjustment.

I was a new trainer at the time, well-informed enough to know “the rules” but too green to apply them prudently. I knew I needed to socialize Huckleberry, but I got overzealous. I took her everywhere, which involved a lot of driving. Huckleberry was a hyperactive, hypervigilant passenger. She vaulted from the back seat to the front and back again, yelping explosively at the sight of other dogs, clusters of kids, people carrying umbrellas, motorcyclists, a teenager streaking by on a skateboard, construction workers in reflective vests and yellow hard hats…you get the picture. I knew enough to throw treats, but she was usually too frantic to eat them. It was too much, too fast. My understanding of the socialization process just wasn’t nuanced enough to get it right. And I poisoned the car.

Socializing dogs is a widely misunderstood concept among their owners. Socialization has two essential components. The first, exposing a dog to new stimuli, sounds pretty straightforward. The second, ensuring it’s a good experience–or at least preventing a negative association–is where it becomes a much more delicate operation. And desensitizing dogs to something they already fear requires even greater finesse. More than anything, doing this well takes patience. Take things sloooow. Nix the notion of a quick fix. For thorough coverage of the subject, I strongly recommend the article “Don’t Socialize Your Dog” on Karen Pryor’s Clicker Training website. Also, look for the Jean Donaldson video link at the end. 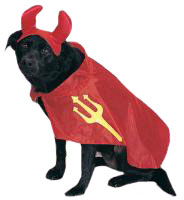 Last Halloween I ran into a neighbor trick-or-treating with her two young sons. At her side, the family dog was suited up in a red devil costume, complete with horns. Crouched low to the ground, tail between his legs, eyes wild, he vibrated with anxiety. I smiled and said her dog was cute but looked a little worried. She answered, “Yeah, he’s afraid of people and he needs to get used to them.”

What can you offer people in such circumstances? I wish I could say, “If you were deathly afraid of snakes, could you conquer your fear by surrounding yourself with pythons and cobras and vipers?” But she didn’t ask for my opinion, and she didn’t see that her dog needed help. Plus, I shouldn’t judge. I’ve made similarly well-intentioned blunders that jacked up my dog’s fear instead of quelling it. Looking back, I can see how often I pushed Huckleberry over threshold with poorly managed exposure to novel experiences or scary triggers.

What my neighbor and I should have done was very methodically, with an abundance of caution, introduced our dogs little by little, one thing at a time, to potentially jarring aspects of suburban life. We should’ve kept things short and sweet, paired each experience with super high value treats to create a positive association in our dogs’ minds, and ended on a good note. We should have scrutinized our dogs’ body language for signs of stress, and if our dogs showed any fear, we should’ve backed off, slowed down, and made things easier for our dogs. 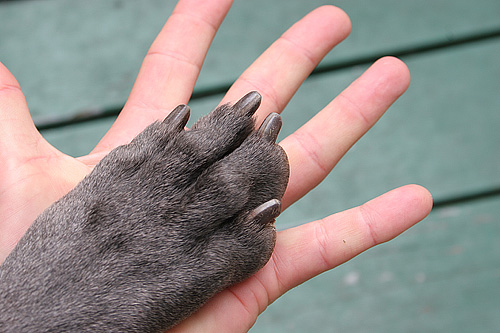 Besides learning to read their dogs’ stress signals, backing up and slowing down are among the toughest challenges for clients in the classes I teach. For example, we do a classical conditioning exercise with a one-touch-one-treat formula and a go-slow rule for handling sensitive body parts, like paws. But too often, when a client reaches for his dog’s paw and the dog retracts it, the client then grabs and pins down the foot while the dog struggles to get free. And after doling out the treat, he thinks he’s helped the dog enjoy the touch. Nope. It can be hard for anyone to grasp that the fastest way to make progress here is to slow the process waaaay down. Our dogs need to feel some sense of control in these situations. They need to have the option to disengage but choose not to, because the dread of the touch has been replaced by eager anticipation of the treat.

Huckleberry was already nervous in the car, but by rushing the process of making things better, I unwittingly made them worse. Over time we’ve found ways to manage the situation: She wears a seatbelt and sits up front with me so I can feed her treats as often as needed to keep her sane. She does ok. But she still frets.

What’s your take on why some dogs detest the car? With Huckleberry my guess is she never feels like she’s out of the woods. She scans constantly, looking for danger. As we drive, the scene keeps shifting. There’s a steady deluge of new threats to assess. The coast is never clear. 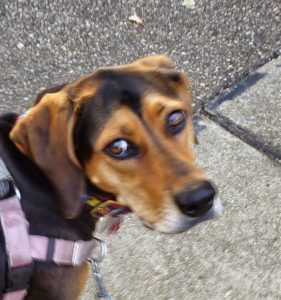 Last week I decided to go back to square one and do Counterconditioning and Desensitization 101 with my car-phobic dog. I grabbed my best treats, cajoled a very reluctant Huckleberry into the car, belted her in, and fed her as she shook. I didn’t even turn the car on. I let her eat a giant gob of cat food and a pile of roasted chicken. Then we got out and went back in the house. The next day, same thing, only I turned the engine on and let it run for a couple minutes while Huckleberry gorged on treats. Then, done for the day. Next time, same thing but I also backed out of the driveway, and then drove back in and let the car idle for a few minutes, feeding her constantly. In the past few days I’ve taken her for some quick spins around my neighborhood.

Truth be told, I know I’m still pushing too hard and going too fast. I’m not getting a CER–conditioned emotional response–of eagerness when we approach the car. Watch this video of Jean Donaldson conditioning a dog to a Gentle Leader for a great demo of a CER and the wonders of fast progress when you go slow. Huckleberry still shakes for a few moments when we get in. What do I always say in class? Back up a step and slow down. Don’t rush it. Work under threshold. Don’t magnify stress in the effort to shrink it. I need to take my own advice.

Do you have a story about socialization done right, or gone wrong? Share it with us!

To learn more about canine behavior, dog training and so much more, head to Tampa, Florida on November 11-13, 2015 for the Pet Professional Guild’s inaugural educational convention, the Force-Free Summit – Reaching for a Higher Standard: https://petprofessionalguild.com/Force-Free-Summit.