Cats in a Dog’s World 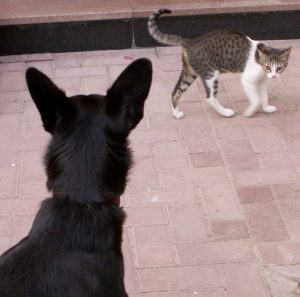 Cats often communicate through the use of the position and motion of the tail – this young cat is demonstrating her uncertainty in the presence of the dog (note piloerection). © Susan Nilson

Cats communicate in a variety of ways. Those of us who are most familiar with canines can often have difficulty differentiating the signals that cats send in attempts to communicate their intent. While many of us prefer to work with dogs, it is often the case that the canines with whom we work come from homes with a variety of pets, including cats. Therefore, it is advantageous for even “dog people” to understand feline communication.

Like dogs, cats will often communicate through the use of the position and motion of the tail. One excellent graphic that will help differentiate these signals can be found here. A friendly cat will generally hold his tail high. Depending on its exact position, one may be able to distinguish if the cat is indicating some hesitancy while still being friendly. However, when a cat’s tail is high and quivers, it would indicate that the cat is having a very positive experience. One exception to the friendly meaning of the tail held high is the high tail that is bristled. A bristled tail should serve as a warning sign of a cat that is NOT being friendly and could potentially be aggressive.

Communication indicating aggression tends to show in the cat’s downward pointing tail. Submission is indicated by putting the tail between the legs (as happens in canines). Finally, a tail that twitches signals an alertness on the part of the cat and interest in the item to which the cat is attending.

While all of these tail signals may give the watcher information regarding the cat’s state of mind, it is important to note that any animal’s tail signals may be misread. If a tail is physically oriented higher or lower than normal, that tail may appear differently during signaling. It is also the case that other factors will affect the reading of the tail including docking, or in the case of the Manx, little to no tail.

As such, there are other communication methods that the feline uses of which one must be aware. Eyes, whiskers, and even mouth posture can be cues regarding the cat’s state of mind. A cat that stretches its head into a forward orientation may be inviting the human or another animal to touch it. An aggressive (whether out of fear or defense) or submissive cat may raise its head. However, a cat will indicate that it is not a threat by lowering the head and turning it while also lowering the chin.

Cats that hold eye contact for an extended time are sending a message of aggression while a slow-blinking cat says that he is not a threat. Dilated pupils is an expression of fear, while narrow pupils can indicate aggression.

A cat’s ear position can also be a method of communication. Relaxed cats maintain an upright ear position, forward facing with a slight tilt to the back. The lower and flatter the cat’s ears are to the head, the more fearful and aggressive the cat may be. A mixed signal of one ear up and one down is basically an indication of being unsure. This cat is likely experiencing mixed emotions.

Whiskers can also give the observer clues. Relaxed cats will hold the whiskers to the side. An “interested” cat will bring them forward to detect prey and other items of interest. When a cat yawns it is indicating that it is not a threat.

Cats display a multitude of communication signals but the one key to understanding the motivation and mindset of a feline is to look at all of the signals available as a whole. Just looking at a tail position may provide some information, but may not give the full picture. Attending to the tail position in combination with the cat’s eye and ear signals will give the observer a far more accurate picture of a cat’s mindset. A cat that has one ear up and one down may indicate mixed “feelings” about a situation, but one may see that the cat is leaning toward aggression when noting the lowered tail. Conversely, when noting a mixed signal, the observer may see that the cat is blinking and attempting to show that it is not a threat.

Being aware of all of the ways in which animals communicate can allow an animal professional a greater understanding of the overall situation between animals in the home and will allow for a greater likelihood of success in any intervention.