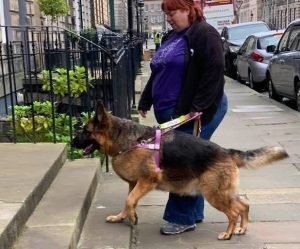 In honor of our canine companions, Animal Courses Direct are celebrating National Dog Day 2020 with some truly inspirational stories from some of our students. 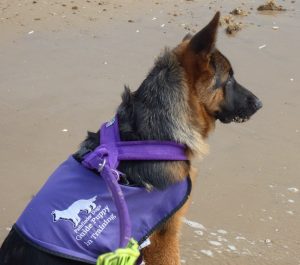 Anne, from London, is completely blind and so depends on her wonderful helper Karma to get around. Karma, the dog, is the perfect supportive companion, helping Anne with day-to-day life.

One day, Anne had to go into the city center to deliver some documents to a particular office. Karma did a valiant job guiding Anne on the London Underground (aka Tube), the bus and the streets leading to the office. When they arrived, Karma was able to find the right door so Anne could easily enter the building. She was told by a member of security that she would need to take the elevator.

“You need to use the lift over there,” he said, unaware that the use of phrase “over there” isn’t very clear when you are blind!

Nonetheless, Karma was able to find the elevator, pointing his nose in the direction of the button so Anne could easily locate and press it. They traveled up to the 28th floor, arriving at the office reception where Anne was able to hand in her documents.

Soon, it was time to leave and once again, Karma guided Anne towards the elevator to return to the ground floor and head home. Anne felt the elevator seemed to be taking a while to arrive, but dismissed the thought quickly and began thinking about the best route home via the Tube.

Finally, the elevator doors opened. Anne asked Karma to move forward, yet for some reason he stayed exactly where he was. Anne tried again, asking Karma to guide her in to the elevator, and yet again he refused.

Suddenly, a loud voice shouted over the office telecom, “Don’t move!” Shockingly, the elevator doors had opened, but there was no elevator to step in to, just an empty elevator shaft. By realizing the danger and refusing to move, Karma had saved Anne’s life! Security men soon arrived and comforted Anne, who was understandably shaken, but she will never forget the true hero of the day.

If you are interested in assistance training then our Animal Assisted Intervention Diploma Level 3 course might be perfect for you.

Surviving an Earthquake – Tremor to the Rescue 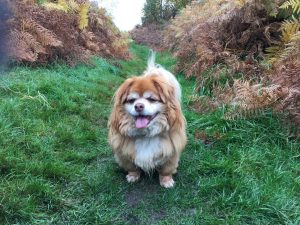 Tremor was rescued after an earthquake in Sichuan, China © Animal Courses Direct

Tremor was an aptly named crossbreed found near the source of the devastating Sichuan earthquake in China, 2008. He was first spotted trailing behind a group of local villagers who were coming down the mountain near An Xian, where many supporters and groups, such as the International Red Cross, aid local villagers.

After experiencing aftershock, the group decided to move back down the mountain and were soon followed by a little ginger dog.

It was at this point that he was first spotted by Judy, a volunteer from the International Red Cross support group. Realizing that he didn’t belong to anyone, Judy didn’t want to leave him on his own and agreed with the group of locals that she would take him back to the Animal Asia bear rescue center with her.

When Judy returned to the center the following year the dog remembered her! They spent a lot of time together, prompting Judy to name him Tremor.

Upon returning to the UK, Judy’s husband was able to write to the CEO of the bear rescue center and she kindly agreed to allow Tremor to travel to the U.K. for his new life. After many months in quarantine, he was finally allowed into the U.K. in November 2010 and lived with Judy ever since. 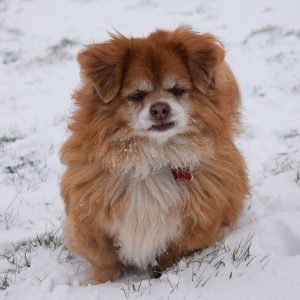 Tremor went on to bring joy to so many lives, going to work with Judy every day for 8 years! He even went on to become a therapy dog for a year and visited elderly people in a rest home once a week, putting smiles on people’s faces,  although Judy says, “he was more interested in licking cake crumbs off the carpet”.

Tremor sadly passed away last year, but in his memory, Judy will be taking some of his ashes back to China to scatter them in the bamboo forest where they loved to walk.

Interested in animal rescue? You may like to take a look at our Level 3 Principles of Animal Rescue course, taking you through rescue and care for animals in various disaster situations. 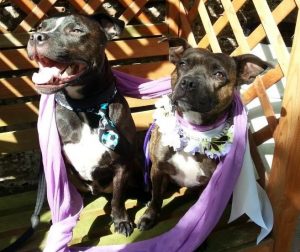 Cassie and Jack are both rescue dogs who first met in in 2012, at the Staffordshire Rescue Centre.

Both Cassie and Jack’s owners regularly met up for walks with both pups, ensuring they could still see each other. Not long after that, Cassie and Jack got married at Gretna Green, Scotland!

This was arranged by their guardians, doing it for a brilliant cause to raise awareness of this wonderful breed and to combat the bad press that Staffordshire bull terriers often, unfortunately, receive.

Cassie and Jack’s wedding received a lot of attention, it was even written about in national newspapers.

Cassie and Jack remain happily married, now celebrating 7 years since the ‘wedding’ organised by their owners. Here’s to many more!

About Animal Courses Direct
Animal Courses Direct is the largest organisation in the UK, offering Ofqual approved qualifications that meet government-regulated standards. They offer a comprehensive selection of accredited practical and online courses and have been improving animal welfare through education since 2005. They are approved and accredited by National Awarding Bodies: City & Guilds, Lantra, AIM Qualifications and Open College Network West Midlands and their Ofqual approved qualifications comply with Defra Animal Activity Licensing (AAL) Regulations.