The Challenges of Teenage Dogs

Dog owners are not always prepared for the challenges of a teen-aged dog: This can include their emotional response and sometimes over the top reaction to certain stimuli, ‘forgotten’ training, increased exercise requirements, need for more mental stimulation, ongoing socialization and training. 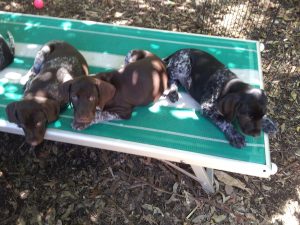 Many new dog owners will do a puppy pre-school and if the class is well run this will set them up to successfully navigate the first few months; house train their puppies, teach them to sleep in their designated area, get the first steps in training right, socialize properly to people, other dogs, places, surfaces, noises etc. It will also help them address normal but sometimes challenging puppy behaviors such as mouthing, exuberance, jumping, vocalizing.

Once that is done at around 13 to 15 weeks, unless they sign up for ongoing classes, owners often find themselves on their own and may be led to think the work is done! Not so unfortunately! In the same way that children need more than kindergarten to successfully grow up into responsible and well-adjusted adults, dogs need to further their education too.

To start with the young dogs may become ‘unemployed.’ For example, they might spend more and more time at home in backyard because they are perhaps too “boisterous” on walks or refuse to come back at the off leash dog park. They may also have gotten into a few altercations with other dogs. At this point they may become self-employed, meaning they dig up the backyard, eat the pool lights and bark at anything that moves. It is downhill from there.

Ignoring a dog’s education during adolescence can be fatal, mostly for the dog! Behavioral problems seem to be the number one reason for euthanasia of a dog of any age “it is still the largest cause of death of puppies under one year of age. Indeed, the average age of dogs in Australia, and world wide, is estimated to be around 3.5 years, which is well below their potential biological age.”

A large number of dogs are surrendered to shelters each year. One study puts the figure at a staggering 20 percent. The numbers of cats and dogs euthanized in Australia is an equally staggering 180,000 (of a total population of 22 million) and other countries are no better.

Anecdotal evidence suggests that dogs are most likely surrendered when they reach social maturity around 2 years of age and often earlier.

It is probably safe to assume that the brain of a teen-aged dog is ‘still under construction’ and that like in humans, part of the cortex mature at different rates. The more basic functions mature first where as the parts in the brain responsible for controlling impulse or planning mature later. Emotional responses, especially the urgency and intensity of the emotional reaction are affected during this time. Hormonal changes are another factor, even in neuter dogs. At the same time the brain is probably at its peak for learning.

The dog is also figuring out his place in your family and the wider community. This has nothing to do with pack. 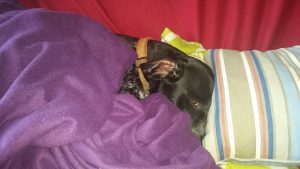 Do not take anything for granted at this point, this goes for house training, socialization or any form of training. Before you were the center of your dog’s universe but now the ‘big wide world’ becomes much more interesting, so do other dogs, the rabbits, smelly stuff on the ground, the soccer ball which is miles away or the passing motorbike (especially if you have a herding breed). He may have forgotten how to sit, let alone how to settle or just be relaxed at the coffee shop. And this happens even to well-trained dogs.

Socialization goes downhill very quickly, too. Often owners stop taking their young dogs out to new and different places around 6 months and the world becomes very small. The dog meets the same people and dogs over and over again, goes to the same places and stops interacting with new and unfamiliar people and dogs. What happens is that he ‘forgets’ how to deal with new things and people and might even start showing fear or aggression towards strangers (dogs or people) and this will affect his confidence, too. All of a sudden the previously happy outgoing dog becomes fearful. Most owners forget socialization is an ongoing process. (Note: the Second Fear Impact Period in a dog’s development occurs from adolescence/6-14 months of age). 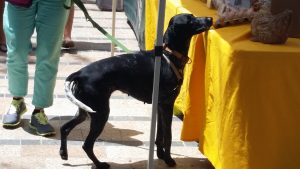 Tips when dealing with your teen-aged dog:

Keep socializing: While the critical socialization period is well and truly over you need to keep going. Young dogs need to go out and visit new places, people and dogs on an ongoing basis. At least once a week and make sure it is a positive experience, not just exposure.

Do a class for teenage dogs: This might just help you shorten the challenging time. A teenage class gives you and your dog support with all your questions, you and your dog meet new dogs and people, go to a new environment which is a great socialisation experience, too. Look for a qualified trainer who uses positive reinforcement methods only.

Make sure dogs get a lot of sleep and down time: Despite the seemingly endless energy, your dog still needs a lot of time to relax and just sleep. Consider going back to crate training if you have given up on it.

Choose your battles wisely: If your dog pushes the boundary a bit do not make a big deal of it. Agree on the rules in the house with your family and stick to them. If your dog is not allowed on the sofa, make sure all family members enforce it. If he is on the couch, calmly lure him off and ask him to go to his bed. Do not drag him off and make it a battle of wills. This will be a no-win situation. And if you are not prepared to enforce a cue: Don’t ask.

Sometimes good enough is good enough: If your dog makes an effort but does not get it quite right, reward the effort. Despite the bravado he is showing he needs a lot of tender loving care at this point in time because he is feeling pretty insecure.

Reward the good: Reward all the good things your dog does. You might find Kathy Sdao’s e-book Plenty in Life is Free helpful. Especially the part about 50 treats a day.

Let them make decisions if it is safe: Manage their environment better, especially at the off leash area. Make sure you match them with suitable play mates but get them out of there if you think it escalates. Even if they have a run in with another dog at the dog park, if no one got hurt, this does not mean your dog is aggressive. He just needs more socialization. If you are worried contact a force-free trainer.

Find outlets for his energy: Make sure you give them enough physical exercise but make sure you do not create an athlete. If you just increase exercise they will become fitter and fitter. Find a balance between physical and mental stimulation. 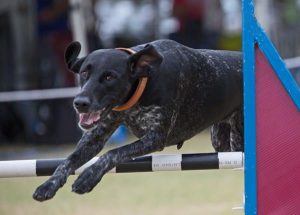 Look into a hobby like Agility. Picture L Hammer www.caninefunsports.com.au

Give him a job: It might be time to take up a dog sport. Look into Agility, Fly ball, Rally O or trick training.

Stop free feeding: Use a lot of his food for enrichment and feeding out of food dispensing toys.

And for how long? That depends, but often the most difficult part is over within a few months. After that you still might have the occasional relapse but hopefully it will not be as bad. Most important, stay connected, show him that you love him and train your dog!