Recently I persuaded a local pet supply store owner to sell me all his choke collars (at cost) and refrain from restocking them, in return for recommendations for safe body harnesses such as Perfect Fit and Balance. He was persuaded by data I presented to him about the pathology of choke collars.

“I never knew they hurt dogs, and only carried them because people asked for them.” 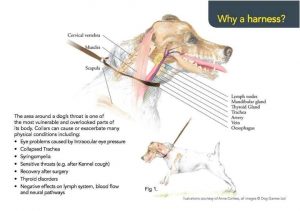 I never knew either, years ago when I went to a trainer seeking help with my Labrador, Jake.  She told me to use a choke collar. Neither Jake or I liked the choke collar, it never helped in any way, and I quickly put it away.

Pet owners cannot be expected to know about the harmful consequences of using equipment unless they are informed.

Years passed and I became an accredited force-free trainer with an understanding of the risks associated with using choke collars. A dog has seven cervical vertebrae in the neck, and several other critical structures. The vertebrae protect the delicate spinal cord carrying signals throughout the body.  Choke collars can cause a variety of injuries to dogs from head to tail.

In 1992 Anders Hallgren published a chiropractic study of 400 dogs thought to be healthy. According to an article by Dr. Jeannie Thomason and Dr. Erin O’Connor (American Council of Animal Naturopathy) 63% were found to have back anomalies.
Among those whose owners reported their dog overactive or aggressive, 78% had spinal anomalies or neck injuries.

Of the dogs with neck injuries “91% had experienced hard jerks on a leash or had strained against their leashes.”

Research in 2006 at the University of Wisconsin-Madison evaluated 26 dogs that pulled against a collar or harness. Intraocular pressure was measured showing no increase from baseline when a harness was used, but “pressure increased significantly when pressure was applied via a collar…” Drs. Pauli, Bentley, Diehl and Miller recommended “dogs with weak or thin corneas, glaucoma or conditions for which an increase in intraocular pressure could be harmful should wear a harness instead of a collar.”

Peter Dobias, DVM wrote about many dangers of neck collars in his blog.  The thyroid “gets severely traumatized” when a dog pulls on the leash, or if the human pulls. If the thyroid becomes inflamed the dog’s immune system tries to remove the affected thyroid cells, leading to hypothyroidism. Since thyroid function affects the metabolism of the entire body this leads to serious consequences.

Leash pulling “restricts the blood and lymphatic flow to and from the head” causing problems with vision and hearing. It also “impinges the nerves supplying the front legs” and can lead to abnormal sensation in the feet and chronic paw licking. 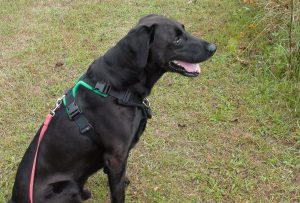 There are safe and secure alternative equipment to using shock, prong or choke collars.

With such clear evidence of the harm caused by choke collars it is sad so many dog trainers continue using outdated methods and equipment, failing to inform pet owners of the risks. Fortunately there are science-based experts leading the way to a safer future, such as Pet Professional Guild British Isles Position Statement on the Use of Choke and Prong Collars.

Some day my Labrador, Buddha, will no longer have to ask me…“Why do people choke their dogs?” 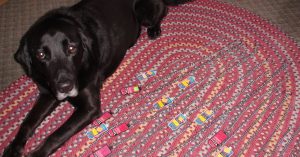