Christmas Puppy – What a Great Idea?

Do not get me wrong, I am not talking about giving someone a puppy for Christmas or buying a puppy on impulse.

I am talking about a long awaited puppy who, for no other reason but the mother coming into season at a certain time, comes home for Christmas. 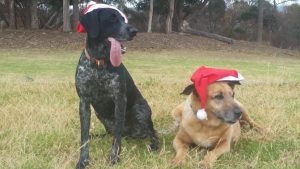 Or a family deciding to bring a new rescue dog home at this time of the year because they have time to settle him in. Christmas is the time when everyone is very social and off work so by definition it should be a great time to get a puppy or a rescue dog.

If you get a rescue dog, try to give him a few days (depending on the dog) to settle in at home and get used to the new environment and family members. While we are well and truly past the critical socialization period, we can still do a lot to make them feel comfortable.  Get him used to the routine in the new household by creating a lot of positive associations. Do not rush to the dog park! The dog needs to settle in with you and if he is not well socialized with other dogs rushing to the off leash area is not a good idea. Once he feels comfortable at home, take him out for short walks, keeping a close eye on what might scare him. Take a lot of treats with you so you can associate scary stimuli with something positive. If your dog stops taking treats this is a clear indication that he is over threshold and you might want to back off.

Shellbe our German Shorthaired Pointer was a Christmas puppy, arriving at our home a couple of weeks before Christmas, coming from a breeder who had already done a lot of socialization with her and her litter mates. We were off work and had a lot of time to play and socialize.

Socialization at a basic level is respondent conditioning – creating an association between two stimuli, in the case of puppy socialization hopefully a positive one.

For me socialization is the process when the puppy learns how to navigate and behave in a world that is not made for dogs! It means developing canine coping skills that work in 2016 and beyond.

Even 20 to 30 years ago, socialization was less of a topic for trainers and owners, not because puppies did not need it, but for the most part they did it themselves. It was still common for dogs to wander the neighborhood, hang out with other dogs, go through the garbage bins, get into the odd altercation with other dogs or get hit by a car. It was no big deal and not a big problem. I do not glorify these times, all I am saying is that things have changed and socialization is paramount for puppies.

We have to socialize to different kind of humans, moving objects, other puppies, dogs, animals, surfaces, sounds, environments etc in a positive way. Here a check list.  This process has to happen at the puppy’s pace and the puppy needs to be able to make a choice. If the puppy backs off and needs more space and time, it is the puppy’s choice. It also has to have a positive outcome. Exposure alone is not enough neither is habituation! The assumption that puppies learn to interact appropriately with other dogs by being in the litter with their siblings is plain wrong. Puppies will learn bite inhibition, stalking, playing, rumbling etc but they all look the same and are the same size. This process is habituation and is only a part of socialization. They also need to learn to interact with puppies of different looks and temperaments. That only happens when playing with unknown puppies before the critical socialization window closes.

We had the advantage of living in an area with a high vaccination rate and no diagnosed case of Parvovirus in a very long time. There is always a certain risk of disease but in our case it was low compared to the fallout of inappropriate socialization. We obviously also avoided dog parks and other areas with unfamiliar dogs. But we did a lot of other things. If you live in an area where there is a higher risk you will have to stick to safe places.

Organize a couple of puppy parties: one with neighbors to come and play with the new puppy, one for friends and one for the extended family. Do not scare the puppy and it is better to have a few people over more often than one big party. We had more of a social life ourselves, too.

Take the puppy to the coffee shop to experience what a lot of people do these days with their dogs, at least in our coffee society in Sydney. If necessary keep the puppy on your lap.

Sit in front of the local emergency department, where the puppy sees crutches, wheel chairs, hears helicopters and ambulances all while feeding her breakfast. Pair each interaction with something positive (food, toys, play….).

Start leaving the puppy alone for very short periods of times and start crate training during the night.

Getting Used to Water

Take her for short walks in safe places with different surfaces. Cover easy things like grass, roads, dirt and sand first and only gradually introducing stairs, grades, water or bridges. A lot can be done in your or your friends’ backyard.

Get them used to the sounds of the household (if not already done by the breeder), power and garden tools, cars, trucks, planes. There are a CDs and apps out there to help with that.

Enroll in one or more good puppy classes. Most trainers will enroll in more than on puppy class because they know there is only a very short time for socialization. The puppy class is often the only place where the puppy can play with puppies of a similar age. A puppy pre school without carefully supervised puppy play is a lost opportunity.

A good puppy class provides information on the usual, but for novice puppy owners often unexpected, challenges like house training, bite inhibition, sleeping at night, appropriate interaction and proper socialization. It shows the owner how to teach the puppies using positive reinforcement methods only.

A word on making the puppy sleep in the laundry or any other isolated place: I do not recommend doing this. The puppy has just left her mother, her siblings and everything else she knew. She needs to learn to be on her own but will not cope with isolation. Isolating a puppy at that age can create separation issues later. Crate train the pup and keep her with you for the first few weeks. In time the puppy will learn to be on her own.

And no you cannot socialize your puppy later. Once she is past her critical socialization period (depending on the pup after 12 to 16 weeks) you have missed it for good.

I do not think you can ‘over socialize’ a puppy if done properly. But if you do not work at the individual puppy’s pace and confidence levels you might scare her. To scare a puppy during the critical socialization period can have life long effects and potentially create a fearful dog.

Most of all have fun with your new family member and a very Merry Christmas.

Do not buy a puppy on impulse and if you do not want the dog don’t get the puppy! 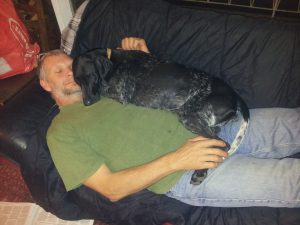