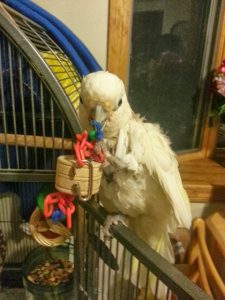 Star, a 7-year-old Goffin cockatoo was surrendered due to plucking behavior. He spent several months in a behavioral foster home before being successfully adopted into his forever family © Sheila Blanchette

I have volunteered at several local brick-and-mortar rescues (private shelters) in my area (north of Boston, Massachusetts) and have seen, over time, companion birds being returned because of the same behavioral issues.

Adopters may say that a bird was “not trainable” or “would not bond” with them. Now, the rescue’s policy is to improve the welfare of the companion bird by getting him into a good and knowledgeable home. This strategy may reduce the undesired behavior. However, some rescues avoid placing birds in foster homes because, if returned, the upheaval of moving him from one home to another would cause him more stress, which could, in turn, cause an increase of the undesirable behavior.

In spite of this, I still saw birds being returned and then adopted back out with the same behavior issue.