Confession of a Professional Dog Trainer

My name is Daniel H. Antolec. I am a professional certified force-free trainer…and I own a shock collar.

Not only do I own a shock collar, but it is among my most prized possessions and is proudly displayed in my library of 45 books and 25 DVDs on training and behavior.

You see, once upon a time I met a little dog named Pete and his owner, Penelope. I changed their names for this blog but the story is factual.

Pete was six weeks old when Penelope obtained him. He resisted handling even then and tended to bite incoming hands and attempts to restrain him. At 9 years of age he had plenty of practice in defensive responses.

An elderly retired lady on fixed income who lived alone, Penelope wanted Pete to spend his final years in the comfort of her loving home, but a problem developed that threatened her expectations…and his life.

Pete required grooming every three months and Penelope went to several groomers who subsequently refused to work with him because he nipped at them. The current groomer was bitten and expressed her fear, admonishing Penelope she should euthanize her “vicious” dog. I was familiar with the groomer and knew she used rough restraint and ignored stress responses of dogs in her custody.

Upon taking Pete to a veterinarian for a routine exam the veterinarian and technician restrained Pete so roughly that he urinated and defecated on the table. Compounding advice of the groomer, the veterinarian declared Pete was “aggressive” and prescribed a daily sedative.

Penelope sought advice from friends and neighbors who told her to put a shock collar on Pete and punish his behavior. Considering all the advice she had been given, she continued medicating Pete and shocked him whenever he did something she disapproved of.

She never trained Pete but wanted him with her while she did gardening, but Pete barked at the UPS truck and chased it down the street. SHOCK! When Penelope ran after Pete and finally caught up to him she grabbed his collar, scolded him and slapped him on the butt. Pete learned to aggress toward the UPS delivery man and his behavior worsened.

Before long Pete bit Penelope whenever she reached for him, tried to pick him up to place him in the bathtub or her vehicle, and would not let her reach for any toy he was playing with. Pete learned human hands and restraint were unsafe so he protected himself.

Penelope was convinced Pete’s biting worsened since she began his medication, and that using the shock collar compounded the behavior. She determined to remove the collar but was unable to do so and had the scars to prove it. Penelope was at her wits end and reluctantly considered euthanizing her best friend.

That was when I met Pete and Penelope.

My first session focused on removing the shock collar. Penelope casually waved the remote control in the air declaring “I don’t even know if this thing works” and I quickly took it from her. The setting was on maximum and the batteries were functional. The last thing I needed was for Pete to associate me with pain and shock if Penelope pushed the button.

After 90 minutes and one frightened nip I was able to unclip the shock collar. It fell harmlessly to the floor and I discussed with Penelope the long road ahead.

This included training Pete in basic skills so Penelope had force-free ways to influence his behavior, reconsidering the medication, finding an alternative (force-free) groomer and veterinarian, desensitizing and counter-conditioning Pete to stimuli currently eliciting defensive-aggressive responses, and educating Penelope to change her own patterns of behavior.

Eight sessions later we accomplished our goals. Penelope learned new ways to engage with Pete and he learned that he could trust his owner to keep him safe. For my fee, I only requested that I retain ownership of the shock collar. 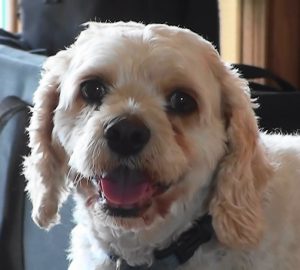 I confess…that shock collar is among my most prized possessions, and a little dog named Pete was given the opportunity to spend his elder years in the comfort and love of his owner.

When we know better, we can do better.