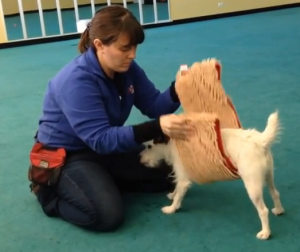 Having worked on targeting Cali to stand over the towel, we then started to bring it up to her sides

Meet Cali, the Jack Russell Terrier. Cali is a client’s dog, who came to us for training after she bit three different people in less then a month. She was approximately 18 months when she started training with us. We were her “last hope” to keep her alive.

Cali’s initial training started at 10 weeks old, with a different trainer. The trainer was called in because she was guarding her food bowl from the family. This trainer worked with Cali for about a year. Continually punishing her more and more severely for any “aggression”. Her aggression (fear) issues grew beyond food guarding to space guarding and fear (shown through aggression) when being touched.

One of many things that we have worked on with Cali is to start tolerating touch and grooming. As winter was nearing in Chicago the family wanted to be able to towel dry Cali. This is one behavior that has always produced some level of aggression from Cali. The level depends on who is towel drying her. It can be a low growl all the way to a bite.

We started with getting a super absorbent towel. That way we could do minimal drying and still be effective. We wanted Cali to have the choice to participate in drying. At any moment she can leave and she has to choice to come back or not.

Over the years of working with dogs with restraint issues I have learned the fastest way to move forward in training is giving them a choice to be there or not. What we have seen over the last few months with Cali is when she does get stressed and leave is she comes back faster and happily. She knows she has a choice and now her choice is usually more training.

Here’s the video of her being towel dried. 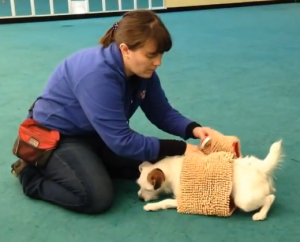 First, we taught Cali how to stand over her new “special” towel. We shaped her to target her front legs on one side and her back legs on the other side. We spent a week or two just working on that behavior and adding duration to her standing there. Then we started bringing the towel up on the sides. We started with one side at a time and not touching her body. Then we progressed to both sides of her body, but not touching her. In the video you will see the first time we worked on touching her body.

You will see her stiffen, because she is stressed. She can leave out the back and she had before when we were working on raising the sides. She chooses to stay! I work on ending it before she is too worried. Then we tried a different technique, of her laying down on the towel and wrapping the towel around her. When she first started training with us she would not lay down at our facility due to stress. Now she is laying down and letting us wrap her in towel!

I love silly cues for behaviors, to remind us that this is all fun and games. So Cali’s towel drying and wrapping is called The Cali Burrito.

To learn more about working with reactive dogs and so much more, head to Tampa, Florida on November 11-13, 2015 for the Pet Professional Guild’s inaugural educational convention, the Force-Free Summit – Reaching for a Higher Standard.