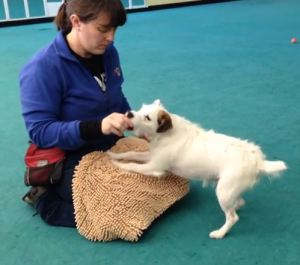 Once we had shaped Cali to accept the towel, we had to train her to tolerate having her paws wiped

We introduced you to Cali the Jack Russell Terrier, one of our great clients, in a previous post. Cali is a true testament to the power of positive training and the resilient nature of dogs.

We have worked in a variety of ways to be able to dry Cali where she feels safe. We have empowered her to have a choice in being in the situation or not. She can leave any time she wants during training.

In our previous video we showed how we trained Cali to accept having the towel around her body. That only covers so much. So with winter and mud season just around the corner we also wanted to get Cali comfortable having her feet wiped. 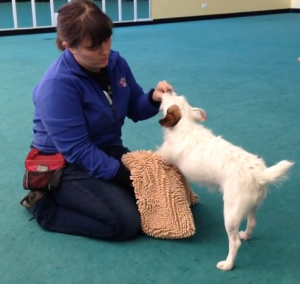 Prior to positive reinforcement training, Cali not like to be touched and would often become aggressive

First we started with the special absorbent towel on our lap. The towel on the lap became the cue to stand on the towel on our lap. Once there we shaped her wiping her feet down the lap. She was wiping her own feet! Then we added wrapping the towel around her paws and having her “pull” her foot out. We took the natural instinct to pull away and clicked it. You should have seen how shocked she was being rewarded for pulling away. Now she is wiping her whole foot and leg!

At one point in training I was holding the towel up like a rainbow and she started to stick her head under it. Click and treat and a new idea born! We have also shaped her to go “under” the towel so you can wipe her face and back if need be. Also with this behavior we clicked her leaving the towel, because it produced a wiping motion. Again shock that “leaving” could earn her rewards. Not that she left, since now it was part of the training game.

So another Cali video. This time we are working on paw wiping and drying.

To learn more about working with reactive dogs and so much more, head to Tampa, Florida on November 11-13, 2015 for the Pet Professional Guild’s inaugural educational convention, the Force-Free Summit – Reaching for a Higher Standard.