Let’s face it, humans are “trained” to correct other humans. We correct our spouses, our children, our co-workers and so it isn’t a stretch that this thinking spills over into dog training. We wait for something to go wrong or for someone to do something wrong so we can then correct it. The reality is corrections evoke fear and erode trust. I certainly wouldn’t want this man in my face, would you? Why are animals subjected to this type of body language?

The word itself is offputting. When it comes to corrections and animals, the reality is  a “correction” isn’t teaching the dog anything except that we can hurt or scare them without warning. Corrections aren’t teaching a dog what TO DO, but what NOT TO DO.

Still many would question, “why wouldn’t you correct?” Maybe there are even family members who aren’t able to wrap their mind around why you wouldn’t correct a behavior. There are many reasons. Corrections with animals are not the same as with humans who can be reasoned with, and a correction can only be done with anger behind it.  What is natural and normal behavior for an animal might be bad behavior in a human world. An example would be, dog is chewing seat belts in vehicle. The human solution might be to get angry and to “correct” by yelling, slapping dog, pulling them out of the vehicle, stomping around, fuming when the reason behind this is either the dog is youthful, teething, anxious, stressed, has separation panics or other of which correcting simply destroys any teaching moment and trust. The dog will simply continue chewing when the aversive motivator, the human, goes away. What they learned in that angry moment was the vehicle is not safe to be in when the human is present. This could escalate into redirecting behavior onto another dog in the vehicle, growling or snapping when the human comes into the vehicle and taking the joy out of the meaning of a “ride”.

A recent study says, prior to seeking the counsel of a veterinary behaviorist many dog owners have attempted behavior modification techniques suggested by a variety of sources. Recommendations often include aversive training techniques which may provoke fearful or defensively aggressive behavior. Several confrontational methods such as “hit or kick dog for undesirable behavior” (43%), “growl at dog” (41%), “physically force the release of an item from a dog’s mouth” (39%), “alpha roll” (31%), “stare at or stare [dog] down” (30%), “dominance down” (29%), and “grab dog by jowls and shake” (26%) elicited an aggressive response from at least a quarter of the dogs on which they were attempted. Confrontational methods applied by dog owners before their pets were presented for a behavior consultation were associated with aggressive responses in many cases. *1 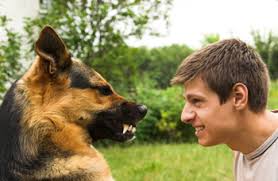 When one is rewarded for a job well done, it changes outlook. Rewarding what the dog is doing right changes attitude, responsiveness toward the human and demeanor or body language.

The paradigm shift starts when one is asked to leave behind years of correcting and  instead start rewarding the right behavior. Teach the dog what TO DO. Seems simple. Still, people seem to need to know what to do “if the pup or dog gets out of hand.” So the question becomes, ironically, how do I correct my dog using positive, force free methods? Seems an oxymoron to those who know better, but to one learning a gentler transition, like a client or a cross-over trainer, this might be the solution to a complete paradigm shift.

The thinking sticks if the dog does something bad, they then need to be corrected. Why can’t people just let this train of thought go? If I say to a client, “my dogs do not even know the word “no”, eyes glaze over. They wonder then how I “correct” bad behavior or do my dogs run wild and free. 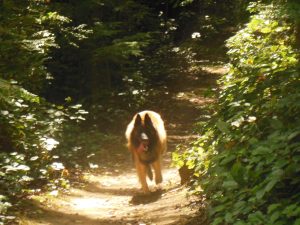 My Valor coming when called on forest trail

People have preconceived perceptions, such as the myth that “mother dogs correct their pups” or “wolves alpha roll other wolves”. Just saying we are not dogs, doesn’t seem to be effective for explanation.

“A wolf would flip another wolf against his will ONLY if he were planning to kill it. Can you imagine what a forced alpha roll does to the psyche of our dogs?” – Dr Ian Dunbar

What about mother dogs and correcting their puppies? An adult dog will issue a correction one time to a pup who’s reached the age of about four months, to indicate, “Don’t do that any more,” or “Don’t pester me by climbing on my face.” The adult dog is teaching the youngster doggy manners to get along well in canine society.

What would a breeder say? Breeders work with puppies and bitches all the time.

As someone who has bred over 20 litters, personally, have helped many friends with their litters, I am still looking for the ‘mythical mother correcting their behavior, by grabbing them by the neck or muzzle’. I would actually think a bitch that did that ‘correction’ often is unsound bitch for breeding. What bitches do is move away, air snap, give gentle growls but FIRST and foremost they are very, very tolerant.” Kim Campbell, Canada, breeder of Bichon Frise

Firstly, we are not the dog’s mother. Secondly, we want a different relationship with the dog. We want a more long-term reliable non-feral relationship. If a puppy were to grow up with the mom, it will eventually challenge the mom and why would we want them to do that with us? Normally a mom is very tolerant of pups. They will growl at the pups as they get older and if pup does not respond to growling, the mom will snap at pup. I have never seen a mom grab and shake a pup, ever. I have never seen a mom alpha roll a pup. I have seen pups roll submissively, but not a mom rolling the pup. Different bitches have different tolerance levels too, some are a little faster to snap than others. Natalie Vivian, Canada, breeder of Belgian Tervurens and Groenendaels 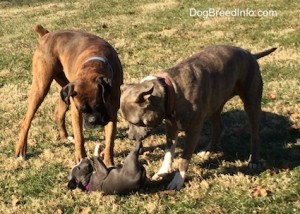 Puppy chooses to roll on back

Key words here are canine society. Getting along in human society is entirely different. Imagine moving to a foreign culture. The language is unknown. Would we wish a native speaker to teach us how to get along in Italy positively or punish us every time we made a mistake?

So what to do?

How to tip the scales and teach people to reward what the dog is doing RIGHT and not to worry so much about what Fido is doing WRONG? The best way is to “show” what it means to reward good behavior versus punish bad behavior and to use a gentle guideline of one or all of 3Rs – redirect, remove, relax, as a disciplinary process. I find if I can solidify the concept of the 3Rs for people, they start to get it. To have a set of something they can do just in case. since they feel they need to have some discipline in place it makes sense to keep it force free – Redirect, Remove, Relax – use one or any combination. Redirect means to postively interrupt the behavior, and teach cues that are highly rewarded. Remove equals the dog or yourself, removal of rewards, and social is often very meaningful to a dog. Just step away for a moment, release pressure. Relax, meaning the dog may have had too much in the way of duration, or too little distance between them and a trigger and needs a processing time. A rule to remember is always end on success. The 3Rs are never confrontational. Even the 3Rs aren’t needed, if rewarding behavior that is WANTED and teaching what TO DO is employed. There won’t be a need for bad behaviors. If they ARE seen, then asking yourself, “what behavior do I want instead” and then training it out in baby steps is preferable to confrontational corrections.

There are many ways to relay what it means to reward good behavior: 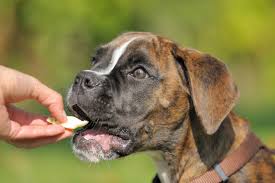 Reward dog for what they are doing RIGHT

Seeing how well force free works with animals of all types, it is very hard to stand back anymore and watch a person push on a dog’s hindquarters to get them to sit, or jerk a leash, or see someone slap their dog or talk harshly to them or shout NO! several times. These tactics are not needed and one can only hope the word “correction” disappears from the thought process when we are talking about animals and is replaced with “just say YES”.

Dogs: Positive Reinforcement Training: Just say Yes to training your dog with treats and praise The Humane Society of the United States