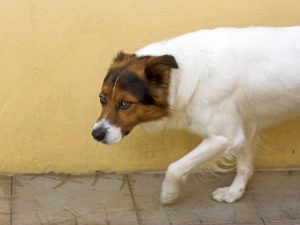 The notions that dogs are seeking to “dominate” humans or gain rank on them have been firmly debunked by the science community. Photo (c) CanStock Photo

Some pet dog trainers that are either using aversive methods or some that call themselves “balanced”, and use a combination of both aversive approaches and food rewards, may carry the notion that positive reward based trainers are against them personally, or that are looking to have them stop training dogs.

While I can only speak for myself, it is not personal at all. What it boils down to for me, and many others, is the potential fallouts of using shock or choke, and/or physically reprimanding a dog that has me and other at odds with training via fear and pain. Once trainers who use such methods stop the aversive approaches, why would anyone want them to stop training dogs? After all there are lots of dogs that need help.

The other aspect of pet dog training that has many +R trainers agitated is the continuing false notions that dogs are “dominating” humans or looking to “gain rank” on humans when they resist or are not as compliant as humans would like.

David L. Mech, who was one of the proponents of the “dominance” theory, came out quite a few years ago and said he and his research team got it wrong.

Ray Coppinger has said many times in interviews that dogs are not “pack” animals like elephants are. Sure, dogs pack up for procreation, prey acquisition, and play, but dogs are not classified as pack animals, they are social animals, as most animals are.

It is these two-misguided notions, 1 – that fear and pain is needed to “train” and 2 – that dogs are “dominating” humans when resistant, that keep causing humans to imprint behavior issues such as increased fear and aggression, and have an adversarial relationship with dogs. It bears repeating dog’s at social maturity have the cognition of a three-year-old child, for life.

What many positive trainers are have issues with, in my opinion, is the aversive approach and the falsehoods of dominance theory. If trainers using aversive methods traded in their approaches and domi-nonsense assessments of dogs, +R trainers would most likely have a more open and inviting attitude. Until then,  expect some form of division. This is for me, and others, purely about what is best for dogs, not just a difference in methodology. While I know that there will always be people that use aversive methods, professionals and dog guardians alike, and there will always be people that view dogs as “stubborn” and “dominant”, we can make great headway in changing the culture if we can get mandatory educational requirements for veterinarians.

Where the war will be won is with the veterinarians and the veterinary behaviorists. It is these two camps that can and should be turning on the pressure for a force free pet dog training industry.

As is widely known, veterinarians do not obtain any behavior or dog training education while in vet school. This must change.

Here are some alternatives to having behaviorists on the faculty, though that would be a welcomed addition.

• As veterinarians attend school for 4 years, that is more than enough time to have a visiting behaviorist or two teach a 6 – 8 week course in the third and fourth years of the veterinarians education.
• There are a few distance courses that should be required, and I am almost positive that there could even be an expedited crash course with one these courses, as some require a 2-year commitment.
• Dr. Susan Friedman’s course Living and Learning with Animals should be a required course for all veterinarians.
• Vet Techs should also be required to attend a distance course and the Freidman course as Vet Techs do lots of hands on work with dogs.
• The American Veterinary Society of Animal Behavior has some great literature and the late Sophie Yin published a fantastic book and DVD on reducing stress at vet visits. This should be required reading for all veterinarians in school.

Furthermore, all shelter and rescue workers, and groomers, regardless of what they do at the shelter, rescue or grooming salon, should also be required to have some level of education in training and behavior, such as that offered by the Pet Professional Accreditation Board. Why? Because the more people know about behavior and legitimate training the better the population of dogs will do, the better understood dogs will be, and there will be less stress.

Once the community is more informed about what is risky and what is a safer approach, I am confident the vast majority of people will understand and make the changes necessary.

The need for all of us in the dog training and dog care community to be “on the same page” is crucial for dogs and their humans, so there is a standard, a common language and universal legitimate understanding of dogs based in behavioral science and the principals of Applied Behavioral Analysis (ABA).

The talent and the experts are already here, and all it takes is for someone at the top of the heap, such as the veterinary behaviorists and vets that are in the know, to make the push for comprehensive education for vets, for dog trainers, for shelter workers et al. The time is now to make that push and have a sea change in the culture of pet dog training, because the abuses passed off as training have gone on long enough, while the false notions of “dominance” have permeated and infected the thinking in even some of the most well-educated.

The only thing that will occur once people working with dogs are required to obtain a legitimate education in behavior and non-punitive methods, is that dogs and consumers will be better served, vets will be even more equipped to do their jobs and refer to legitimate dog trainers with safer training and more accurate knowledge about dogs. After all, is that not the point of why anyone decides to get involved with dogs, to help them and understand them better?