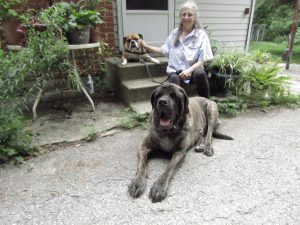 Regine with her dogs Quincy (left) and Kyrie (front).

Tell us a little bit about yourself. How did you first get into animal behavior and training, and what are you doing now?

I have a Bachelor of Science degree from the University of Guelph, and animal behavior has always been of special interest to me. I started out just training my own dogs. Sadly, my first two dogs were trained with choke chains (there was nothing else around, and I didn’t know any better), but in the late 1980s, I was introduced to Ian Dunbar and then Karen Pryor seminars. The lights went on and I was hooked, both to do better by my animals and to keep learning. I started my own training facility in 1990, introducing positive training to my small corner of the world, and haven’t looked back. I work with puppies, rescues and dogs with behavioral issues.

Tell us a little bit about your own pets.

Right now, I have two “octogenarian” starlings (babies that fell out of their nests 11 and 12 years ago), as well as two middle- to late-aged dogs. The starlings are great mimics of both words (watch what you say) and sounds (was that the telephone or the birds?). Quincy is a rescue dog who weighs 63 pounds—he appears to have bulldog in him. He was about 2 years old when I got him, and he had many, many behavioral issues. He has been great to work with to both teach others and for me to learn even more about training. Valkyrie (Kyrie) is an English mastiff who weighs 173 pounds. I first saw her when she was 9 days old, and I brought her home at 9 weeks of age. She turned 9 years old in July 2022. Kyrie has been “Miss Almost Perfect” since the day I brought her home, but, unfortunately, that is partially due to her many health issues—she had two tibial plateau leveling osteotomy (TPLO) surgeries before age 4, and now she has spondylosis plus other more minor issues. She was a St. John Ambulance therapy dog until her second TPLO surgery, when we had to withdraw from the program.

What do you consider to be your area of expertise?

Why did you become a dog trainer?

I love animals and really enjoyed working with my own dogs, and I wanted to help other people who were having problems with their pets. I am also a perpetual student and love learning and keeping up with all the latest information. In the beginning, I also wanted to show people there was a better, kinder way to get better results with their dogs.

Are you a crossover trainer, or have you always been a force-free trainer?

I am a crossover trainer. My previous dog, Amber, a Doberman, had been shown in conformation by her breeder. I wanted to show her in obedience trialing, too, but I caused her to become a “problem dog” from using force-based methods. I could not get rid of her jumping up behavior, no matter how much force I used. I never did like using force (can’t use it on budgies) and, as I mentioned, when I attended my first Ian Dunbar seminar, the lights came on.

What drives you to be a force-free professional, and why is it important to you?

I saw the difference that force-free and positive training techniques made to my Amber. As soon as I learned clicker training from Karen Pryor, I made quick and huge strides in turning Amber back into the sweet, friendly dog she had started out as, and I got rid of her jumping up behavior in no time. I want all animals to experience this way of life … it is in keeping with how I want to be treated and how I treat others, and animals deserve the same.

What awards or competition placements have you and your dogs achieved using force-free methods?

I do not do any competitions with my dogs. I am not a competitive person, and don’t like any kind of sports (human or canine).

Who has most influenced your career and how?

Many people have, but it all started with Ian Dunbar and Karen Pryor all those years ago. Just learning about different methods that suited my personality and philosophy and that worked amazingly well was mind blowing, but also learning about dog/animal cognition and behavior is my thrill in life.

How has the PPG helped you to become a more complete trainer?

The amount of information available, the webinars offered and just being part of a like-minded organization makes me feel more empowered.

What are some of your favorite positive reinforcement techniques for the most commonly encountered client-dog problems?

“Find it” and giving choice do so much, it is unbelievable. Those are my first go-to’s … having fun and teaching a dog to become more thoughtful.

What is the reward you get out of a day’s training with people and their dogs?

To see the humans become more relaxed about their dog’s behavior, and giving them hope that they do not have Cujo in their home and that their dog is not hopelessly stupid. And on the dog’s side, watching dogs become engaged and start learning, and getting happy about it.

What is your favorite part of your job?

What is the funniest or craziest situation you have been in with a pet and their owner?

Just recently, I was working with a schnauzer on choice. She liked to jump up on people to get what she wanted. After a few minutes of teaching her that the only way for her to get the reward was by lying down (she offered this behavior—I did not ask for it), she became very conflicted. It was hilarious watching her trying to decide between jumping up and lying down. She spent several seconds starting to jump up then changing her mind and starting to lie down then changing her mind and starting to jump up, and so on, until finally she chose lying down and was well rewarded for her efforts.

What advice would you give to a new trainer starting out?

Learn the science and make sure you have lots of empathy for both dogs and humans. And remember, we all make mistakes. We are only human and canine, after all.