Declawing Can Cause Behavioral and Emotional Changes in Cats 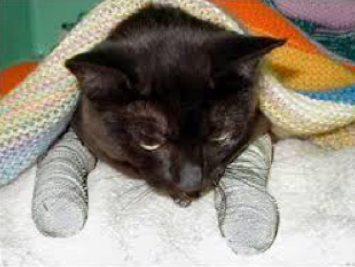 Declawing cats for non-medical reasons is banned in at least 22 countries but remains legal in much of the US.

Take a moment and look at the world through a cat’s eyes. He is removed from his safe, warm, and familiar home and taken to the veterinarian’s office where he gets poked with a needle. When he awakens from general anesthesia his paws are throbbing in pain. For the next 2-3 weeks his paws will be so sore and tender that his ability to walk, climb, and jump may be drastically compromised. He may also begin associating the pain he suffers while scratching in his litter box to the litter box itself, causing him to use the box erratically out of fear and distress.

Declawing (aka onychectomy) is series of bone amputations. In humans, fingernails grow from the skin, but in cats, who use their claws for hunting prey, the claws grow from bone. For that reason, the last bone of each toe of a cat’s paw is amputated so the claw cannot regrow. In the process, the tendons, nerves, and ligaments that enable normal function and movement of the paw are severed. This procedure is equivalent to humans having their fingers cut off at the top joint.(1)

Retired Denver veterinarian Dr. Aubrey Lavizzo is a 1970 graduate of the Tuskegee University School of Veterinary Medicine and the director of Paw Project Colorado. He is active in community and professional organizations and veterinary education. Dr. Lavizzo, who is leading the effort to make the procedure illegal in Colorado, says, “They should call it ‘de-toeing’ because that’s really what it is – an amputation of the third phalanx.”(2) According to Dr. Lavizzo, who like many veterinarians has performed declawing procedures at the request of cat guardians, “As veterinarians, we take an oath that we will use our knowledge and skills to benefit society through the relief of pain in our animal clients. When you talk about pain in cats, it’s classified as mild, moderate, and severe. Mild is a neuter. Moderate is a spay. And severe is a declaw.”(2) Since the majority of cat guardians believe declawing is a harmless, acceptable procedure, opinions like Dr. Lavizzo’s are often not well received. It’s estimated that 31% of cats in the United States are declawed.(3) According to a 2011 Associated Press poll, nearly 60% of American pet owners, including 55 percent of cat guardians, believe it is okay to have a cat declawed.(4) 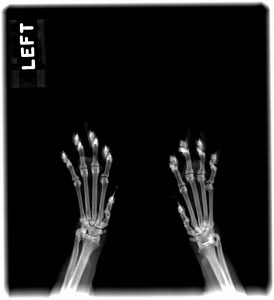 Cats’ claws grow from bone not skin; the last bone of each toe of a cat’s paw is thus amputated during declawing so the claw cannot regrow. Photo © Can Stock Photo

It is estimated that the vast majority (80 percent) of declawed cats have at least one complication resulting from surgery, and over a third develop behavior problems after undergoing the procedure.(2,5) This is according to Dr. Jean Hofve, DVM, who has over 20 years of experience in conventional and alternative veterinary medicine. She is also the author of The Complete Guide to Holistic Cat Care: An Illustrated Handbook.(5,6) You can listen to an interview of Dr. Hofve conducted by Dr. Karen Becker, an integrative wellness veterinarian, that goes into depth about declawing and its ramifications here.

After declawing, behaviors such as biting and urinating outside the litter box are often pain related. Dr. Craig Tebeau, a 1996 graduate of the University of Minnesota College of Veterinary Medicine, director of the Washington Paw Project, and owner of The Cat Doctor Veterinary Clinic in Federal Way, Washington, states, “Declawed cats are almost universally more likely to bite. They are less trusting about being handled; they are prone to inappropriate elimination disorders; and 100% of them develop joint problems as they age.” In addition, the procedure changes a cat’s ability to walk naturally. Cats carry 60 percent of their body weight on their front feet. If the front paws are injured, even temporarily, it can create compensatory injuries to the wrists, elbows, shoulders, and spine. Declawed cats continually shift their weight backwards, which can lead to collapse of the wrists and can cause them to end up walking on their ankles or wrists, which is painful.

A common occurrence in declawing procedures is that a small piece of bone is left behind that can subsequently grow back as a partial nail or bone fragment. The piece of bone can continue to grow either under the skin, pressing into tissue and nerves, or right through the skin.(2,5) This can create problems as much as 15 years later and cause significant pain. Another problem is created when the tendons contract after being severed in the declawing procedure, which pulls the cat’s toes back. This changes the angle at which the foot connects with the ground, which can cause severe pain.(5)

Dr. Lavizzo is conducting a study of declawed cats to record bone fragments and bone spurs left behind in the declawing procedure. He believes the pain caused by those missed bone fragments may result in behavior changes like biting and eliminating outside the litter box. “We always see the same thing, because it’s so hard to do this procedure perfectly,” Dr. Lavizzo said. “You can’t predict a successful outcome, and if you can’t predict a successful outcome, then you shouldn’t do the procedure.”(2)

On top of all this, declawed animals may be at increased risk of injury or death if attacked by other animal. They are also deprived of their normal, instinctual behavioral impulses to use their claws to climb, exercise, and mark territory with the scent glands in their paws.

Any of the three methods used to declaw cats – scalpel, laser, or guillotine-type claw trimmer – changes the cat’s anatomy and physiology. Some veterinarians bandage, some don’t. When they do, they apply the bandages very tightly to control bleeding, so you can imagine those incredibly painful paws swelling up inside a rigid bandage. According to Dr. Hofve, there have been many cases of cats ultimately losing a limb because a bandage was put on too tight, or a tourniquet was misapplied.(7)

The Controversy Over Laser Declaw Surgery

There is a lot of talk about laser surgery being used in veterinary medicine. Some veterinarians claim that pets who undergo the laser declaw procedure have less pain, swelling, blood loss and faster healing time.(8) Here’s a video that shows a veterinarian using a laser to declaw a cat. Warning: Video may be disturbing to some viewers. Dr. Shawn Hook, DVM, owner and operator of the Arbor Ridge Pet Clinic in Madison, Wisconsin, explains the truths and myths concerning laser declaw surgery:

True – This is because the laser instantly cauterizes or burns the vessels as they are encountered. That being said, electrosurgery or radiosurgery units can achieve the same results that lasers can, and with less time and anesthesia.

False – With proper pre- and postsurgical pain control and nerve blocks, there have been no scientific studies showing that cats who have laser declaw surgeries are any more or less painful than those who have scalpel blade or electrosurgery declaw surgeries.

There have actually been very few scientific studies to prove what is said about laser surgery. Some veterinarians believe using a laser causes less pain, but according to Dr. Hofve there isn’t a shred of scientific evidence that it’s less painful. It does cause less bleeding, but that’s it. It looks “prettier” than the result from other methods, but it still involves burning the tissue, and there are many complications from use of a laser.(7)

The Fight Against Declawing

Laws and policies governing declawing vary around the world. For example, in many European countries the procedure is forbidden either under the terms of the European Convention for the Protection of Pet Animals(10) or under local animal abuse laws, unless it is for “veterinary medical reasons or for the benefit of any particular animal.” The Animal Welfare Act of 2006 outlawed declawing in the United Kingdom.(11) Even before the 2006 Act, declawing was extremely uncommon. The Guide to Professional Conduct of the Royal College of Veterinary Surgeons stated that declawing was “only acceptable where, in the opinion of the veterinary surgeon, injury to the animal is likely to occur during normal activity. It is not acceptable if carried out for the convenience of the owner….the removal of claws, particularly those which are weight bearing, to preclude damage to furnishings is not acceptable.”(12)

Some European countries go further, such as Finland, Sweden,(13) Estonia,(14) the Netherlands, Germany, and Switzerland,(15) where declawing cats for non-medical reasons is always illegal under their laws against cruelty to animals. The procedure is banned in at least 22 countries. However, it remains legal in most of the United States.(2)

The procedure was banned in West Hollywood a decade ago after Dr. Jennifer Conrad, an exotic animal veterinarian and founder of the Paw Project, developed a surgery that lessens the effects or reverses declawing and tendonectomies in lions, tigers, and other big cats.(2,16) More recently, in 2015, New York State Assemblywoman Linda Rosenthal introduced a bill that would make New York the first state in the nation to ban cat declawing.(17)

To date, no procedure exists that can remedy a bungled declaw of a pet cat. Advocates of outlawing the declaw procedure believe house cats suffer the same pain as their wild relatives. The Paw Project, PETA, the Humane Society of United States, Born Free USA, and both the ASPCA and the Cat Fanciers Association oppose declawing. The American Veterinary Medical Association’s position on declawing is that it should be considered only after attempts have been made to prevent the cat from using its claws destructively or when its clawing presents a zoonotic risk for its owner(s).(2) However, declawing cats is not advised by the Centers for Disease Control, the National Institutes of Health, and the Infectious Diseases Society of America.(18)

Bridget Lehet is a certified feline training and behavior specialist and a certified advanced feline fraining professional based on on Vashon Island, Washington. She obtained her certifications from the Animal Behavior Institute. Lehet owns Feline Intuition and is a volunteer with the Paw Project of Washington.