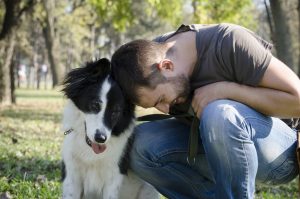 Empathy allows trainers and behavior consultants relate better to both animals and their owners. Photo © Can Stock Photo Inc

Over the last decade there has been an increasing awareness of the need to think, and act, empathically within healthcare settings; this information could be very useful for us.

Helen Reiss MD of Harvard Medical School reports a variety of benefits to both patients and clinicians by including; greater patient satisfaction; better medical outcomes for patients; greater job satisfaction and reduced burnout for professionals; better adherence to treatment recommendations.   The research has been so influential an organization called E.M.P.A.T.H.Y ™ has been founded to educate healthcare professionals in how to utilise empathy in their practice more effectively.

To me, this is information is crucial and highly relevant across all aspects of animal welfare and training delivery.   I’ve had many conversations with trainers, behaviorists, vets and nurses who feel frustrated that their advice often isn’t followed, animal welfare compromised and poor training outcomes result for both the human and non-human client.

Is it possible we can utilise this empathy research within the world of welfare and training to gain better results too? There are many potential uses for empathy within our work.   Not only does empathy have the potential for possible new ways of relating to our non-human client. It also has possibilities for improving harmony with the human half of the animal/human partnerships we see.

It is interesting to note that Swiss psychotherapist Karl Jung demonstrated amazing foresight when he said, “through scientific understanding, our world has become dehumanized”, clearly healthcare professionals now acknowledge this. I would suggest that perhaps it’s not so much our scientific understanding that is the problem, but rather our predilection for believing that science is the only reality.   Although the work of E.M.P.A.T.H.Y. ™ is focused on the neuroscience of empathy there are many multi-disciplinary perspectives of empathy notably from anthropology, philosophy and sociology, all of which have potential to enhance our practice.

To begin with though it’s helpful to think about what exactly empathy is. It’s a bit of a slippery topic to grapple with, with the potentially of confusion about what we actually mean to be empathic:

Roman Krznaric helps by offering us this definition to get started with:

“The capacity to a) be affected by and share the emotional state of another, b) assess the reasons for the other’s state, and c) identify with the other, adopting his or her perspective.”

Roman Krznaric gives us this definition: “Empathy to give a working definition – is the imaginative act of stepping into the shoes of another person, understanding their feelings and perspectives, and using that understanding to guide our actions”.

Helen Reiss MD suggests “empathy is like getting underneath the skin of another person, to merge temporarily with their experience, then getting out, to reflect on that experience.”

Both social anthropologist Kay Milton and philosopher Mary Midgley offer us a new perspective on the anthropomorphic label that can assist us.

For Kay Milton the term ‘anthropomorphic’ suggests we are directly projecting ourselves onto the other animal, believing the other animal to be ‘human like’. Milton identified that we can be well aware the other animal is not a human, instead we are simply recognizing similarities and differences by utilizing our own experiences and knowledge of the world to reflect on how it might feel to be that other animal; she relabeled this ‘egomorphism’.   Mary Midgley too believes that the use of the label anthropomorphism is misleading, she goes on to observe we have no other way of thinking about each other, or other animals, other than to utilize our own experiences.   It is when we believe the other is human that we are personifying them.

Jane Goodall’s reflection that, early in her career, she was criticized for naming her fieldwork subjects highlights another aspect of the same issue. She says of this experience:

“I was told you have to give them numbers because you’ve got to be objective as a scientist, and you mustn’t empathise with your subjects and I feel this is where science has gone wrong. To have this coldness, this lack of empathy has enabled some scientist to do unethical behaviour. More over, why deny a perfectly respectable tool?”

To complete a definition of empathy it helps to have an example. What exactly does non-anthropomorphic empathy look like in practice?

For me, a fantastic example is from Clicker-Expo Faculty member Kay Laurence. Kay’s exceptionally dog-centric awareness is never more evident than in her observation that any dog between the size of a cocker spaniel and St Bernard will struggle to walk to heel as their stride doesn’t match the stride of the average human.

In this example Kay has demonstrated Kay Milton’s theory of egomorphism; she observes and engages with what is like to be a dog in a particular context from a dog-centric perspective. She’s engaged with all of de Waals components of empathy having observed, been affected by, assessed and identified the perspective and potential problem the dog is experiencing. She then completes the process by acting upon this information; advising her human clientele of a need to compromise and recognize this ‘problem’ and address it in a dog-centric manner.

Just as a final point; some people I’ve spoken to immediately worry that being empathic is not scientific.  I’ve had the good fortune of an academically multi-disciplinary background and that helps me feel comfortable approaching topics from multiple perspectives. Just to demonstrate how others also do this too, I found this lovely example from Brian Hare, in The Genius of Dogs demonstrating that even well -known scientists are empathic.

Here he’s just leaving the Island where he’d been working with newly released Bonobos and he tells us:

“On our final day, we did not want to leave. When it was time, and we started heading from the forest to our canoe, Etumbe (one of the Bonobos) walked towards us in a determined manner. Knowing she was stronger than all of us, I was a little alarmed at her pace.  As each of us passed her to board the canoe, she looked deep into our eyes, took each of our hands, held it in her own, and shook it in a gentle good-bye. As a scientist, I have no idea what she was thinking, but as a person it was the most heartfelt thank-you I have ever received.” (Hare & Woods; The Genius of Dogs).

Empathy is a powerful tool for honing our awareness of the needs of the non-human animals in our care.  As Roman Krznaric suggests it has the potential for a revolution!

Hare, B. & Woods, V. 2014. The Genius of Dogs: Discovering the Unique Intelligence of Man’s Best Friend. One World Publications.

Milton, K. 2005. Anthropomorphism or egomorphism? The perception of non-human persons by human ones. In Animals In Person. Ed. John Knight. Berg Publishers.