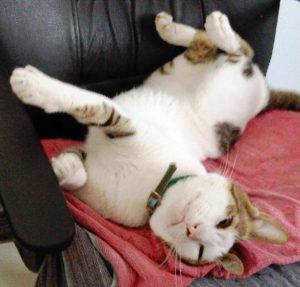 According to a study by Snowdon et al., ‘cats may ignore human music—but they are highly responsive to music written especially for them’ according to their study published in applied Animal Behavior Science.  Professor Charles Snowdon, of the University of Wisconsin, Madison, is the lead author of the study. In the study, 27 males and 20 females ‘took part’. ‘The cats were significantly more positive toward cat music than the classical,’ according to the report.

I spoke to Prof. Snowdon about the study by phone.

CS:  ‘It began with an email I received from David Teie, [composer of ‘cat music’ from the University of Maryland School of Music], who approached me about working with monkeys…they’d found in another study that monkeys exposed to German heavy metal and Mozart—that Mozart was preferred. Then they were exposed to Mozart and silence. The monkeys preferred silence so the assumption was, they didn’t like music.  Later, we explored the pitch of the music for a better emotional response, then tempos: which ones calmed which aroused use, as they have those effects upon humans.  We found his ideas worked well. We could manipulate emotions, only in the range that affected animals, and decided to work with other species.

CS: I had not realized people played music all day for their pets, when the people were away; we wondered, ‘What could this music do for them? Dogs come in such a range of size and so forth, but with cats, they’re diverse, but homogenous in size and voice.’ 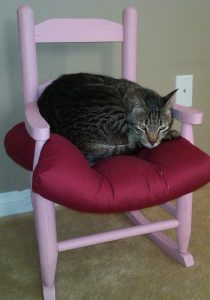 According to the study, cats prefer a minor key © Susan Nilson

JE: You’ve said that music appealing to cats has a pitch that is one octave higher than people—they vocalize in that range. Then the right tempo was, for example, based on that of purring, and the sucking sound made when kittens nurse.

CS: We found that it created a better emotional response. With us, music that has the same tempo as our resting heartbeat is calming to us. Purring is incredibly fast: 1,300 beats per minute.

CS: But purring is similar to a staccato note; it’s so fast, we’re not able to perceive individual pulses anymore, so it ‘turns into’ a slow beat, and a low one.  Maybe the pitch are diffusing in our perception, as well.

JE: You used Bach’s ‘Air on a G-String’ and Faure’s ‘Elegy’ as your test pieces, against Teie’s composed cat music. Why those? Both heavily strings, stately, both minor key, both similar tempo…

CS:  The harmonics of both don’t have dissonance, we went for affiliation. We avoided pitches due to fear sounds, threat-sounds. We didn’t want the cat to get aroused, to stimulate a threat-reaction. A minor key and slow pitch changes harmonics, so they’re more soothing. Think of species of cat, not human. Understand the pitch range; cats give calls of different kinds, affiliation is longer and higher, whereas, say, hisses are lower and not as tonal.

CS: They can, on David’s website. I have no financial interest in this, to be clear. I’m a behaviorist; we designed the study and did the work; his interest is commercial, not scientific. What was fun: we got some testimonials, one of which was, for example, ‘Our stray cat had no interest in us, but since playing the music, we’re interacting a lot more now.’ That’s cool. Some other owners have found no difference when they played the music. There is more to consider—but the potential for therapeutic use is huge.

Jane Ehrlich is a professionally trained Feline Behaviorist with over 27 years experience. She spent 18 years volunteering with the RSPCA in both clinical and behavior work and has her own consulting business Cattitude Feline Behavior in Phoenix, Arizona, although her clients are located worldwide. She also chairs The Pet Professional Guild’s Cat Committee.