Do Docked/Missing Tails Lead to Miscommunication in Dogs?

Are dogs with docked or missing tails vulnerable to miscommunication or misunderstanding by other dogs? Or do they learn to rely on other body language communication? 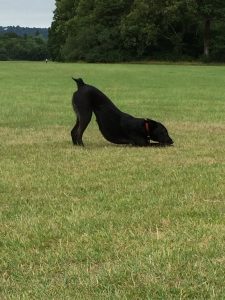 I have a little rescue dog (right) who came to me from Romania with her tail missing. I don’t know where it went or why it was removed but I have spent three years watching and being fascinated by her body language, behaviorally.

I have also noticed she has a real fear of being knocked on her rear and if she is bumped into by another dog, for example, she can spend several hours recovering. I firmly believe she is having a post traumatic episode. This is a very interesting article and piece of research on docked tails – both from a behavioral and mechanical perspective

I was lucky enough to  have had the chance to speak to my friend and mentor Sarah Whitehead and ask her her views on the question, “Are dogs with docked or missing tails vulnerable to miscommunication or misunderstanding by other dogs”. This question raises not only thoughts on my observations with dogs but the way they view the world.

“When observing dogs, it is important to understand that humans are incredibly visual. We look at a dog with its ears up, its tail up and its little sparkly eyes and we say to ourselves, Visually, what’s the tail doing?” Visually what are the ears doing? Visually, where is the dog placing itself in the situation?

And of course that means when we look at tail communication and carriage particularly, what we see is what we think is important. So we see a dog with its tail right up in the air and we understand that that means, probably some sort of social arousal or an attempt to look confident.

Sometimes they’ll quiver and you get all that piloerection – all the hair standing on end on the cat’s tail. In that situation we look at that cat and we understand that that cat is not feeling supremely socially confident. In fact it is quite the opposite, the cat is feeling defensive and anxious but it is attempting to make itself look bigger and a bit intimidating to the other cat or dog or whatever is frightening it and so it is a little bit of bluff going on. So I always ask myself a question at that stage – I am a visual being but what is actually happening with that animal? Why, functionally why is the tail in the air?

So I look at a dog with its tail right down between its legs tucked right underneath and I say to myself if I was in a world of scent rather than a world of vision what would that mean to me and I think it is an attempt to conceal scent from the other animal.

So practically speaking what does that mean for our dogs that have been traditionally docked? I think it means that they potentially get themselves into sticky situations perhaps with scent communication, that they really don’t want to be in. They have a situation where their tails are not able to conceal that area around their anus and so they actually can’t conceal the scent that says, “I’m socially confident, I’m socially aroused”

And I think therefore, that there are actually at a huge disadvantage when it comes to other dogs and communication and perhaps they get themselves into trouble as a result.  Now, some of those dogs probably go on to learn strategies in order to manage that and I actually see quite a lot of these dogs do things like, when they are greeted by another dog they’re not sure about the immediately sit down, they’ll swing their bottoms away from the other dog or they might perhaps move away, go back to their owner. So, yes, they learn strategies on how to cope with deal these difficult or uncomfortable situations, but are they disadvantaged, I think they are. So if ever there was a good reason to not dock dogs and I’m very forthright about my belief with this – to me that’s the answer, right there.”