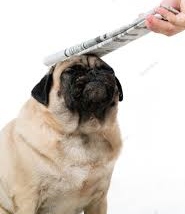 That maxim is one of the fundamental principles that health care providers are taught in school which roughly means that given an existing problem, it may be better not to do something or do nothing than risk causing more harm than good.

I believe as positive reinforcement trainers and other dog professionals, we also have a duty to do no harm. The type of harm I’m referring to has nothing to do with using aversive techniques, but rather the harm when we unwittingly pass along advice that can have serious ramifications when we don’t know how the advice will be implemented.

There was a time in my early career when I would talk to anyone who would listen about dog training and behavior, dispensing advice, especially the unsolicited kind, and never once considered how the dog owner might use this information. Remember, we are the species that apparently doesn’t know that taking a hair dryer into the shower is not a good idea, hence the warning label on the electric cord!

As I became more seasoned in the profession, I developed an appetite for scrutinizing information, some of which is folk lore that has been repeated so many times, we thing it’s true. But the other kind of information I’m talking about, is advice that could work in some contexts, but in others, could have serious ramifications.

Take for instance this advice: “When you can’t get the dog to stop barking shake a can of pennies at him.” Okay, while that could work with some dogs, providing the dog found the noise unpleasant, but what about the dog who becomes frightened and makes an association of the scary noise to, say the cat or child in the room. Or what if the dog was barking because she needed to relieve herself?

Here’s what someone told my client do do with her fear aggressive dog toward unfamiliar dogs. “Whenever she starts lunging at another dog, tell her, “Leave it” and pull her leash. This advice is loaded with pitfalls, among them, when “Leave it” didn’t stop the dog, she took the advice from a clerk in a pet shop who sold the client a prong collar. Now the dog has escalated her barking and lunging because she feels a pinch when other dogs are nearby.

How often have we read about reinforcing the dog with an incompatible behavior and given this advice? “Before the dog has the opportunity to jump on visitors, cue, “sit” and then reinforce the dog for doing the correct behavior”. The problem is that the client sometimes creates a behavior sequence of jump, sit, “good dog” because their timing is off and they didn’t fully understand when to cue the “sit” and more importantly how to prevent the jumping behavior in the first place.

Two summers ago, I watched as a young woman struggled with her large German Shepherd. The dog was pawing at his face while thrashing on the ground. When I got closer I saw that this poor dog was wearing a tight vinyl muzzle that did not allow him to pant or drink water and it was 90 degrees! When I pointed this out to her she said that her veterinarian told her to put a muzzle on the dog because he was aggressive toward other dogs! Again, sound advice, but the client didn’t know that there were basket muzzles that would allow the dog to take treats, drink water and breathe!!!

I don’t believe that in any of the examples the persons dispensing the advice had anything but the best intentions to help the pet-parent, however unless one has been thorough, there’s no way to know that the dog or human will not be harmed in some way by following the advice.

I suspect that most of us are in the profession because we love animals, enjoy working with people, and want to make sure that the caretakers have enough information to make good choices for their “fur kids”, but we need to be extra careful that we fully understand our client and, to the best of our ability, think of the many possible ways that what we say that could be misinterpreted. This is especially true when we casually answer what seems like a innocuous question, for a dog owner.

Imagine being the person who had to write the warning on the hair dryer label: “KEEP AWAY FROM WATER; DO NOT USE WHILE BATHING!” The image of that warning is always at the forefront of any advice I give.