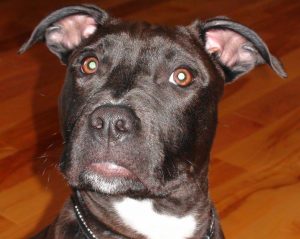 Recently a dog incident occurred in the tiny northern village of Plain, Wisconsin. As reported by TV news in the southern part of the state, a lady was walking her dog when three Pit Bulls escaped their home and rushed up to her. The lady ended up on the ground and was “scratched”.

The news report did not explain how the lady went to the ground, that there was any biting or dog fighting, or which of the four dogs scratched her. Evidently the news editor felt the story was significant enough to send an entire film crew with the reporter but did report the whole story.

As a result of the incident the village president pressed for a ban on Pit Bull dogs and other dogs that “looked like” them.

“In cases where you start having issues and people complaining about the dogs running wild and the fear factor we start to look at what do we need to do to make people feel safe,” said Ray Ring, Village of Plain president.

Ring says the ban would only impact new residents and not current Pit Bull owners.

For (victim) Marlyn, she says it’s not about the breed, but having them secure.
“A pet is like a child. I mean everybody loves their pets. I’d like to see them on a leash. I know that there’s an ordinance and it should be enforced,” said Bauer.”

The owner of the Pit Bulls was also interviewed and accepted “full responsibility” for not securing her dogs in the home.

Had the village government responded by enforcing their leash law and holding the Pit Bull owner accountable as a responsible pet steward, that would have made sense to me. Banning an entire class of dogs and their doppelgangers…but not the actual offending dogs…makes no sense to me.

(I am not suggesting the three Pit Bulls should have been banned, but at least that would have been more logical than banning others.)

Imagine that the news crew went to a village of 726 residents because of a report of a fender bender involving a red vehicle, which caused no real damage. Would the village president say “In cases where you start having issues and people complaining about red vehicles running wild and the fear factor we start to look as what do we need to do to make people feel safe.”

So how about banning all red vehicles from the village…except the ones owned by the driver who caused the fender bender? Would that be any sort of solution?

As to banning dogs that “look like” a Pit Bull, it reminds me of a Three Stooges movie short in which Moe walked up to a total stranger and slapped him in the face. The man complained “Hey, what was that for?” to which Moe replied with righteous indignation “You remind me of someone I hate!” 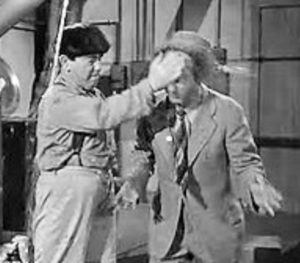 “You remind me of someone I hate!”
Photo: Cruiserforum.com

Breed specific legislation (BSL) in locations around the globe do not even agree on what a Pit Bull is, so what does one look like?  When we apply that confused logic to banning specific breeds the joke is no longer funny.

The village president stated he wanted people to “feel” safe so that begs the question, does a breed ban actually improve public safety?

The results of the research were recently published and the full study may be downloaded. Quoting from the abstract:

“Conclusion: The present study results did not observe evidence of any differences between legislated and non-legislated for both the medical treatment to victims required following the bite, and the type of bite inflicted. The significant differences in bites being reported to authorities, perceived triggers for biting, and biting locations suggests distinctly differing perceptions relating to risk between legislated and non-legislated dog breeds. Further consequences relating to the introduction of breed-specific legislation in Ireland are discussed.”

This year marks the 26th anniversary of breed ban legislation in the United Kingdom, and the number of bites requiring medical attention…have risen.

And so I return to the decision in the Village of Plain to ban dogs based upon the perception of some in government that they represent a disproportionate threat, and that TV news helped spread public fear throughout a viewership region covering most of the state, for an incident that on its face seems to not even qualify as a news story.

Does news media bother reporting fender benders that cause no harm?

I fear this  further skewed public opinion of Pit Bulls and dogs that people think look like them.  As the Creedon study showed, perception is more of a factor than breed.

The village president was also influenced by what others thought of Pit Bulls, and was quoted as saying ““I think that when we were looking at this, we also modeled it after a number of communities in the state of Wisconsin that also put in Pit Bull ordinances. So, to look at that and the issues we are facing, we are trying to protect from something more serious happening in the future,” said Ring.”

Repeating the mistakes of other legislators is not helpful and fails to protect the public from serious future events.

Banning breeds utterly misses the goal because it does not address the causes of unsafe canine behavior. The city of Calgary (Canada) bylaw 23M2006 is clear evidence of what actually makes people safe, rather than settle for the political reflex of making people feel safe.

In 1985 about 1,000 dog bites were reported in Calgary and non-breed specific legislation was passed in response. The law established requirements for responsible pet ownership, education of the public, and strict enforcement against those pet owners who chose to be irresponsible.

In 2003 only 260 dog bites were reported; a 70% reduction.  Now consider the effect of a breed ban in the United Kingdom.  Hundreds of innocent dogs have been killed and the problem of dog bites is worse.

Publicly, I criticized the news station for evidently appealing to public fear and sensationalizing the topic, without offering a balanced report. They failed to inform the public that in municipalities, states and nations around the world which enacted BSL over the past two decades, there has been no evidence of increase in public safety or reduction in dog-related injuries.

In summary, I sincerely hope that when news media report dog incidents they will balance the story with factual information about what actually improves public safety with dogs, and not inflame the misinformation already influencing citizens and public policy makers.

(Full disclosure statement: Several weeks before WMTV aired this report I wrote to the news editor explaining my experience and credentials, offering free consultation on any dog-related story they were investigating so they could inform the public with factual data. At this writing, I have received no response.)