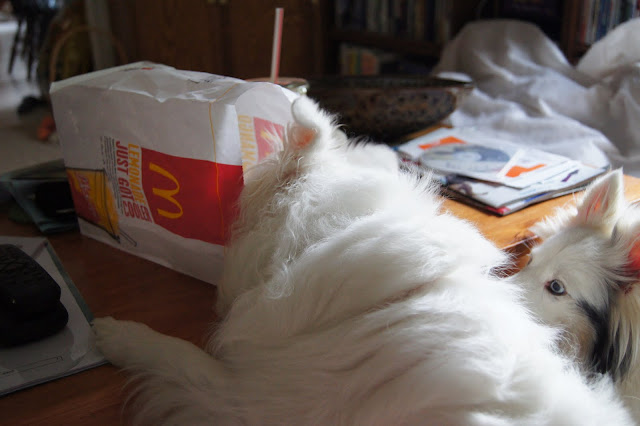 Ignoring a behavior can cause it to escalate.

If we are trying to ignore a behavior and it escalates, we will often at some point give in and pay attention because we just can’t take it anymore.  Think – the barking dog that we try to ignore and the barking just continues and continues, or gets louder and louder.  Everyone has their breaking point, right?  The trouble is, that by allowing the behavior to escalate, we’ve allowed the dog to learn how to bark longer and louder.  Thus increasing the behavior that we didn’t like in the first place.

The premise behind the suggestion to ignore a behavior is that we won’t somehow inadvertently reinforce the behavior and make it stronger.  In reality, though, is this really what is happening?  What is your definition of ignoring?  A quick search on the internet reveals the definition of ignore as follows: “refuse to take notice of or acknowledge; disregard intentionally.”

So basically, if we are ignoring the behavior, we are refusing to get involved, and we are allowing whatever is going to happen to happen without interfering.  How is this likely to change the behavior?  It’s really not.

It can also be pointed out that behavior happens for a reason.  The dog is not barking just to bark.  There is a reason.  There is something driving his behavior.  Perhaps he is bored, or lonely, or there is something there he is unsure of, or even that he’s learned that barking gets him attention.  Barking may also be a means of stress release.  There are many reasons a dog may be barking.  We are not dogs, so we cannot know for sure why, although we can speculate.

Ignoring does not alleviate the cause of the behavior.

If the dog is feeling stressed and lonely, and his barking relieves those feelings for awhile, he is rewarding himself for barking by causing his unhappy feelings to go away.  So next time he feels stressed or lonely he will be more likely to bark because he knows this will help him feel better.

When we look at the teaching aspect of changing behavior, how can we teach the dog how we would prefer him to behave in our human world if we are ignoring him and leaving him to his own devices?  Teaching and learning are both collaborative and cooperative efforts.  If we are ignoring our dog’s behavior, how can we influence that or other behavior?

Ignoring is not teaching.

If we allow the behavior to continue, our dog is practicing it over and over again, and the behavior is getting stronger and more skilled through repetition.  The more the brain and body repeat a behavior, the better it gets at doing it. This is why we need to practice to hone our skills.  Practice makes us (and our dogs) better and better.  Whatever we allow our dogs to practice – they will get better and better at!  This includes barking!

If ignoring doesn’t work to change behavior, what does work?

Can you determine a cause for the dog’s behavior?  What is driving that behavior?  There may be a way to eliminate or diminish the cause, which will then diminish the urge for your dog to behave in that manner.

What is driving the behavior?

What is reinforcing the behavior?

If you can pinpoint what the reinforcement is for your dog, you can figure out ways to manage the situation so the dog is not self-reinforcing by doing the behavior.  With the above example of barking, if the dog is reinforced for barking at the mailman because he can then watch the mailman leave, keep the dog in an area where he cannot see the mailman come or go.  If someone is yelling at the dog to be quiet, eliminate this – and help the dog with a better environment so he won’t be barking to be yelled at.  Be sure to give tons of attention instead when he is quiet, even for short periods of time.  And so on.

We always want to set up the environment and situation to set the dog up to be successful with the behaviors that we do want to see instead.  Take time to decide what you do want the dog to do instead.  Be specific.  Instead of barking, what do you want the dog to do instead?  Lie on a dog bed chewing a bone?  Bring you a toy when someone is at the door (the toy to help keep his mouth busy instead of barking)?  Etc.

Set up for success!

Take time to teach your dog that new behavior that you want to see.  Teach it in a different area and context than where the old behavior (that you don’t like) is happening.  Don’t start to teach an alternative behavior for barking in areas where the dog is already barking.  Teach your dog the new behavior until he knows it very well and it’s easy for him.  Then gradually bring the new behavior into the environments that would normally trigger barking.  Set your dog up for success and move through this gradually.  Begin at a distance from the area or activity.  If your dog has trouble, move farther away.  If he gets it right easily, move a bit closer.

In order for behavior changes to become long-lasting, we must also think about the many hours in a day that we are not actually training.  How can we lessen barking in those moments as well?  (Or whichever behavior you are trying to change.)  Remember that if your dog is barking, he is practicing the behavior of barking and getting better at it.  You don’t want him to practice barking.  You want him to practice being quiet.

How can you set him up to be successful in being quiet?  Enrichment activities are always super in any type of behavior change program, as they occupy the mind and the body.  Gates can be used to section off the dog’s space into areas he can be successful in (gates positioned so he can’t get to windows to see that mailman).  Music can mask every day sounds that may trigger barking during the day or night.  The idea is to prevent the old behavior from happening and encourage the new behavior (in this case quiet) as often as possible and for as long as necessary for the new behavior to become a habit.

Encourage feelings of well being.

Is all this a lot of work?  Well, it can be if the old behavior has been allowed to become a habit and if the dog has been allowed to practice it for awhile and get really good at it.  The good news is that dogs never stop learning.  And … dogs do what works and brings them things that they like and feelings of well being.  If we take the time to set up their environment and activities to provide for lots of reinforcement (things they like) for behaviors we want, and to help them feel stress-free, safe, and happy, we can begin to easily shape behavior into what we want – and what our dogs want.

Debbie Bauer, HTACP, operates Your Inner Dog in the Effingham, Illinois area and has over 25 years of teaching and consulting experience working with dogs and their people. She specializes in working with dogs that display shy, fearful and reactive behaviors and also has extensive experience working with dogs with special abilities, including deaf and blind/deaf dogs. Bauer has trained dogs in a variety of fields, including therapy work, flyball, herding, print ad and media work, obedience, rally, agility, musical freestyle, conformation, lure coursing, tricks and scent work. She has over 13 years of experience with custom-training assistance dogs, including medical alert dogs, to match the specific needs of each person.  Her special interest lies in educating the public about dogs which are homozygous merle (often called double merle), and about how deaf, blind, and deaf/blind dogs can live happy fulfilled lives as part of a family.