Does Your Animal Have Control? 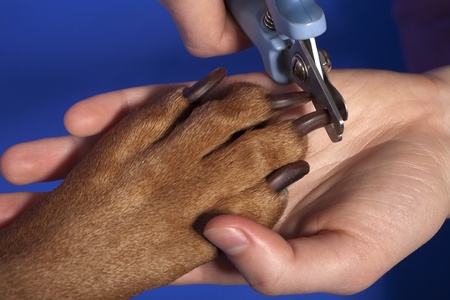 Who’s controlling the cut? You – or the dog?

Many animal trainers, veterinarians and pet owners highlight the importance of controlling animals. Controlling them, as in restricting the animals’ movement, their choices and their opportunities to control their environment through their behaviour.

Sometimes you have to, for safety reasons. Obviously.

But often you don’t – and more often than you might think. Actually, the trend in modern animal training is to deliberately and strategically shift control from the handler to the animal, while still staying safe.

Giving control to the animal – or the illusion of control – has many advantages, including reducing fear and improving well-being. This concept of agency, of being capable of acting, making choices, and resolving problems, is of huge importance, for animals as well as humans. Empowerment has direct and measurable health benefits.

And paradoxically, by giving control to the animal rather than restricting choice and control, the situation often turns out safer, since the animal is less fearful and less likely to switch into defensive aggression.

This blog post is not about all the advantages of providing control to animals. Rather, I want to discuss some of the ways that you can increase control for animals during formal training sessions.

Actually, this blog post came about as an excuse to publish a film that I wanted to share with you. I just need to frame it, give it context.

But first, see if you can make sense of the infographic below.

Say you do one short training session a day. Let’s dive in and look at all the opportunities of letting the animal in on the decisions to be made.

Now, some of my readers may be arguing that it’s preposterous to give animals control over all aspects of training.

That’s not what I’m saying that you should do. After all, you have options, too, and one of them is to choose when to hand over control to the animal – and when not to.

As always, it depends when and where it’s appropriate to leave the decision making to the animal. And often, the illusion of control works just fine. In other words: you decide which options you can live with, and you let the animal choose between those options. An example from my recent past would be offering two sensible long-sleeve t-shirts to the 6-year-old child, and letting him chose whether it’s to be batman or dinosaurs. He thinks he’s controlling what he wears, but you know that you just avoided the favored sleeveless top that would have been too cold.

As a trainer, you set up the choices so that the outcome is always one that’s acceptable to you. 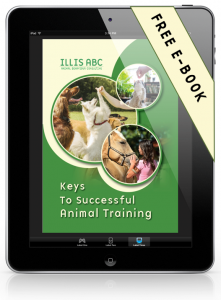 Let’s have a look at a training session illustrating one of these choices during a training sessions, namely the choice to initiate a single trial within the session. Yes, we’re finally getting to the film! You need the back story before you watch it, or else you’ll be annoyed that I’m oooohing and aaaawing throughout the video. You might still be annoyed, but at least you’ll know why.

Back in 2013, I was visiting my friends Carolina Fransson and Hedvig Zetterberg to watch some horse training. Not being a horse person myself, I was intrigued. And the training session you’re about to see was, without doubt, the most memorable moment of that day.

They said: “do you want to see some hoof lift-training?”, to which I enthusiastically responded “sure, yeah!!” As they were setting up the training scenario and refilling treat bags, they brought out a red bucket. I asked: “is that a target?” thinking that perhaps they’d used the bucket as a hoof target to teach the behaviour or lifting the hoof. Carolina said: “mmm, she touches the bucket and then she lifts her hoof”.

I remember being utterly confused by that comment. Frankly, I didn’t understand a thing, I was entirely set on my hoof-target idea. But I just let it go, shrugged and started filming. And after the first hoof lift, comprehension dawned on me – I finally understood what Carolina had been saying. And I got really excited. Super-excited. Jumping-up-and-down excited.

So there I was, filming and trying to keep the camera level, and trying desperately to keep quiet and not ruin the recording by blabbering excitedly. And of course, after a while I cracked and ruined the recording by blabbering excitedly. I’ve edited out most of it, but there’s still a fair bit of oooohing. So, you’re warned. Perhaps you want to watch this with the sound off.

See what happens? Giving control to the animal doesn’t mean that the whole training session goes haywire. Rather, it shifts the nature of the interaction from an authoritarian focus on obedience to one centered on collaboration.

This was the first time I witnessed a so called “Yes-target” or a “start button behaviour”. Quoquette initiates the hoof lift. In the infographic above, this corresponds to the animal initiating the trials in the training session. She presses the start button, as it were.

She touches the bucket with her nose, indicating that she’s ready. Hedvig then offers her hand in response to Quoquette’s signal. Quoquette lifts the hoof. Hedvig holds on for a few seconds, sounds the clicker, releases, and gives a food treat.

Hedvig mentioned two things that have really stuck with me. Earlier, they used to train the hoof lift without the bucket, and she noted the following difference once they added it and Quoquette learned that she can initiate the training trials:

Revision: One additional tweak that could be used in addition to the “yes”-target would be some way of communicating “no” or “I changed my mind”. The bucket game concept, introduced by Chirag Patel (Domesticated Manners) is one way of doing that.

Initiating or saying “no, I changed my mind” to the training trial are but two of the many things you can offer your animal during a training session! Also, there are 24 hours in a day and training only occurs for a negligible fraction of that time.

So. How much control are you giving your animal outside of training?

Karolina Westlund helps pet owners and people working professionally with animals to get happier, reasonably well behaved animals that thrive in the care of humans. She teaches animal behaviour management through blog posts, the odd Facebook live session or webinar, as well as more extensive online courses. She is an associate professor of Ethology at Stockholm University, Sweden and sometimes publishes scientific articles related to enrichment, animal training, and wellbeing.